Every Freak In The GOP Freakshow Gets Ready To Rally 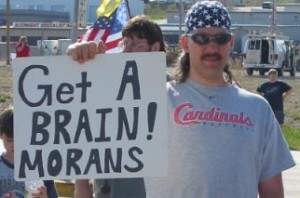 Joey Bunch at the Phil Anschutz-owned Colorado Springs Gazette obligingly helps publicize a big-ish upcoming event for Colorado conservatives, rallies this Friday across the state to express displeasure over the full range of legislation passed by majority Democrats this year:

Organizers contend that legislators are making it more expensive to live in Colorado, while making people rely on the government and driving companies from the state.

“Hardworking, every day folks seldom ‘do’ rallies,” Kim Monson, leader of the Stand For Colorado team, said in a statement. “May 10th, Coloradans will come together to send a message to the out-of-control politicians and bureaucrats that we are watching, we care and we are concerned about the future of our state.”

The rallies are organized by long-running local right wing talk radio hosts known as the Americhicks, who host a morning show on the B-list (even by AM radio standards) AM560 KLZ. But the list of speakers for Friday’s rallies run the gamut of conservative conspiracy theorizing:

That looks like everybody! From “red flag” misinformation to “forced voter registration” to “hypersexualization of our children” to the “forced vaccinations,” Friday’s rallies should feature every part of the crazypants coalition aligned against Colorado Democrats who had the temerity to win an election six months ago and then legislate accordingly. Now, you may rightly wonder why people who might someday want to be considered serious contenders for higher office–here’s looking at you, Heidi Ganahl–would jump on the hypersexualized forced-vaccination crazy train?

The answer is simple: this is the Republican coalition now. And to the radicalized conservative grassroots, these disparate issues all run together in a low-information vortex of fear and loathing. The lesson of these rallies is that there’s no point in trying to compartmentalize the motivations of organizers of a possible recall against freshman Rep. Rochelle Galindo, hateful vs. “legitimate,” when conservatives make no attempt at such distinctions among themselves.

The fringe and the “mainstream” of the GOP share the stage. Let’s stop pretending they don’t.