Ted Nugent: Tancredo For Governor (And To Save America) 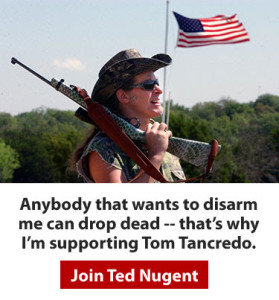 In a fundraising email blast sent a short while ago–noted for the record:

Yes – this is that Ted Nugent, and you're probably wondering why the hell I would be emailing you.

Well, I'm not just a rock star and bowhunting addict. I'm a gungho American first and a dedicated patriot fighting for liberty – just like you. And like you, I'm terrified by where Barack Obama and his radical America hating leftist goons are leading this great country. Aren't you?

We all better wake up and fight back together before it's too late!

Thankfully there are some heroes we can count on to lead the fight – heroes for liberty like Tom Tancredo.

But the clowns in some "we the sheeple" Governor's Mansions and in the White House are making America look idiotic. They've hijacked our healthcare system so we have to pay higher prices for lesser care. They are forcing those of us who work hard to pay even more money into a broken system so they can turn around and give unearned handouts to scammers who prefer sitting on their couch to looking for a job…

Tom is a former U.S. Congressman who made waves in Washington by vehemently opposing President Bush's wasteful spending spree, amnesty for illegal immigrants, and insane infringements to our sacred Second Amendment rights. Now he's running to be the next Governor of Colorado – a state at the forefront of the gun control debate – and I'm doing everything I can to make sure he wins.

Will you please help me save America? [Pols emphasis]

It's Tom Tancredo who's going to "save America," not Ted Nugent. But maybe we're just getting technical.