Winners and Losers from 2018 Legislative Session

Since all political websites are legally required to produce a “Winners and Losers” list from the 2018 legislative session, here’s our contribution…

Rep. K.C. Becker
The House Majority Leader took a major political risk when she introduced a resolution to expel Rep. Steve Lebsock from the legislature, but she pressed forward with what she felt was the right thing to do and was ultimately validated for that decision. Lebsock, of course, was booted out of the State Capitol after a daylong hearing on March 2, marking the first expulsion of a sitting lawmaker in Colorado in more than 100 years. But it’s easy to forget that it wasn’t clear that there were enough votes to support expulsion when Becker was preparing the proposal (indeed, House Minority Leader Patrick Neville was working hard to hold Republicans together for a ‘NO’ vote). 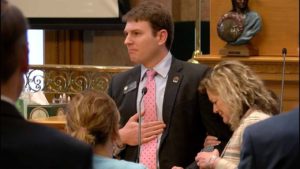 Rep. Alec Garnett talks about the bulletproof vest he wears to work.

Rep. Alec Garnett
The two-term Democrat from Denver played a significant role in some of the most important discussions of the session, including partnering with Republican Rep. Cole Wist on a late attempt at passing controversial “Red Flag” legislation. Garnett was also responsible for one of the most powerful moments in many years at the legislature when he revealed — during Rep. Steve Lebsock’s expulsion hearing — that he had been wearing a bullet-proof vest under his dress shirt since the beginning of the session.

The next Speaker of the House will almost certainly be either Garnett or House Majority Leader K.C. Becker; both lawmakers proved in 2018 that they are up to the task.

Rep. Alex Skinny Winkler
Thornton Republican Alex Skinny Winkler was turned into a real boy legislator in late March to fill out the final six weeks for expelled Rep. Steve Lebsock. Winkler will now turn his attention to campaigning for a full term in HD-34, but residents in this Democratic-leaning district will almost certainly vote for a “Skinny Repeal” in November and return the seat to Democratic hands.

Oh well. At least Winkler gets to keep that giant legislator nametag.

Sen. Kerry Donovan
The first-term Senator represents one of Colorado’s largest (geographically-speaking) and most diverse districts in SD-5, and she delivered for rural Colorado in a big way in 2018. Donovan was a driving force behind two measures that will build out high-speed, broadband Internet service in some of the state’s most hard-to-reach areas, giving voters good reason to approve her re-election bid this fall.

RMGO
Dudley Brown and his Rocky Mountain Gun Owners (RMGO) group have been relatively quiet in recent years, but they returned with force late in the legislative session to effectively kill bi-partisan “Red Flag” legislation that sought to temporarily remove firearms from the hands of emotionally-unstable Coloradans. The “Red Flag” bill had high-profile co-sponsors — Rep. Alec Garnett (D-Denver)and Rep. Cole Wist (R-Centennial) – and prominent support from the Colorado law enforcement community…but when Brown put his foot down, most of the Republican caucus scattered like cockroaches.

We would certainly argue that the RMGO’s militant opposition to any sort of gun violence legislation is neither sustainable for the organization nor helpful for House and Senate Republicans, but that’s not really the point here. The RMGO’s penchant for getting aggressively involved in Republican Primaries over the years has scared the wits out of the even the most right-wing legislators; Dudley Brown asketh, and RMGO receiveth.

Anybody Who Profits From Photocopiers and Ink Sales
There were a record number of bills introduced during this legislative session that together formed an absolute mountain of paper documents. The House and Senate combined to produce 786 different pieces of legislation, which works out to an average of nearly 9 bills for every member.

Republican Leadership
Whoever invented the phrase “herding cats” would have loved watching Colorado Republicans over the last couple of months. Both Senate President Kevin Grantham and House Minority Leader Patrick Neville had a hell of a time corralling their respective caucuses; Republican lawmakers largely planted their flagsalongside a right-wing base and a few heavy-handed interest groups (see RMGO above), leaving virtually no room for compromise. Internal battlesplayed out regularly as members such as Rep. Dave Williams prioritized short-term soundbites and appearances on Fox News over getting anything done in the legislature. Even (theoretically) straightforward decisions turned into public freak-out sessions.

Sen. Tim Neville
In 2015, the Jefferson County Republican looked like the next big thing for the Colorado GOP, pulling the strings for the caucus behind the scenes and setting himself up for a U.S. Senate run. Neville’s statewide ambitions were rudely extinguished at the 2016 Republican State Convention, and he’s now one of the top targets for Democrats in 2018 as they look to re-take control of the State Senate. Neville has obstinately remained a right-wing voice in a senate district that is fairly equally-divided among Democrats and Republicans. In his last legislative session before asking voters to send him back for another term, Neville continued to act like a lawmaker from a solid-red area, seemingly showing no interest in trying to appeal to the rest of the voters in SD-16. 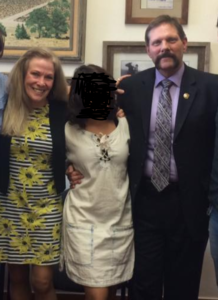 Sen. Randy “Boob Grabber” Baumgardner
State Sen. Randy “Boob Grabber” Baumgardner narrowly escaped expulsion from the Senate in April thanks to Sen. Cheri Jahn and some helpful covering-up by Senate President Kevin Grantham and Senate Majority Leader Chris Holbert. Colorado Pols readers are plenty familiar with Baumgardner’s story, so we won’t rehash his terrible year in this space. We’ll just leave it at this: When your legislative legacy is earning the nickname “Boob Grabber,” you can be confident in your place as a 2018 “Loser.”

Sen. Cheri Jahn
State Sen. Cheri Jahn (Wheat Ridge) served four terms in the State House and is on the back end of her second term in the State Senate. Her (likely) final legislative session played out in strange fashion, leaving her a questionable legacy and an even murkier political future.

Jahn spent the bulk of her career as a Democrat before announcing in late December that she had changed her party registration to “Unaffiliated,” thus relegating herself to a caucus of one for her swan song under the Gold Dome. It is unclear how Jahn might have benefitted from her newfound “independence,” other than perhaps setting herself up for a job with a group like the “Centrist Project.” Jahn has long been a champion of predatory payday lenders and whatever cause was supported by right-leaning “business” lobbyists such as CACI (Colorado Association of Commerce and Industry), so her departure from the Democratic Party was thus both unexpected and unsurprising.

Jahn will perhaps be most remembered for her curious “NO” vote that saved Sen. Randy “Boob Grabber” Baumgardner from being expelled by the State Senate over multiple charges of sexual harassment. That’s not ideal.

Governor John Hickenlooper
Hickenlooper called the 2018 legislative session the most successful of his governorship, which is interesting because the Governor appeared to have very little to do with anything that happened in the last five months. Hickenlooper took no political risks in his final legislative session – normally a time when an incumbent Governor makes a push to shore up a legacy – and seemed to spend most of his time “aw-shucksing” questions about a potential bid for President in 2020. When he did speak out on an issue, Hick displayed a maddening propensity for carefully taking every side possible – even on questions about sexual harassment under the Gold Dome.

When Hickenlooper made a last-minute pitch to House and Senate Democrats (he showed up at 10:00 pm on the final day of the session to wrangle votes on a PERA reform bill), it was emblematic of his 8 years in office and a Dickensian glimpse of what might have been.