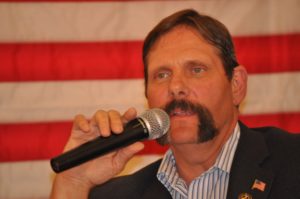 Denverite had the story ready to go:

Baumgardner was investigated for sexual misconduct based on allegations made by a former legislative aide that were found credible by a third-party investigation, according to the Associated Press. The resolution read Monday said Baumgardner allegedly grabbed and smacked an aide’s buttocks multiple times during the 2016 legislative session.

The tone during Monday’s debate was far more business-like than last month’s emotionally-charged deliberations in the House that ended with then-state Rep. Steve Lebsock’s expulsion.

The final vote on the resolution to expel Sen. Randy Baumgardner over allegations of sexual harassment that were confirmed credible by an outside investigation conducted by the Mountain States Employers Council was 17-17 with Sen. Baumgardner abstaining. GOP Sen. Ray Scott unexpectedly crossed party lines to vote to expel Baumgardner, while “Pretendocrat” Sen. Cheri Jahn (U) voted with Republicans against Baumgardner’s expulsion.

NARAL Pro Choice Colorado had their statement ready, too:

Sexual harassment should not be tolerated in the Capitol, or any where else. Senator Baumgardner, like Rep. Lebsock, should have been expelled.

Everyone should be held to to the same standard and everyone deserves to feel safe at their place of work. That includes those aides and interns an independent investigator found Sen. Baumgardner more likely than not harassed.

This is fundamentally about the abuse of power and the public trust. Those that abuse their power to take advantage of others betrays the public trust and should not remain in the building. Sexual harassment isn’t partisan and a harasser’s party identification should not matter.

Speaker Duran and members of both parties in House of Representatives held a member of the majority party accountable for his actions towards women. The same standard should apply in the Senate with Senator Baumgardner.

We stand with Senator Baumgardner’s victims, and with all survivors of sexual abuse and harassment.

The failure of tonight’s vote was fully predictable. In the last two weeks, conservative blogs, social media, and friendly journalists in the Capitol press corps have flooded the news cycle with “hot take” defenses of Baumgardner along with other storylines intended to discredit and downplay sexual harassment allegations. Senate President Kevin Grantham’s bad faith in negotiations with Democrats over the fate of Baumgardner and two other Republicans credibly accused of harassment and diversionary slander against Sen. Daniel Kagan further indicated that accountability for Baumgardner was not in the offing. The night-and-day contrast between the handling of sexual harassment allegations by the Democratic-controlled House and the GOP-controlled Senate is, with this vote, clearly defined for voters in the November elections–where we fully expect voters to dispense the justice Baumgardner’s victims were denied this evening.

Until then, all women at the Capitol can do is stick together–and make sure the new employees know who to stay away from.

If this victory for the status quo sounds disgraceful to you, that’s because it is.