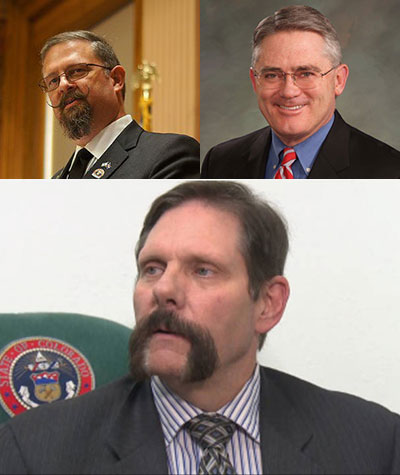 Senate President Kevin Grantham is never going to be included in anybody’s definition of “courage,” but he’s running out of excuses in his steadfast refusal to do anything about even more claims of sexual harassment against Sen. Randy “Boob Grabber” Baumgardner.

As Bente Birkeland reports for KUNC, there are a lot more fingers pointing at Baumgardner…as well as Grantham and Senate Majority Leader Chris Holbert:

An investigation determined that eight people’s allegations of sexual harassment and inappropriate behavior from Sen. Randy Baumgardner were credible. The findings, by Littleton-based Alternative Dispute Resolution Inc., an independent firm, are in addition to earlier allegations a separate company found to have more likely than not occurred.

The ADR report covers two separate complaints. For one of them it said Baumgardner, a Hot Sulphur Springs Republican, created “an intimidating, offensive, and hostile work environment” for five non-partisan Senate staffers in 2016, and “substantially interfered” with one woman’s work performance. The report found it credible that he also had a nickname associated with his behavior, the “boob grabber.”

Before we go any further here, it’s important to note that this is a completely separate investigation about sexual harassment claims against Baumgardner aside from those that have already been extensively reported.

In February, Grantham all but excused multiple claims of harassment against Baumgardner in part by alleging that the investigation into those claims — from a company called “Employers Council” –was biased in some way. It is Grantham who pushed for a new company to be hired to investigate further accusations, and that’s how this report from Alternative Dispute Resolution (ADR) was created. We now have reports from two different companies investigating multiple claims of sexual harassment against Baumgardner, and every single one of those accusations were found to be “credible.”

In fact, there are now so many sexual harassment claims against Baumgardner that we literally cannot keep track of them all. Either this is the greatest conspiratorial setup of a sitting legislator in Colorado history, or Baumgardner is a serial sexual harasser. Common sense would indicate the latter, but Grantham isn’t going to budge from backing Baumgardner. As the Associated Press reports:

Now, if you’ve been following this entire story of sexual harassment at the state legislature, you’re probably aware that Sen. Baumgardner was very nearly expelled from his seat earlier this month. Baumgardner was spared expulsion on a near-party-line vote (with “Independent” Sen. Cheri Jahn siding with Republicans). But as Bente Birkeland reported today, Baumgardner may have also been saved because Grantham and Senate Majority Leader Chris Holbert buried the existence of more claims against Baumgardner:

The report is dated March 30, 2018, Good Friday, a day off for legislators and staff. The following Monday, April 2, the ADR investigator, Kathryn Miller confirmed to our sources that she had submitted her findings to Senate Secretary Effie Ameen. That was the same day Republican Senate Majority Leader Chris Holbert, who controls the chamber’s calendar, scheduled  an unexpected vote on a Democratic resolution to expel Baumgardner after weeks of pressure from Democrats to do so.

Yet the additional details were not considered in the expulsion vote, only the findings of a single investigation that concluded  Baumgardner more likely than not grabbed and slapped a former legislative aide’s buttocks. While Ameen had the new findings, the investigations were still considered to be open until April 11 because the investigator stated Baumgardner was refusing to be interviewed. She said his actions held up the release of the report by about a month. [Pols emphasis]

The findings of the ADR report into additional allegations against Baumgardner were available before the expulsion hearing, but Grantham and Holbert sat on the new information.

Senate Republican leadership has protected a serial sexual harasser for months, and they continue to stand in the way of any sort of action despite countless accusations. If this culture is going to change in the State Capitol, it’s going to be because voters forced it to happen by stripping Republicans of their Senate Majority in November.