UPDATE: The Denver Post’s John Frank reporting that Democrats will proceed with a resolution to expel Sen. Randy Baumgardner from the Colorado Senate.

On the heels of Tuesday’s announcement, Senate Democrats pledged to ratchet up the political pressure, telling the Post they plan to introduce a resolution to expel the embattled Republican.

Under the Colorado Constitution, each chamber has the ability to remove one of its members from office for bad behavior by a two-thirds vote. But it has only happened once — the 1915 expulsion of Rep. William Howland in the wake of a bribery investigation.

Without Republican support, the effort’s certain to fail. Each chamber has “considerable discretion” in determining the procedure for doing so, according to an Office of Legislative Legal Services memo.

A few moments ago, Sen. Randy Baumgardner announced what Republican Senate leadership apparently considers to be closure of Baumgardner’s sexual harassment case. Rather than try to explain Senate President Kevin Grantham’s action–or inaction as the majority of our readers will see it–here’s the letter from Grantham to Baumgardner in its jaw-dropping entirety: 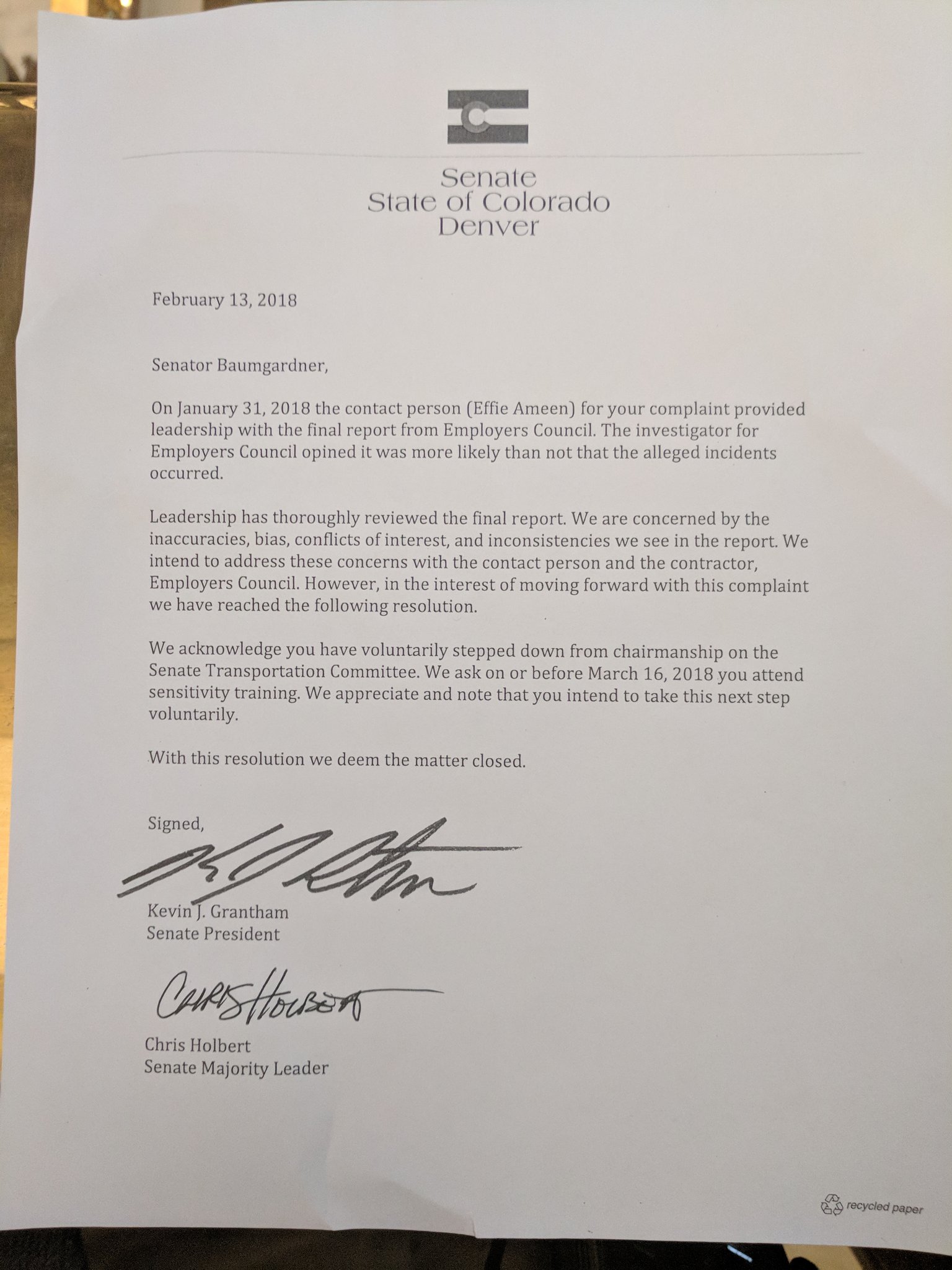 After grudgingly noting the conclusion of the Mountain States Employers Council that the allegation against Sen. Baumgardner is credible, Grantham proceeds to attack the investigation’s “inaccuracies, bias, conflicts of interest, and inconsistencies” before acknowledging Baumgardner’s “voluntarily” stepping down as chair of the Transportation Committee. Apparently Baumgardner is voluntarily taking some manner of “sensitivity training.” No specifics about the investigation that led to Grantham essentially disregarding it have been disclosed.

With this resolution we deem the matter closed.

Folks, this is the worst possible response by Colorado Senate leadership to an accusation of sexual harassment that has been found credible. The magnitude of this error cannot be overstated. Politically, it will wreak havoc on Republicans all over the state, and perhaps beyond to the extent the story makes it into national news. Which is likely: all over the country the issue of sexual harassment is disrupting business as usual in state legislatures, like in Arizona where just last week Rep. Don Shooter (R-Yuma) was expelled by a 56-3 vote in that state’s GOP-controlled House.

Sexual harassment by men in positions of power in the workplace is an issue that has exploded into the public consciousness since the election of Donald Trump. Although Trump outlasted the army of women who accused him of sexual misconduct and assault long enough to get elected President, the backlash against men who commit sexual harassment his election provoked has dragged a hidden culture of abuse and victimization at every level of society into the light once and for all. Powerful men have had their despicable behavior exposed to the world, and the revulsion the world responds with is in very many cases career-ending.

But not in the Republican Colorado Senate.