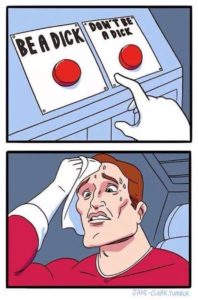 The Denver Post’s John Frank updates with the latest word from a standoff in the Colorado Senate over the fate of Sen. Randy Baumgardner, a sexual harassment complaint against whom has been found credible by outside investigators prompting every Democrat in the chamber to call for Baumgardner’s resignation:

Senate President Kevin Grantham, the top Republican in the Colorado legislature, said Monday he expects to make a decision by the end of the week on whether to discipline a fellow GOP lawmaker after a sexual harassment complaint.

The movement follows a week when Grantham faced significant pressure to take action against state Sen. Randy Baumgardner, of Hot Sulphur Springs, who faces a substantiated complaint that he slapped and grabbed the buttocks of a legislative aide multiple times during the 2016 legislative session…

The Senate president blasted Democrats for creating a “partisan circus” with the call for Baumgardner to resign and pushed back against those who suggested he is delaying action in the case.

Senate President Kevin Grantham has reportedly been in possession of the investigative report on Baumgardner’s conduct since the end of January. Predating this latest complaint, however, and as we’ve said numerous times since the General Assembly’s sexual harassment scandal first broke, Baumgardner’s alleged behavior toward women with business at the Capitol was very widespread knowledge for many years prior to 2018. Much like with Rep. Steve Lebsock in the House, it’s impossible for Grantham to argue he had no knowledge of Baumgardner’s conduct because everybody else did.

But unlike Lebsock, Randy Baumgardner wasn’t bounced from his committee chairmanship. He wasn’t pulled off prime sponsorship of Senate Bill 1, the chamber’s showcase transportation bill. While Democrats in the House called for Lebsock to resign as the stories about his conduct snowballed, Grantham and Senate Republicans turtled up in self-defense–continuing to promote Baumgardner in the press, and taking no action whatsoever to protect women at the Capitol from further offense. Women who had potentially been victimized by Baumgardner had no choice but to continue to deal with him if they wanted to work on legislation of his or before his committee.

The two weeks that Grantham has sat on a report validating this most recent sexual harassment charge, with no action taken to even prevent it from happening again, demonstrates nothing short of contempt for Baumgardner’s victim(s). There is absolutely no excuse for stalling action so long after this report was issued–and given the possibility of Baumgardner doing this to another woman, every day nothing has been done is a moral indictment of Republican Senate leadership.

And for Grantham to claim injury from Democrats demanding this situation not be allowed to continue is…astounding.