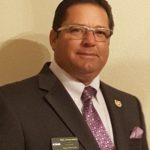 Readers will recall Rep. Phil Covarrubias of Adams County, the Republican who made national headlines one year ago when he defended the internment of Japanese-Americans in World War II during a legislative debate about national security and immigration. After establishing himself as the new standard-bearer for xenophobic buffoonery in the Colorado General Assembly, Covarrubias apologized–but has on other occasions done plenty to reaffirm his foot-in-mouth credentials.

Last Thursday, Rep. Covarrubias left the crowd in attendance at the debate in the House Health, Insurance, & Environment Committee over two bills to respectively place onerous restrictions on and ban outright abortion in Colorado picking their jaws up off the floor after he, among a long list of other offenses, compared abortion rights to prostitution. Yes, really:

Transcribed with time stamps from the original committee audio of the eight-plus hour hearing:

COVARRUBIAS: Thank you Madam chair, and thank you all for being here. As people of God, where do men’s rights fall in with all the love and compassion…towards how the man feels…where does that fall in, in your perception of this taking place?
…

Rev. Garland: …I think the man’s position is to support the woman in whatever decision she makes, to get some counseling and um, support, um …it’s a matter of ratios and the woman’s got a whole lot more into it, than any man involved.

COVARRUBIAS: Thank you Madam chair, and thank you for being here. We’ve seen across our country where judges will absolutely dismantle our constitution for their own work…with sanctuary cities, illegal immigration…they will protect people who aren’t even citizens, they’ll protect their rights. So we’ve seen where judges and courts will politicize and weaponize their power in order to do what they want for political expediency. And that’s just disgusting…but it happens everyday and now were finding out more and more of how much this has been going on across our country for the last several years. It’s all coming out now. And I wanna know why, or do these unborn children, babies, have any rights, or if they don’t, why not?

COVARRUBIAS: Thank you Madam chair, and thank you for being here. In 2014, there was 324,000 babies killed through abortion, millions and millions since Roe v. Wade, over 55 million babies have been killed. I’m wondering, is there a statistic on how many of those were necessary, how many of those were from actual rape of incest as opposed to the other…what percentage is that, would you happen to know that?

Ginal: Representative Covarrubias, that question was uncalled for and Miss Schall(sp?), You do not have to answer the question.

COVARRUBIAS: Thank you Representative Humphrey and to everybody who’s stayed, who’s been here. It’s been another one of those incredible nights. I guess, you know what really bothers me, about being in this building, is the absolute hypocrisy, because the very same people who are willing to kill babies, are willing to keep murderers and rapists alive on death row, and will oppose the death punishment and willing to protect their lives.

COVARRUBIAS: Were talking about 70 to 30 % votes, um, that it could be sentenced to death. I would say, those votes have sentenced millions to death—when it comes to abortion. I appreciate that you brought your bill and the conversation we’ve had and I always learn a lot, but I’m definitely going to support you on this representative.

As you can see, employing the most offensive words possible is not a bug for Rep. Phil Covarrubias.