UPDATE: Honorable mentions to Denver7 and the Pueblo Chieftain for covering this important story on Friday. 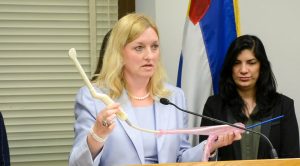 Ultrasound wand. Some of you know where it goes.

The Colorado Independent’s John Herrick reports on hearings yesterday in the Colorado House on two Republican-sponsored bills: one banning abortion outright and another imposing onerous medically unnecessary requirements to abortions in Colorado with the clear intent of making them harder to get:

Democrats on Thursday blocked a bill that would have required doctors to offer women seeking an abortion an ultrasound of the fetus 24 hours before the procedure and, if available, an audio of its heartbeat. Doctors also would have had to to inform the patient of the health risks of an abortion.

The bill failed in the Health, Insurance and Environment Committee on a party line 7-6 vote…

[D]octors and women who testified on the bill said it could lead to physicians giving out medically inaccurate information. And other provisions of the bill, they said, would have the effect of making it harder to get an abortion.

[Rep. Lori] Saine has proposed similar bills in the last two years without success. It is one of three bills introduced this legislative session that would restrict or criminalize abortion. In a split legislature, with a Democrat in the governor’s office, the bills are destined to go nowhere.

Another bill, sponsored by Rep. Stephen Humphrey, R-Eaton and Sen. Kevin Lundberg, R-Berthoud, among others, would make it a crime to perform an abortion. Voters have rejected similar personhood proposals, which define life as beginning at conception, when they voted down ballot measures in 2008, 2010 and 2014. The two have proposed the same bill every year since at least 2016.

Victoria Gomez Betancourt with the Colorado Organization for Latina Opportunity and Reproductive Rights, said these kinds of measures perpetuate a dangerous culture of silencing and shaming people for their reproductive health care decisions: “That seek to demonize people for seeking abortion care or other types of reproductive health care services,” Gomez Betancourt said. “That becomes an obstacle for having frank conversations in the family space or with health care providers.”

…According to the Population Institute’s annual 50 State Report Card on Reproductive Health and Rights, the nation as a whole slipped from a “D” to a “D-minus” because of tightened state and federal policies that limit access to contraceptive and other health care services. [Pols emphasis]

Our understanding is that dozens of women showed up yesterday to testify against these two bills. The abortion “information” bill debated yesterday included a requirement to notify women about the dangerous practice of “abortion reversal, and the other was legislation to make abortion a class 1 felony in this state–which would obviously trigger a court battle to overturn the historic Roe v. Wade decision upholding abortion rights.

Colorado is fortunate that the state’s all-female and pro-choice leadership in the House means these bills don’t go far–for now. But in other states, they do. So-called “abortion reversal” legislation has passed in the Arizona legislature, mandatory ultrasounds in many states, and the abortion restrictions in House Bill 18-1082 were actual Texas law before being struck down by the Supreme Court in 2016.

With all of this in mind, the overall lack of press coverage of yesterday’s abortion bills is a real problem. We get that the press corps is stretched thin and tugged in multiple directions. But we’ve heard that the Capitol press corps was actually rather snotty to representatives of pro-choice groups who asked them to cover the event, declaring that abortion bills destined to die in the House were undeserving of their time.

That’s just wrong. Colorado is never more than one election away from going backwards on reproductive rights, and given what is passing into law in other states, these rights cannot be taken for granted in Colorado. In 2014, the local press became openly hostile toward abortion rights activists who insisted that Cory Gardner was deceiving Colorado voters when he “backed off” his support for the Personhood abortion bans.

And then Gardner spent the next three years making them eat their words.

The only thing we have to add to this story is this: the political press in Colorado should consider asking itself why bills that would have such a devastating effect on women are unworthy of coverage when so many other bills destined to die in Colorado’s split legislature do get covered. When we think about this in the context of separate but related issues, like the sexual harassment scandal in the General Assembly that stayed so quiet for so long…

Well, suffice to say we can see a connection.