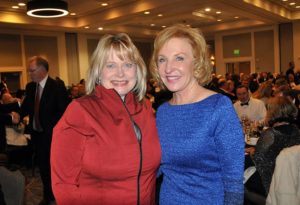 Colorado Attorney General Cynthia Coffman is up for re-election in 2018, but she is apparently taking a hard look at running for Governor instead. We hear that Coffman has been meeting with consultants about a potential run for the state’s top job, where she would join a Republican field already likely to include State Treasurer Walker Stapleton and Arapahoe County District Attorney George Brauchler.

After she was first elected in 2014, Coffman was briefly considered something of a rising star in the Colorado Republican Party. That spotlight dimmed considerably, however, when she inexplicably emerged at the center of a weird blackmail scandal aimed at trying to unseat State GOP Chairman Steve House not long after House was elected to oversee the State Republican Party (Coffman had endorsed House for the role just a few months earlier). The Coffmangate Scandal has never really been resolved, though Coffman is on the record with the media trying to explain why her actions did not constitute blackmail.

When House announced early last week that he would not seek re-election as State GOP Chair, it cleared up a significant hurdle that would have made a gubernatorial run much more awkward for everyone involved. From what we hear, Coffman is not particularly happy with her job as Attorney General and wouldn’t need much convincing to abandon a run for re-election.

We’re still skeptical that Coffman would be able to put together a strong team around her in a potential Gubernatorial bid (would you want to work for someone with such a penchant for tossing people under the bus?), but her recent rhetoric does seem to indicate that she could be testing the waters for a big jump in 2018. Coffman looks to be trying to channel the support of Donald Trump backers as she positions herself for a potential primary battle. As Ernest Luning wrote for the Colorado Statesman on Jan. 23:

Attorney General Cynthia Coffman told the crowd that she had noticed something different starting on the night of Nov. 8, when Trump defeated Democratic nominee Hillary Clinton to win the presidency.

“I realized I was taking deep breaths, in and out, for the first time in two years,” she said. “For me, in my two years as attorney general, I think I have been holding my breath, waiting for the next over-reach from Washington, D.C., the next horrible Supreme Court decision that does not understand or appreciate the 10th Amendment, and suddenly I could take a deep breath and not worry nearly so much about the state of our country or our beautiful Colorado.”

Cynthia Coffman was not exactly a vocal Trump supporter before the election, but she seemed to sense the rising tide on Election Night at a victory celebration for her husband, Rep. Mike Coffman (R-Aurora) when she put a fist in the air and yelled, “Go Trump!” (jump ahead to :30 in the video below).

Cynthia Coffman may be trying to be the “Trump candidate” for Governor in 2018. That might not be such a great idea 18 months from now.