Last Friday’s overwhelming vote by the Colorado Republican Party executive committee to support embattled chairman Steve House was, depending on how you look at it, the worst development yet in a two-week nightmare of boomeranging disaster for Colorado Attorney General Cynthia Coffman. Now that the coup attempt against House has failed to a complete extent even we could not have predicted, both sides of the dispute are trying their best to publicly make nice with one another. In news reports this weekend, House has shifted his description of the events that led to the crisis to a “family dispute”–which sounds somewhat less newsworthy than “attempted blackmail.” Likewise, Attorney General Coffman meekly wished House success in 2016 after the GOP executive committee voted to summarily reject her case for his firing.

Unfortunately for Attorney General Coffman, she made the mistake of granting another interview to 9NEWS’ Brandon Rittiman on Friday night, after blowing off Rittiman earlier in the week in favor of friendlier interviews with the Denver Post and CBS4’s Shaun Boyd. And Rittiman, true to his well-earned reputation for asking the hard questions without fear or favor, didn’t let Coffman off the hook:

[Coffman] says that the first same of a woman who now claims to be House’s mistress was mentioned after the group listed its concerns with House in the role at the head of the state party.

After being asked by 9NEWS political reporter Brandon Rittiman to explain to the public why that shouldn’t be perceived as political blackmail, [Pols emphasis] Coffman gave her thinking for dropping the woman’s name in conversation. 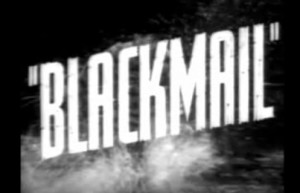 It’s not a new concept.

As we’ve noted previously, Colorado law on criminal extortion is not ambiguous, and clearly specifies that making “a substantial threat” to “cause economic hardship or bodily injury to, or damage the property or reputation of” another person to induce them to “perform an act” “against their will” is a class 4 felony. Nothing that came out during Friday’s hearing of the GOP executive committee mitigates the severity of these allegations–not the possibility that the rumors of an extramarital affair by House were true, nor anything else Coffman invoked to justify her attempt to force House to resign.

And no matter how much Steve House, Cynthia Coffman, or anybody else involved in this story would like for it to go away, it’s not going to. The possibility of a felony crime committed or abetted by Colorado’s chief law enforcement officer is much too serious to be quashed by a vote of a state political party’s committee. As of Friday, trusted sources continued to assure us that the U.S. Attorney’s office “has the case.” Experts with prosecutorial experience tell us it’s routine, even expected, that a prosecuting attorney’s office will not confirm any disposition of a case referred to it until a decision to formally investigate has been reached. Until we hear the definitive answer to that question, we aren’t declaring Coffman or anyone else in the clear criminally.

Even in the absence of criminal prosecution for this case of alleged blackmail, it’s worth reflecting today on the enormous damage done to the Colorado Republican Party in the last two weeks by this scandal. A party chairman only in his job for a matter of weeks was the subject of a sustained, determined character assassination attempt, led by the Republican Party’s biggest vote-getter in 2014. After ousting the previous chairman Ryan Call, who had alienated many grassroots conservatives over his occasional outbreaks of sanity and human decency, the Colorado Republican Party has descended into total backstabbing chaos. To the low information rank-and-file, this infighting is absolutely devastating to morale. Depending on which side of the divide major GOP donors found themselves, wallets are almost certain to close for the 2016 election cycle.

Politically, either in the near or long term it’s a career-ending disaster for Cynthia Coffman. Her judgment in the aftermath of this self-inflicted wound simply can’t be trusted–by political allies, or the voters who would ultimately elect her to something else. There’s a well-grounded argument to be made that after this incident, Coffman has no moral authority to continue to serve as Colorado’s attorney general.

Any way you stack what just happened here, it wasn’t worth the damage.