Ernest Luning of the Colorado Springs Gazette’s political blog took a long-form look at the aftermath of the Colorado Republican Party’s calamitous 2022 midterm elections, as the party’s right-wing base demands heads roll for not supporting “America First candidates,” and the party’s funders and strategists who got exactly the candidates they wanted try to get their collective heads around why it didn’t work a third consecutive time.

The general consensus is that the worst-performing statewide Republican candidate on the ballot in Colorado this year, gubernatorial loser Heidi Ganahl, dragged the entire Republican ticket downward by several crucial points that made the difference in downballot races. This is notable since the Republican U.S. Senate primary featured a number of candidates with some institutional support who unwisely chose the caucus path to the ballot, but Ganahl faced only perennial weirdo Greg Lopez in the June 28th primary after edging out upstart challenger Danielle Neuschwanger.

Although Ganahl tried to glom onto the false post-primary spin that “moderates” had prevailed, it was clear from the outset that Ganahl was making no attempt to actually change course from her message to GOP primary voters that she was “the MAGA candidate Colorado has been waiting for.”

While nearly all the Republicans’ statewide nominees rejected election deniers — secretary of state nominee Pam Anderson, who beat Peters in the primary, largely based her campaign on her contention that Colorado’s elections are safe and secure — this year’s top-ticket GOP candidate bookended her candidacy by casting doubt on the integrity of elections, and voters rewarded her with a landslide loss.

It’s been 32 years since a GOP gubernatorial nominee has lost by as wide a margin in Colorado as Ganahl, who lost to Gov. Jared Polis by 19 percentage points in final, unofficial results.

The last Republican to perform as poorly as Ganahl in a governor’s race was John Andrews, the former state Senate president who lost his 1990 bid to deny Democrat Roy Romer a second term by 26 percentage points. 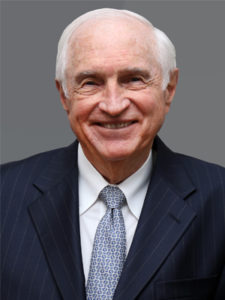 Chairman of the Board of the Common Sense Institute, Earl L. Wright.

The consequences of Ganahl’s failure to change course became evident in the polls through the summer and fall that showed Ganahl consistently not just losing by double digits, but substantially underperforming the other Republican at the top of the statewide ballot U.S. Senate candidate Joe O’Dea who went on to lose by several points less. Ganahl’s choice of election denier Danny Moore as her running mate underscored what was either a massive blind spot or a deliberate choice to embrace the election denial wing of the party–even as Ganahl’s campaign pretended unconvincingly that Moore was no longer an election denier.

Which brings us to the question: if Republican strategists knew they had to run to the center in order to compete, which was the strategy with O’Dea, how did Ganahl make it through the Colorado Republican Party’s nomination process with so much less competition than O’Dea? The answer is partly in Ganahl’s status as the last remaining statewide elected Republican in office. But as Erik Maulbetsch at the Colorado Times Recorder reported over the Thanksgiving holiday, there’s a more fundamental problem.

The rot goes right to the top:

Upon receiving Wright’s email asking “Are you aware of any relevance in this?”, Eastman replied that the wild conspiracy theory had “huge relevance” and suggested they discuss it further…

The so-called Common Sense Institute, which grew out of former state Sen. Josh Penry’s political consulting business, is the Colorado GOP’s premiere establishment “stink tank” created to churn out conservative talking points on state-level issues. CSI was created in part due to a perception that the state’s traditional conservative institutions like the Independence Institute were too beholden to the radical right, in hope of keeping conservatives on messages that voters would be more receptive to like auto theft and fentanyl than election conspiracy theories and “furries” taking over public schools.

The problem appears to be that far too many Colorado Republicans, even among the party’s most influential, had the same “blind spot” as Heidi Ganahl. Ganahl dragged the entire Republican ticket downward and refused to change course even after the damage was obvious–and the best reason we can come up with as to why Republican powerbrokers didn’t see it coming is they are just as radicalized as Ganahl is.

This is a conversation the strategists don’t want to have with the party elite.

Holding up a mirror when they demand to know who’s responsible for another crushing loss.