John Kellner Still Waiting on RAGA, Warts and All

One of these candidates for Attorney General is raising lots of money and support in 2022. The other candidate is John Kellner.

The Republican Attorneys General Association (RAGA) held its “Summer National Meeting” over the weekend at the Broadmoor in Colorado Springs. The event promised some “exciting conversations” on issues such as “inflation, litigation trends, and a Supreme Court roundup” that was surely edge-of-your seat entertainment, but the real action was at the various candidate fundraisers that took place on Sunday evening.

Colorado Republican John Kellner was among the 2022 candidates for Attorney General who held a fundraising event at the RAGAthon on Sunday. Whatever money Kellner raised will no doubt help his bottom line, but he has a long way to go to catch incumbent Democratic AG Phil Weiser in the fundraising department. As of the end of the last fundraising period on July 31, Weiser had raised about 25 times more money than the current District Attorney in JD-18 ($3.76 million for Weiser compared to $176,000 for Kellner).

Kellner was — and probably still is — hoping that RAGA will come to his aid this fall as it did for his predecessor and former boss. In the 2018 cycle, RAGA spent more than $5 million in Colorado in a fruitless effort to prop up Republican George Brauchler — then the DA in JD-18 — in his own race for Attorney General (Brauchler ended up losing by 6 points to Weiser). Kellner is Brauchler’s protégé, so to speak, but he isn’t so far getting the same kind of assistance in his own campaign.

As you can see from the below screenshot via TRACER, the Colorado Secretary of State’s campaign finance information database, RAGA had already been writing big checks by this point in the 2018 campaign. Not only has RAGA kept its money to itself thus far in 2022 — we can’t find any trace of even the existence of a similar committee set up for Kellner. 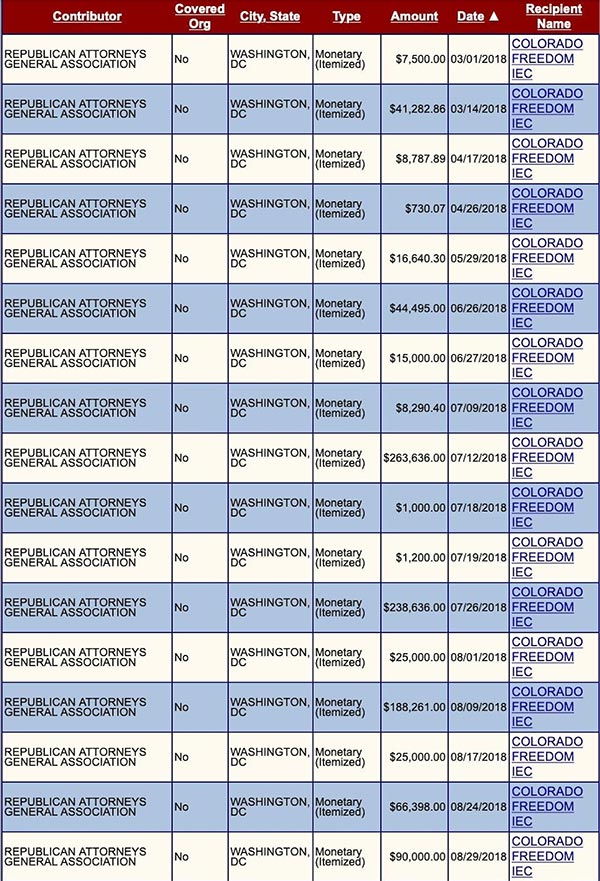 In 2018, RAGA ran its Colorado expenditures through a committee called “Colorado Freedom IEC.”

It’s possible that RAGA has not been impressed by Kellner, who almost lost top-line on the ballot at the State GOP Assembly to a guy who just raised his hand out of nowhere and has since made one MASSIVE mistake that could on its own cost him a chance to defeat Weiser. It’s also possible that RAGA is not all that enthusiastic about going to bat for a clone of the man we like to refer to as “The Magnificent Putz” (let’s just say we wouldn’t take political advice from a guy who miraculously managed to lose two different statewide races in the same election cycle).

Of course, RAGA also has its own problems. The group that has long been funded by ethical giants the likes of the pharmaceutical industry has been struggling to right its ship following the huge blowback it received after reports emerged after the Jan. 6, 2021 insurrection that RAGA was spending big money trying to help drive turnout to the events associated with former President Trump’s coup attempt.

In September 2020, a dark-money group called the Rule of Law Defense Fund convened a meeting in Atlanta of staffers from the fund’s corporate sibling, the Republican Attorneys General Association (RAGA). Their purpose was to run “war games,” to be ready in the event Donald Trump lost reelection in November. A little over three months later, the same group would help to assemble the mob before the White House on Jan. 6, 2021…

… The Rule of Law Defense Fund — the same group convened in Atlanta months earlier — made robocalls hours before Jan. 6 urging followers to “march to the Capitol building and call on Congress to stop the steal.” President Trump whipped up insurrectionists at the rally and sent them down Pennsylvania Avenue to the Capitol. Violence ensued.

In the aftermath, many of these actors were quick to close ranks. RAGA’s leader, Alabama Attorney General Steve Marshall, claims to have had no knowledge of the robocall, but he also refuses — to this day — to admit that Joe Biden is the “duly elected and lawfully serving” president of the United States. At the end of the Trump administration, Clark landed a job at a right-wing dark money group. 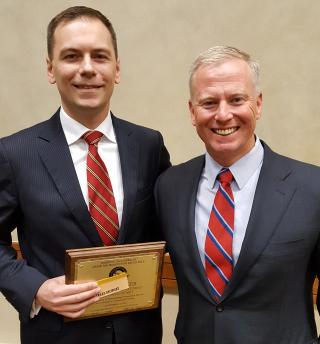 Any financial help that Kellner gets from RAGA will come with plenty of insurrection questions that won’t be fun to answer.

Kellner would probably also prefer to avoid more questions about abortion rights, an issue that has galvanized fundraising for Democratic AG candidates in light of the fact that RAGA largely opposes abortion rights; when asked earlier this month if he supported a woman’s right to choose, Kellner stammered, “I don’t think I can give you a bumper sticker answer on this,” which is just a really long-winded way of answering, “No.”

If Kellner is going to have any hope of defeating Weiser in November, he’ll likely need a massive influx of resources from RAGA. Considering what RAGA had already committed to Colorado at this point in 2018, Kellner can’t be feeling too optimistic about a repeat in 2022.

We’re about six weeks away from ballots dropping in mailboxes all across Colorado. If some other group is planning on parachuting to Kellner’s defense, they had better land here soon.