Mr. Brauchler’s Lie: “I was not the primary defense attorney for Koontz”

Court Documents: Public court documents reveal that in fact, Mr. Brauchler was the only defense attorney to submit a formal“entry of appearance” to the Court in this case, and that his printed name and Colorado bar number appear as listed defense counsel on every single document the defense filed.

Mr. Brauchler’s Lie: “I was filling in for other lawyers”

Mr. Brauchler’s Lie: “This is a case where I went to court one time for this guy”

Court documents: Lawyers for Mr. Koontz’s appeared before the Court eight times in this case, either in person or telephonically. In seven of these eight appearances, Mr. Brauchler was the sole attending defense attorney.

We wrote last Friday about the latest exchange of fire between Republican attorney general candidate George Brauchler and his Democratic opponent Phil Weiser over their respective work as private lawyers on criminal defense matters. An ad from Brauchler’s principal backers at the Republican Attorneys General Association attempts to vilify Weiser for a pro bono legal opinion he submitted upon request in a criminal case, using the lurid details of the underlying case to somehow impugn Weiser’s own moral credibility. The claim is patently ridiculous since Weiser’s only role in the case was a legal opinion on a specific detail, not as a defense attorney–not to mention that attorneys by nature are in the business of defending bad people, and that does not make them bad people themselves.

Worse, as we discussed Friday, is the straightforward charge of hypocrisy this attack opens against Brauchler, whose own record as a criminal defense attorney is full of cases that could be weaponized in the same duplicitous manner. In particular, Brauchler was the defense attorney in a disturbing case of alleged sexual assault at Colorado State University which ended in a controversial plea bargain for the accused rapist.

And that’s where the Colorado Sun’s Jesse Paul picks up the story, discussing the response ad from Weiser that invokes this case:

One of Brauchler’s defendants cited by the ad is William Allen Koontz. In 2009, when he was a student at Colorado State University in Fort Collins, Koontz was accused of sexually assaulting a woman who told investigators she believed she had been drugged…

But Brauchler says the ad dramatically overstates his role in the case. He says he was filling in for other lawyers in his firm and that he was not the primary defense attorney for Koontz.

“This is a case where I went to court one time for this guy on behalf of a law firm,” Brauchler said. “… I don’t even remember the facts of that case, that’s how little I had to do with it.”

The problem is, court filings don’t support Brauchler’s contention that he was just another counsel in an office that happened to handle the case: 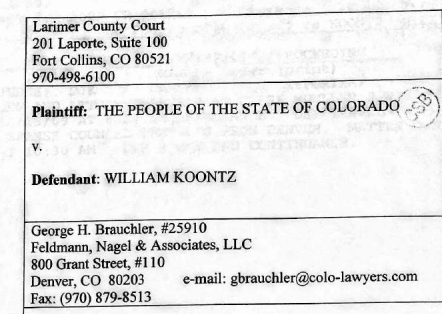 Whatever the details of Brauchler’s involvement, there’s simply no question that Brauchler was much more intimately involved with this controversial rape case than Weiser was with his written opinion about one aspect of law in another case. The hypocrisy of this is completely indefensible, and Brauchler’s denials contrary to the available record do not help. Neither does this:

It’s worth noting that by law Brauchler and RAGA can’t coordinate with each other, and that RAGA is behind the Weiser attack ad, not Brauchler.

“I have never made an issue of a single client that Phil has chosen to represent,” Brauchler told The Sun in an interview last week. “I am not concerning myself with the third party ads of either side.”

We understand that it’s courteous to maintain the mostly fictional separation (see: Stapleton, Walker) between a candidate’s own campaign and the “independent expenditure” efforts on that candidate’s behalf. When it comes to Brauchler’s association with the Republican Attorneys General Association (RAGA), the pretense is harder to maintain given RAGA’s lopsided spending on behalf of Brauchler, accounting for the vast majority of the total campaign effort. If you exclude RAGA from Brauchler’s campaign, on every practical level he doesn’t have a campaign.

In summary, for every voter keeping score, the hypocrisy of this late attack on Weiser is compounded by Brauchler’s implausible denials regarding the CSU sexual assault case for which he is listed in at least some court filings as the principal defense attorney (see image above). In this situation, it would be a simple and smart move for Brauchler to make a strong statement condemning the baseless attacks on Weiser, if only to negate the considerably more factual countercharge against Brauchler.

Not likely, though. Because the “third party” carrying Brauchler over the finish line has spent a lot of money on their attack ad. And however much or little he may “coordinate” with his de facto campaign organization, Brauchler knows that much.