Former Republican District Attorney George Brauchler has repeatedly earned the title of “The Magnificent Putz” here at Colorado Pols for his almost superhuman ability to make stupid mistakes, offensive statements, and ridiculous arguments — either in politics or in legal matters.

Brauchler is no longer in elected office (thankfully), nor is he a candidate for something else. But nothing can stop Brauchler from pressing the ‘stupid’ button in public.

In today’s “The Unaffiliated” newsletter from The Colorado Sun, Brauchler attempts to re-write history regarding his own electoral failures. It’s quite a treat. The basis of the story in the “Unaffiliated” is that Colorado Republicans seem intent on continuing a failed 2018 approach of attacking Democratic Attorney General Phil Weiser because he hasn’t stood in front of a judge enough:

When Republican George Brauchler ran for attorney general (after running for governor) in 2018, he and his GOP allies repeatedly used a label to try to define his Democratic opponent, Phil Weiser: “the professor.”

The idea behind the label was to paint Weiser, a former dean of the University of Colorado Law School, as an academic with little courtroom experience. At the time, Brauchler was the 18th Judicial District attorney and not too far removed from prosecuting the Aurora theater shooter. Brauchler also criticized Weiser for not having much criminal law experience, even though the Colorado Attorney General’s Office rarely works on criminal cases.

As the Sun points out, even though this didn’t work, Republicans such as GOP Chair Kristi Burton Brown are continuing the same line of attack. Here’s where the story gets hilarious:

Brauchler says he doesn’t think his 2018 loss had anything to do with how he ran his campaign. [Pols emphasis]

We’re going to stop here so that readers can fully appreciate this sentence all by itself.

If you are done laughing, let’s continue:

He argues it was more about the political mood across the U.S. and in Colorado, which favored Democrats.

“I don’t know that you can call it a losing message,” he said. “I think the failure to get elected in 2018 had really very little to do with Phil or me or whether he was qualified at all. If Joe Salzar had pulled off the primary, he would be the attorney general.”

Brauchler predicts that the political wave that he thinks prevented him from winning four years ago will sweep Weiser out of office in 2022. But he also thinks Republicans shouldn’t rely too much on the professor messaging again this time around. [Pols emphasis] 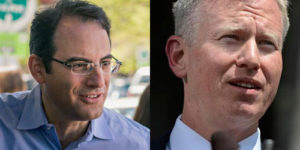 Brauchler says that it isn’t his fault he lost in 2018, adding “I don’t know that you can call it a losing message.” A little later, Brauchler says that Republicans in 2022 shouldn’t spend much time using his 2018 message…because it didn’t work. That’s some galaxy brain logic right there.

Brauchler is correct that 2018 was a great year for Democrats in Colorado, but that’s not why he essentially lost two different statewide campaigns in the same election cycle (Brauchler had a pitiful six month run as a candidate for Governor before switching to the Attorney General race). The truth is that being a bad candidate with a bad message is a losing recipe in any election.

George Brauchler lost the Attorney General race to Phil Weiser in the 2018 General Election by seven points (52-45), but apparently that wasn’t Brauchler’s fault.

It never is, except when it is.