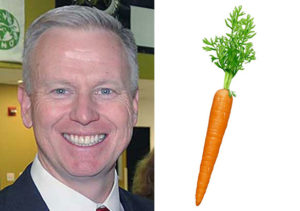 George Brauchler and his political strategist.

George Brauchler has the political instincts of a carrot.

Last month, the Arapahoe County District Attorney and Republican candidate for Attorney General made the bizarre decision to publicly attack a potential witness in an execution case after a woman refused to participate in the trial due to her religious beliefs. Brauchler was so caught up in his bloodlust over death penalty cases that he was oblivious to the fact that the entire episode just made him look like a Republican opposing religious freedom.

Yesterday, Brauchler decided he needed to speak out against Colorado teachers who are marching on the State Capitol this week over concerns about poor education funding and some of the lowest wages for teachers in the entire country. It did not go well:

Horrible optics at a time when most parents, like me, see our kids’ great #teachers as deserving of better pay, b/c they put kids’ education first. This decision is selfish. They could’ve protested on an in-service day. Instead, they inconvenienced #parents. #Mistake @dcsdk12 https://t.co/Oi9ILKryg1

Brauchler was quickly attacked on social media for his idiotic Tweet — a problem he then compounded by getting into heated discussions with people responding to his message. It is particularly absurd for Brauchler to question the timing of teacher complaints about low wages; after all, this is the same guy who used to talk about how he once asked for a pay cut without bothering to mention that he had later requested — and received — a huge salary increase.

We can’t understand Brauchler’s thought process here, because this is fundamentally a very simple thing: If you are trying to win a statewide race for any office, attacking teachers is about the last thing you want to do. Ever.

Brauchler was once thought to be a potential candidate for U.S. Senate, but he skipped that opportunity in order to make a run for Governor in 2018. Brauchler’s gubernatorial hopes fizzled out in a matter of months after it became clear that he had absolutely no idea how to mount an effective statewide campaign; when Attorney General Cynthia Coffman announced her own no-hope bid for Governor in November, Brauchler quickly changed trains to run for AG himself.

In his brief run for Governor, Brauchler showed that he couldn’t raise money and had no grasp of how to talk about issues (Brauchler was famously surprised to find out that water was a big issue in Colorado). While he has been running for various statewide offices, Brauchler has also proven to be pretty terrible at his current gig, which doesn’t help his argument that he should become Colorado’s chief law enforcement officer.

Some politicians just can’t ever seem to get out of their own way. George Brauchler is exactly that kind of politician.