Brauchler Surprised that “Water is a Huge Issue” in Colorado 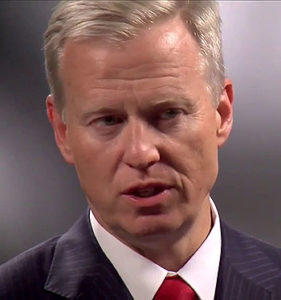 So, tell me more about this…water.

Many of the 17 dozen candidates for Governor in Colorado descended on the annual “Club 20 Fall Conference” in Grand Junction over the weekend. Candidates from the Front Range may not be exposed to all of the issues that are critical to Colorado’s Western Slope, but Republican gubernatorial candidate George Brauchler was a bit too candid in his comments. As the Grand Junction Daily Sentinel reports:

As the current district attorney for the 18th Judicial District in the Denver metropolitan area, the Republican knows much about public safety issues, from the courts to law enforcement.

But being governor necessitates more than just a rudimentary understanding of other issues, something he’s learned while campaigning on the Western Slope in the crowded race for the GOP nomination for governor.

“The one issue that I did not anticipate, but appreciate more than any of the other (issues), is water,” Brauchler said Friday shortly after meeting with the Grand Junction Economic Partnership about business issues. “On the Front Range, the water issue is when I turn on my tap, is it there? Getting around the state as much as I have over the past five months, water is a huge issue.” Brauchler said his lack of understanding about water issues prompted him to meet with numerous water experts, including those with the Colorado River District. [Pols emphasis]

His main takeaway, which is still under development, is more storage and more conservation.

It’s hard to overstate the weirdness of Brauchler’s comments here. Water policy has been among the most important issues in Colorado since…well, since before Colorado became Colorado. We have a Statewide Water Plan in Colorado, for crying out loud. Water policy in Colorado is extremely complicated, as this briefing document from the State of Colorado outlines, so candidates can be forgiven for not knowing all of the details. But not knowing that water is a big issue in general is a flabbergasting acknowledgment from a serious gubernatorial candidate.

This bizarre admission is a terrible look for Brauchler — and no doubt something that will haunt him in the months to come. It is an inexcusable mistake that Brauchler was not better-briefed before he grabbed the microphone in Grand Junction.