As Republican U.S. Senate candidate Joe O’Dea hits the campaign trail, his flight to the center to compete in this leftward-trending state continues to run up against the hard reality of a Republican Party that thwarts O’Dea’s Cory Gardner-style trickery. Last week, O’Dea fumbled an attempt to put daylight between himself and former President Donald Trump by saying he “hopes” Trump doesn’t run again, only to meekly about-face by the end of the day and assure the angry party faithful that he would vote for Trump as the nominee in 2024.

The very next day, O’Dea met up with a Republican poster child for immoderation out in Logan County: 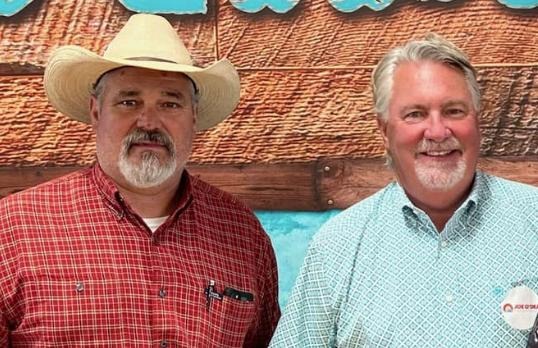 Sharp-eyed readers will recognize the man on the left as Rep. Richard Holtorf of Akron, who since taking office in 2019 has become one of the more unsightly boat anchors of the far-right wing of the Republican House Minority. In the 2021 legislative session, Holtorf joined forces with O’Dea’s primary opponent Rep. Ron Hanks in a failed performative obstruction campaign, which still stands as one of Holforf’s biggest legislative “accomplishments.” But what Holtorf is really famous for is nationwide bad press for just plain being a horrible person–calling a colleague of color “Buckwheat” on the House floor, and telling the father of a victim of the Aurora theater shooting “you have to let go.” This past March, Holtorf’s concealed pistol fell out of his pocket inside the Colorado Capitol while shuffling up a set of stairs, prompting another debate about why lawmakers are allowed to carry guns in a building where no one else is.

In 2020, Rep. Holtorf co-sponsored legislation to ban abortion after 22 weeks of pregnancy. This bill was quickly swatted down by the Democratic-controlled House, but if Republicans were to win the legislature and governor’s office in a “red wave” worst-case scenario this November, it’s well within the parameters of what pro-life Heidi Ganahl has said she would sign.

And that’s just the tip of the iceberg. Holtorf has sponsored legislation to disrupt vaccination campaigns and reduce the state’s already abysmal vaccination rate even further. Last year, Holtorf’s big idea was “election integrity”–new redundant audits in an attempt to satisfy baseless (and therefore unstoppable) concerns about basically nonexistent fraud. In the end, it’s a real debate whether Holtorf’s deplorable antics or even worse actual policies are the biggest problem.

Holtorf, who was present for Tuesday’s GOP ill-advised “unity rally,” has a well-earned reputation for stinking up the Colorado House Republican minority. On the campaign trail with Republicans who need to project the opposite of Holtorf’s controversial image if they want to win, Holtorf does collateral harm well beyond his own safe House seat.

There aren’t enough voters in Logan County to compensate for the damage hanging with a guy like Holtorf does elsewhere.