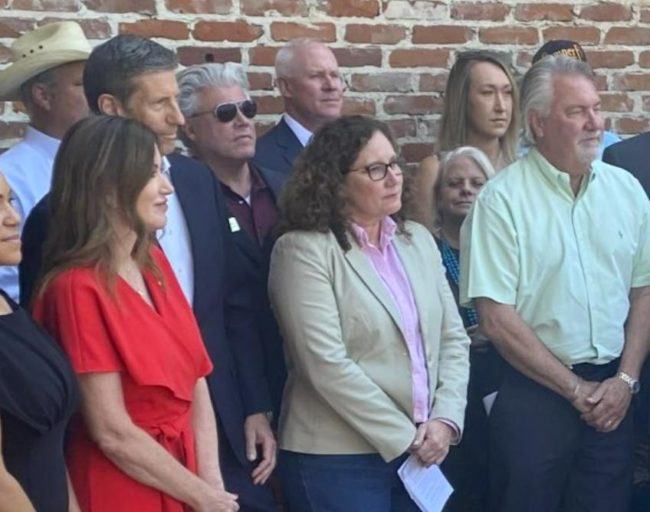 As Colorado Newsline’s Sara Wilson reports, yesterday most of the upper slate of Colorado Republican candidates up for election this November came together for a rally to showcase their united front going into the 2022 midterm elections–a redux of the original much-maligned “Commitment to Colorado” rally one year ago organized by Colorado Republican Party chair Kristi Burton Brown at a Denver gas station.

From “KBB’s” point of view as party chair, this “unity rally” was useful, even necessary. But for several Republican candidates whose best shot at winning in blue-ish Colorado is differentiating themselves from the party’s tarnished brand, it was a major strategic mistake:

Republicans were marking one year since they unveiled their “Commitment to Colorado” legislative package of over 40 bills they said prioritized affordability, safety and expanded educational choice. Five of those bills passed the Legislature…

Mostly, however, the press conference was an opportunity for Republican candidates to offer their stump speeches and present a unified front that toes the party line, following a bumpy summer that saw failed Republican candidates push false claims of primary election fraud. [Pols emphasis]

“I’m proud to stand up and support every candidate here today as the professionals, entrepreneurs and problem solvers that will bring their background and experience to the table to address the most challenging issues that Colorado faces today,” secretary of state candidate Pam Anderson said… 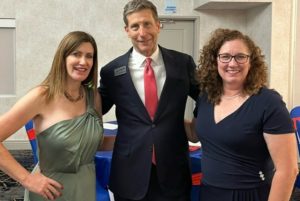 Less than two weeks ago, GOP Colorado Secretary of State candidate Pam Anderson released a statement condemning Heidi Ganahl’s campaign for governor after the selection of election denier Danny Moore as Ganahl’s running mate. There was no reason to doubt Anderson until yesterday, when she took the stage with Ganahl and local election denialist attorney Randy Corporon (image top right) to “support every candidate here today.” How can Anderson possibly explain this contradiction?

Answer: she can’t. Pam Anderson has simply decided that her values are not worth making waves on the Republican ticket. If Anderson wanted to convince wary Colorado voters that the (R) after her name does not mean she will accommodate future Republican attempts to overturn elections they don’t win, she needed to stay far away from this whole crowd–especially now that Ganahl’s campaign is tainted by persistent election denial. For Pam Anderson, “unity” with the rest of the Republican ticket wrecks her entire message.

Anderson wasn’t the only candidate on stage yesterday with little to gain and lots to lose from Colorado Republican “party unity”–Joe O’Dea, who is trying mightily to project a Cory Gardner-style “different kind of Republican” image of his own, is the owner of the Mile High Station events venue where yesterday’s event was located:

U.S. Senate candidate Joe O’Dea used his time to criticize the major climate, health and tax bill Democrats in the Senate passed over the weekend. He called the legislation, which Vice President Kamala Harris cast the tie-breaking vote for, a tax that “goes against everything we believe here in Colorado.” He did not mention the climate change and clean energy provisions in the bill.

After hiding for months behind the obstruction of Pretendocratic Sen. Joe Manchin of West Virginia, the recent outbreak of progress in Washington, D.C. has put Joe O’Dea in the unwelcome position of being forced to trash-talk overwhelmingly popular legislation. Joe O’Dea’s flight from hot-button Republican issues like abortion and marriage equality gives him little to work with in terms of differentiating himself from his moderate incumbent opponent, but the remaining option of disparaging legislation supported by 73% of the public and even 52% of Republicans is not great either.

In both of these cases, we’re talking about completely self-inflicted embarrassment. For candidates triangulating off their own party’s brand like O’Dea and Anderson, a “party unity” rally is almost perfectly counterproductive. It’s true that the chair of the party is going to be naturally reluctant to accept this reality.

That’s why candidates need to think for themselves.

Too late this election, better luck next time.