Just Another Republican Dumbass Lawmaker And His Gun

UPDATE: 9NEWS’ Marshall Zelinger reports that Rep. Richard Holtorf might not squeak out of his Capitol gun fumbling as easily as previous elected offenders:

Quick update on the gun that dropped from State Rep. Richard Holtorf yesterday.

CSP is working with DPD on possible criminal charges. I have asked both CSP (which patrols inside Capitol) and DPD (which handles outside the Capitol) what possible charges. #copolitics

A crackdown on this ridiculousness before someone gets hurt would be a welcome development. 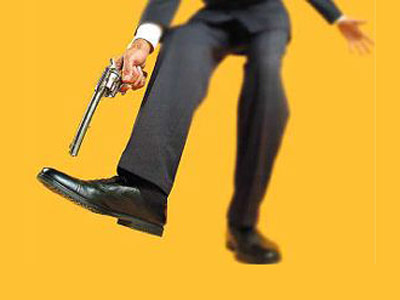 According to three witnesses, Republican state Rep. Richard Holtorf was hurrying up a short set of steps outside the House chamber when his handgun fell out of his pants onto the marble floor. The witnesses said Holtorf quickly picked it up and proceeded to enter the chamber…

Holtorf and Republican House leaders did not immediately return a request for comment. The witnesses told CPR News the incident was “reckless and scary.” They asked to remain anonymous for fear that going public would jeopardize their work with Republican lawmakers.

“This incident was unacceptable and created a dangerous situation for lawmakers, staff, and the public visiting the capitol,” said Democratic House Speaker Alec Garnett in a written response to the incident. “We are looking at existing laws and rules and what options might exist that would prevent this from happening again.”

FOX 31 got comment on the incident from Rep. Tom Sullivan, one of the state’s leading gun control activists after his son was murdered in the July 2012 Aurora theater shooting:

“These are people that profess to be law-abiding, responsible gun owners and to have something like that happen appears to me to be an irresponsible act,” Sullivan said.

As our more seasoned readers know, a long-established loophole in the law allows elected Colorado lawmakers to bring concealed guns into the Capitol despite members of the public being required to pass through metal detectors, and not even legally-carried concealed weapons are otherwise permitted. As recently as 2013 this policy was disputed by former Senate President John Morse, but his recall that year appears to have settled the question. In any event, the policy has manifested itself…uncomfortably a few ways over the years, in addition to lawmakers just fumbling or leaving guns lying around as most famously occurred in 2014 when ex-Rep. Jared Wright left a loaded gun unattended in a committee hearing room.

During the 2013 debate in the legislature over gun control laws, Republican lawmakers openly intimidated witnesses by invoking the presence of their concealed guns in that very room. During the 2018 battle over rampant sexual harassment by lawmakers that led to the expulsion of Steve Lebsock, some lawmakers testified how they were wearing body armor in fear of retaliation from inside the building. Speaking to Colorado Public Radio about Holtorf’s incident, former Rep. Jonathan Singer summed up the problem this way:

“When you enter a government building where there are heated vigorous debates and people are on edge, and sleep-deprived and — let’s be honest — there are people in this building who are drinking, that can be a deadly mix,” [Pols emphasis] said former Democratic state Rep. Jonathan Singer, who found [Rep. Wright’s] weapon.

Metal detectors and screening the public for guns at the State Capitol building came about after a 2007 incident in which a man calling himself “Emperor of Colorado” brandishing a gun inside the building near the governor’s offices on the first floor was shot and killed by CSP security. Since then, the unusual status quo of lawmakers carrying guns in a building in which no one else can except the police has persisted out of inertia and a lack of will to challenge Republicans on the issue.

Every time another Republican lawmaker with a gun proves to be an idiot, this becomes harder to justify.