Ganahl: Most Colorado Kids Can’t Read, Write, or Do Math 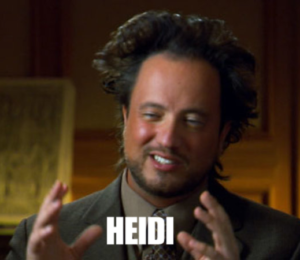 Earlier this year we posted a bracket-style look at the worst major political campaigns in the last two decades in Colorado. The Winningest Loser in our bracket was Republican Bob Beauprez’s disastrous campaign for Governor in 2006, but we noted at the time that 2022 Republican gubernatorial nominee Heidi Ganahl was making a run at the title with her dumpster fire of a campaign.

Indeed, the closer we get to Election Day, the more Ganahl’s campaign seems to be morphing into Beauprez’s 2006 debacle. Here’s yet another example…

In August 2006, Beauprez was forced to make a half-assed apology for making a ridiculous claim about abortion during an interview on Colorado Public Radio’s “Colorado Matters” (in fact, we still have the transcript of that interview in our archives). Beauprez had claimed that more than 70% of African-Americans were getting abortions, a figure that is so ludicrous that it doesn’t even need a complete fact checking:

“I’ve seen numbers as high as 70 percent – maybe even more – in the African-American community that I think is just appalling.”

Beauprez’s apology was not great, but at least he acknowledged his own idiocy: “I was wrong about the statistic I quoted in a recent interview with Colorado Public Radio and I apologize to the African American Community and anyone else who was offended,” said Beauprez in a statement. “I should have verified the statistic before repeating it.” [Pols emphasis]

This is a lesson that Ganahl should have learned. We recently stumbled across this “Mom on a Mission” video from Ganahl’s campaign that tries to use an equally-absurd statistic as fact. You can click on the link above to watch the entire 34-second video, but here’s the key part:

“And 60% of our kids here in this state cannot read, write, or do math. That is not okay.”

Again, we don’t need to spend any time doing serious research to know that this statistic is straight bananas. Ganahl would have you believe that 6 in 10 Colorado children are both illiterate and incapable of solving basic math problems. This is as dumb as saying that 100% of Colorado children under the age of 3 are unable to read, write, or do math…but at least that figure would be accurate.

Ganahl is an elected Regent at the University of Colorado, so she should have at least absorbed SOME information about public education just by osmosis over the last 5-6 years. Of course, this isn’t the only time Ganahl has said something bizarre about public education in Colorado; she also seems to think that we are teaching sex education to kindergarteners, which is silly.

So where did Ganahl come up with this 60% figure? Here’s our guess:

Over the course of her campaign for Governor, Ganahl has regularly mentioned statistics about how Colorado children perform in schools. You can find plenty of numbers showing that X% of kids test below grade level in various subjects, which is a completely fair thing to point out (however, Colorado students generally test better than the national average when it comes to reading). But the details matter. At some point, Ganahl stopped parsing out the numbers for different grade levels and subjects and just lumped it all into one ridiculous percentage.

And that number just keeps rising. By the time we reach November, Ganahl will be saying that 90% of the state’s entire population is illiterate.

Ganahl has long acknowledged that she’ll say pretty much whatever you want her to say if she thinks it might earn your support. Most politicians will exaggerate on various issues to some degree, but this is different — it’s just flat out lying. For the Ganahl campaign, such an approach seems to be standard operating procedure.