We wrote and updated at length on Thursday as yet another stupendous uncontained public relations failure played out in Republican gubernatorial nominee Heidi Ganahl’s campaign. After announcing to multiple radio outlets that she would make her selection for lieutenant governor public Thursday, saying “he’s a great Hispanic leader from rural Colorado,” word of Las Animas County Commissioner Felix Lopex’s selection went around with enough certainty that the Colorado Springs Gazette’s political blog broke the story: 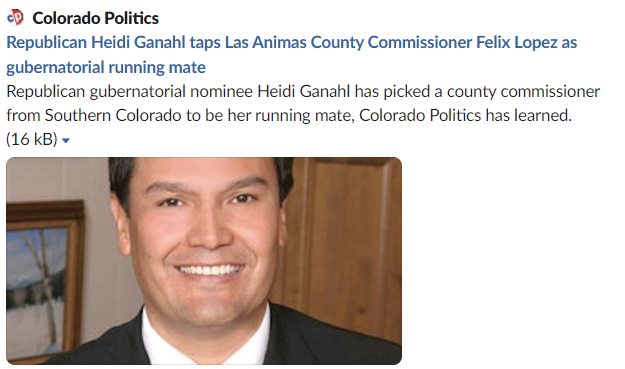 Within an hour, the story was unpublished, and the outlet put out a Tweet saying the report was “in error”–and in the ultimate act of falling on their sword journalistically, apologized to the Ganahl campaign saying “we regret the error.”

But as it turns out, the Gazette reporter responsible for the original story didn’t just make it up. The campaign teased Thursday’s expected announcement for a week, with enough detail to narrow speculation down, and Lopez’s name was in circulation before Thursday’s announcement. It’s our understanding that Lopez had been talking to the Ganahl campaign for days, at the same time Ganahl was teasing the pick on the radio. The only way this turn of events made sense is if Lopez had turned Ganahl down, much like Ganahl herself had turned down Walker Stapleton’s offer to lose on his ticket in 2018. That could, if true, change this from a case of reporter error to a friendly news outlet running cover for a disorganized campaign.

Colorado Politics published on Thursday, and then retracted, a story naming Las Animas County Commissioner Felix Lopez as the pick.

They removed the story saying on Twitter, “Her campaign says Lopez is not her pick.”

The spokeswoman has not answered those questions directly, but said in a text, “That report was not true and has been retracted. Felix Lopez is a strong supporter who will have a pivotal role in our campaign, especially reaching out to rural Colorado and minorities. We pushed back the announcement for the holiday week [Pols emphasis] and will let you know when we are ready to share our choice for LG.”

Kyle Clark’s response to blaming the “holiday week” for pushing back the announcement is for the ages:

The Fourth of July was previously scheduled. [Pols emphasis]

But the best part came when Marshall Zelinger reached Lopez on the phone and tried to get a straight answer to the simple questions:

When [Lopez was] asked if he was asked to be lieutenant governor and did he say yes, his phone started to cut out and the call disconnected.

Two additional phone calls went to voicemail and he has not responded to a follow up text message.

That’s right, folks. Lopez gave 9NEWS the fake bad phone connection! There’s actually an app for convincingly faking bad reception to get out of both cell calls and Zoom meetings. We don’t endorse their use, especially with reporters. And we’re sorry to say that whether or not you use an app to shine people on, they usually know it.

Watch the video below — you can hear Kyle Clark fail to stifle a laugh just after Zelinger says there was a “bad connection”:

Here’s @Marshall9News‘ full report on the Lieutenant Governor rollout that turned into a mess… pic.twitter.com/VTcT2aoZug

So what happens now? It’s tough to say–Ganahl’s campaign appears to have ruled out Felix Lopez in their statement Thursday that prompted the Gazette’s retraction. But in 9NEWS’ report Friday, Lopez seemingly leaves open the possibility he’ll be the pick. Either way, the date Ganahl set for the announcement came and went, and the campaign’s excuse for the postponement is laughable. None of that embarrassment is anyone’s fault but Heidi Ganahl. The poll numbers showing Ganahl losing by double digits to incumbent Gov. Jared Polis have got to be daunting to any potential running mate, and Ganahl might not have given Lopez comforting answers. There was no urgency behind announcing the LG pick, just a date they picked–and obviously, weren’t ready for.

Kudos to 9NEWS for not letting this debacle slip down the memory hole, which is what was about to happen.