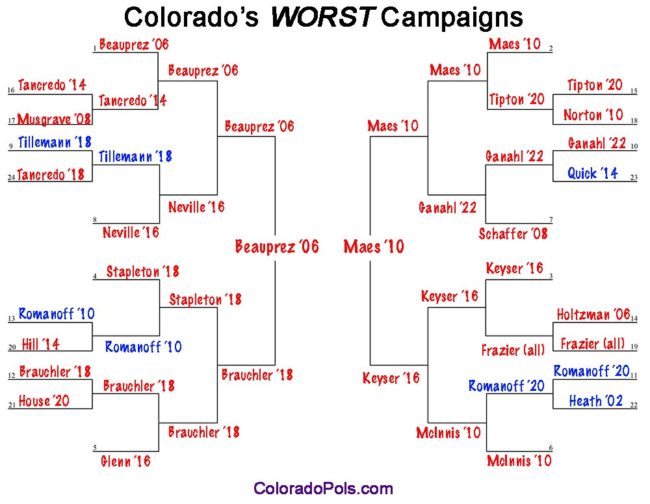 After multiple rounds of discussion, we have at last reached the end of our quest to crown the WORST major campaign in Colorado in this century. According to our completely non-scientific poll of readers, the championship of this crappy tournament came down to two former campaigns for Governor: Bob Beauprez in 2006 and Dan Maes in 2010.

Congratulations, we guess, to Bob Beauprez’s 2006 campaign for Governor of Colorado!

Yes, the 2010 gubernatorial campaign of Dan Maes was so bad that Republicans were almost relegated to “minor party” status in Colorado. You could certainly argue that Maes getting 11% of the vote in 2010 assures him the top spot here. But our goal was to crown the worst major campaign in the last 22 years, and that trophy has to go to the Beauprez operation.

As we detailed in our post on the “Ugly Eight,” Beauprez was a good candidate on paper who seemed to check all of the boxes (name ID, fundraising ability, etc.). Dan Maes, on the other hand, was just some random dude who for a variety of strange reasons ended up as the Republican nominee for Governor. Beauprez would go on to become the GOP nominee for Governor in 2014. Maes would go on to…honestly, we don’t even know if Maes even still lives in Colorado.

The Maes campaign was bad, sure, but it would have been hard to do much with that candidate. Beauprez’s gubernatorial campaign was an outright disaster. The Beauprez campaign is responsible for what is probably the worst candidate TV ad of the last two decades (the infamous “horse’s ass” spot), and no other candidate for major office in Colorado has lost by a larger margin in a General Election (Democrat Bill Ritter beat Beauprez by 17 points).

Beauprez’s 2006 campaign for governor is #1 at #2 for now, but don’t get complacent; 2022 Republican gubernatorial hopeful Heidi Ganahl seems determined to take the title for herself.