UPDATE: Tim Hoover of the Denver paper reports now that GOP House Speaker Frank McNulty is “clearly irritated” at the hubbub over raising legislative per diem pay. That said, McNulty’s not giving what you’d call good answers on how this looks after years of unrecovered cuts, or might appear to state employees who haven’t had a raise in four years.

This looks less and less like a situation that’s going to end well, folks.

Reporter John Schroyer of the Colorado Springs paper does a good job today updating the story, originally broke by the Pueblo Chieftain’s Patrick Malone this weekend, of House Bill 12-1301–which passively implements a 22% increase in the daily per diem rate for legislators who represent districts outside the Denver metro area. This per diem raise was passed some years ago, but its implementation was delayed during the worst of the recent recession-forced budget cutting for, and one source of ours put it, “self-evident political reasons.”

It’s important to recognize that this did not begin as any kind of Democratic setup–HB12-1301 is sponsored by both House and Senate majority and minority leadership. In our discussion of this bill, we’ve tried very hard to distinguish between the very reasonable case for increasing not just legislative per diem but compensation in general, and the debate-free (but as it turns out, not dissent-free) passage of this bill through the Republican majority Colorado House. 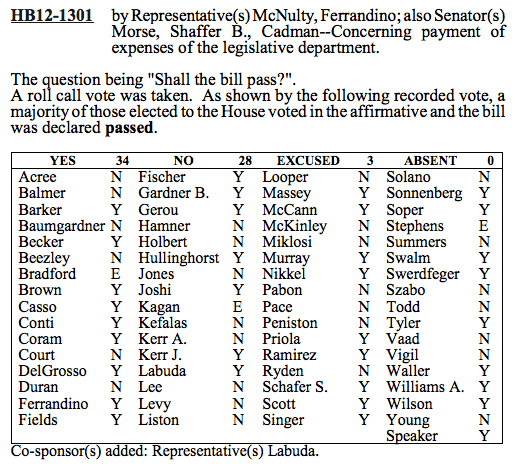 As you can see, the vote to pass the bill was far from unanimous, and this belies the explanation from some proponents that they “did not vote on a pay increase” but a small budgetary matter. Schroyer quotes Rep. Marsha Looper pretty flatly, “I don’t think we should be giving ourselves a raise when unemployment rates are so high.” Even Looper’s primary opponent, Majority Leader Amy Stephens who was away from the chamber last week on family business, says she opposed the bill for this reason when it came before the Legislative Leadership Council.

So what happens now? Well, we’d say the chances of legislation to prevent the per diem hike from going into effect not being introduced dwindle every time a reporter calls for a quote about this bill–meaning it’s pretty much inevitable at this point. Politically, we really do think that Republicans have more to lose if the issue goes toxic, despite the Democratic leadership also sponsoring. For one thing, it passed the GOP-controlled House before it became an issue.

And then there’s the issue of kept-on-the-down-low legislative pay hikes of any kind coming on the heels of years of budget cuts in this state–budget cuts more or less celebrated by the Republican Party. It shouldn’t be hard to understand why this is perilous ground for them: whether explaining their actions to the “Tea Party” hordes, or everybody else.

And we’re sorry, but that’s not Mark Ferrandino’s problem.