Get More Smarter on Thursday (Feb. 3)

Happy Setsubun; it’s not any weirder than asking a groundhog to forecast the weather. Let’s Get More Smarter. If you think we missed something important, please include the link in the comments below (here’s a good example). If you are more of an audio learner, check out The Get More Smarter Podcast. And don’t forget to find us on Facebook and Twitter.

► The leader of ISIS has been killed in Syria after a raid by U.S. forces. As The New York Times reports:

President Biden said on Thursday that the leader of the Islamic State died during a raid by U.S. Special Operations commandos in a risky pre-dawn attack in northwest Syria. Rescue workers said women and children were among at least 13 people killed during the raid.

In brief remarks at the White House, Mr. Biden said the choice to target the ISIS leader, Abu Ibrahim al-Hashimi al-Qurayshi, using the Special Forces was made to minimize civilian casualties, despite the greater risk to American troops.

Speaking in the Roosevelt Room at the White House, Mr. Biden was understated as he described the ISIS leader’s history, saying that he had ordered a series of atrocities, including against the Yazidi people. “Thanks to the bravery of our troops, this horrible terrorist leader is no more.”

He said the operation was a warning to terrorist groups.

“This operation is testament to America’s reach and capability to take out terrorist threats no matter where they try to hide anywhere in the world,” he said.

Biden added that all Americans involved have “returned safely from the operation.”

► Schools in Douglas County are closed today, but not because of the weather. As Jessica Seaman reports for The Denver Post:

…The protest, which includes a rally at 1 p.m. at the district’s administration building in Castle Rock Thursday afternoon, follows allegations made by three members of the district’s Board of Education that other board members are trying to oust Superintendent Corey Wise. The board also recently voted to change the district’s equity policy, which upset employees…

Republicans, including former Attorney General candidate George Brauchler, are losing their damn minds over this and promoting the doxxing of teachers. This led to a plea for civility from Gov. Jared Polis:

Public discussion and debate is healthy and important. But doxxing of elected officials, journalists, and now teachers is always wrong and dangerous https://t.co/Jt46Fm9AZX

Colorado Public Radio has more on the problems in Douglas County under a new conservative-majority school board.

► Democrats in the state legislature are pushing for bills to protect abortion rights amid new right-wing attacks.

► The Washington Post has the latest on concerns over a potential Russian invasion of Ukraine:

U.S. officials say they have evidence that Russia has developed a plan, approved at high levels in Moscow, to create a pretext for invading Ukraine by falsely pinning an attack on Ukrainian forces that could involve alleged casualties not only in eastern Ukraine but also in Russia.

The details of the plan have been declassified by U.S. intelligence and are expected to be revealed Thursday by the Biden administration, said four people familiar with the matter. The administration last month warned that the Russian government had sent operatives into eastern Ukraine, possibly in preparation for sabotage operations.

The alleged operation the United States plans to expose would involve broadcasting images of civilian casualties in eastern Ukraine — and potentially over the border in Russia — to a wide audience to drum up outrage against the Ukrainian government and create a pretext for invasion, two of the people said. It was unclear if the casualties would be real or faked, one U.S. official said.

President Biden on Wednesday ordered the deployment of thousands of U.S. troops to Eastern Europe.

And then there’s Missouri Republican Sen. Josh Hawley, a 2024 Presidential hopeful who is now calling on President Biden to do whatever Russia wants. It would be difficult to be more of a self-serving asshole than Hawley.

► Congressperson Lauren “Q*Bert” Boebert held a tele-townhall meeting on Wednesday that was chronicled by a helpful Twitter account.

► Ernest Luning of the publication formerly known as the Colorado Statesman has the latest on draconian punishment plans within the El Paso Republican Party:

El Paso County Republicans plan to decide whether the local party can censure its members for violating its platforms or getting crosswise with GOP leaders.

The county GOP’s central committee — made up of precinct leaders, party officers and elected officials — is scheduled to weigh a proposed bylaws amendment to establish a formal censure procedure at its meeting on Saturday at Vista Ridge High School in Colorado Springs.

Supporters of the proposed bylaws changes say Republicans need to be able to hold errant members to account, often citing U.S. Rep. Liz Cheney, the Wyoming Republican who has publicly opposed former President Donald Trump. Opponents say it amounts to a purity test guaranteed to drive voters away from the GOP.

The measure is a revised version of a proposal floated last month that would have allowed the county GOP to strip local Republicans of their membership in the party — something party leaders later acknowledged could have violated state law, which lets Coloradans join whatever political party they choose.

► Denver Public Schools will be forced to make staff cuts because of declining enrollment numbers.

► Former House Speaker Frank McNulty is running for CU Regent. McNulty was part of the hiring committee that recommended former CU President Mark Kennedy, who resigned last May after it became clear that everybody at the school hated him.

The memo used the banal language of government bureaucracy, but the proposal it advocated was extreme: President Donald Trump should invoke the extraordinary powers of the National Security Agency and Defense Department to sift through raw electronic communications in an attempt to show that foreign powers had intervened in the 2020 election to help Joe Biden win.

Proof of foreign interference would “support next steps to defend the Constitution in a manner superior to current civilian-only judicial remedies,” argued the Dec. 18, 2020, memo, which was circulated among Trump allies.

The document, a copy of which was obtained by The Washington Post, laid out a plan for the president to appoint three men to lead this effort. One was a lawyer attached to a military intelligence unit; another was a veteran of the military who had been let go from his National Security Council job after claiming that Trump was under attack by deep-state forces including “globalists” and “Islamists.”…

…The previously unreported proposal, whose provenance remains murky, in some ways mirrors other radical ideas that extremists who denied Biden’s victory were working to sell to Trump in the weeks between the November 2020 election and the Jan. 6, 2021, siege of the U.S. Capitol. Many of those proposals centered on using government powers to seize voting machines.

► Be glad you don’t live in Texas. Again.

► Women are holding elected office in Colorado at near-record levels.

► POLITICO profiles Ken Griffin, the Republican megadonor who is helping to fund many 2022 efforts to return Republicans to power in Washington D.C.

► Nobody would disagree that a second Trump administration would be a disaster of epic proportions.

► It’s time to start familiarizing yourself with the term “endemic response.”

► Former Colorado Secretary of State Wayne Williams is running to be the next mayor of Colorado Springs.

Maybe this makes sense if you watch a lot of Fox News: 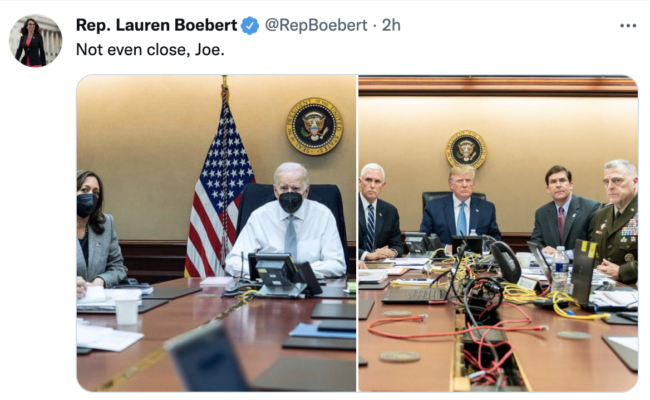 ► Absolutely, positively, do NOT miss the latest episode of The Get More Smarter Podcast, featuring an hilarious and informative interview with House Speaker Alec Garnett: