Get More Smarter on Wednesday (Jan. 19)

You’re gonna need a coat today. Let’s Get More Smarter. If you think we missed something important, please include the link in the comments below (here’s a good example). If you are more of an audio learner, check out The Get More Smarter Podcast. And don’t forget to find us on Facebook and Twitter.

► As The New York Times reports, the U.S. Senate is debating a voting rights bill that might be DOA:

Democrats are pushing forward with what appears to be a futile bid to enact voting rights protections over Republican opposition, planning a vote Wednesday evening on legislation that they say is urgently needed to counter widespread balloting suppression efforts as they move toward a showdown over the Senate filibuster rules that the G.O.P. has repeatedly used to block it.

Senators will spend the day debating the bill, which the House approved last week, and arguing over the very nature of their institution as they clash over the rights of the minority to thwart legislation, and whether the filibuster — a storied Senate tool for asserting them — needs to be weakened.

Though they brought up the legislation on Tuesday using a procedural shortcut that avoided an initial Republican blockade, Democrats were far short of the votes needed to win its passage over unified G.O.P. opposition, and lacked the votes needed in their own party to change Senate rules and enact it unilaterally.

Still, they announced that they would mount a long-shot effort to establish an exception to the filibuster for voting rights bills, requiring opponents to hold the floor for an old-style “talking filibuster” that would allow a final, 51-senator majority vote — instead of the 60 now needed — to move forward after all senators had exhausted their opportunities to speak.

If Democrats can’t get Republicans to do the right thing on voting rights, it appears that the backup plan is to at least force them to go on record with their opposition.

In related news, the progressive political group Emily’s List announced that it will no longer support Arizona Democratic Sen. Kyrsten Sinema, on account of the fact that Sinema is not really a progressive lawmaker anymore.

► As Charles Ashby reports for The Grand Junction Daily Sentinel, Mesa County Clerk and Recorder Tina Peters could soon have a lot of extra time on her hands:

About the same time the Mesa County commissioners were voting to remove Clerk Tina Peters permanently as the top election official on Tuesday, the Colorado Secretary of State’s Office filed a new lawsuit seeking to do the same thing.

Similar to its lawsuit against Peters last year that led to her being temporarily removed as the county’s designated election official for the 2021 Coordinated Election, this new lawsuit details things Peters has done and said in an effort to show she isn’t trustworthy to oversee elections.

Peters is facing numerous investigations into possible criminal misconduct and wire fraud, including a local grand jury probe into allegations she and at least four others engaged in tampering with election equipment and official misconduct.

Click here to read more about Peters and her escalating problems.

► Colorado Republicans in the state legislature seem determined to prove to voters that they are completely unserious. This headline from The Denver Post speaks volumes:

► Colorado will provide free KN95 surgical masks thanks in part to a federal government subsidy. Denver7 has more on where you can get your masks.

► State Sen. Brittany Pettersen (D-Lakewood) has confirmed her status as the frontrunner in CO-07, as Ernest Luning reports for the publication formerly known as the Colorado Statesman:

Democratic congressional candidate Brittany Pettersen amassed more than $200,000 in the first five days of her bid for the Colorado seat held by retiring U.S. Rep. Ed Perlmutter, her campaign said.

The Lakewood state senator had received nearly 500 donations through Sunday since announcing her candidacy a week ago, her campaign said, bringing in $157,325 on top of the $44,773 she had left over from a previous run for the same office.

Last week Pettersen also announced a slate of 72 endorsements in a 72-hour period, including high-profile Democrats such as House Speaker Alec Garnett.

► As The Associated Press reports, Colorado’s own Jenna Ellis is joining the federal subpoena club:

The House committee investigating the U.S. Capitol insurrection issued subpoenas Tuesday to Rudy Giuliani and other members of Donald Trump’s legal team who filed bogus legal challenges to the 2020 election that fueled the lie that race had been stolen from the former president.

The committee is continuing to widen its scope into Trump’s orbit, this time demanding information and testimony from Giuliani, Jenna Ellis, Sidney Powell and Boris Epshteyn. All four publicly pushed Trump’s baseless voter fraud claims in the months after the election.

“The four individuals we’ve subpoenaed today advanced unsupported theories about election fraud, pushed efforts to overturn the election results, or were in direct contact with the former President about attempts to stop the counting of electoral votes,” Mississippi Rep. Bennie Thompson, Democratic chairman of the panel, said in a statement.

Ellis is such a hardcore Trumper that she left the Republican Party last summer in protest of the GOP not doing enough to steal the election for her guy.

► Looking for indicators that former President Donald Trump will seek the White House again in 2024? Here’s one:

Any question of whether Trump runs seem to have been answered this morning. His aides have always signaled that if the investigations progressed that he would run for president again https://t.co/U3d38HyJkZ

Here’s more on the latest Trump investigation from The New York Times:

The New York State attorney general, Letitia James, accused Donald J. Trump’s family business late Tuesday of repeatedly misrepresenting the value of its assets to bolster its bottom line, saying in court papers that the company had engaged in “fraudulent or misleading” practices.

The filing came in response to Mr. Trump’s recent effort to block Ms. James from questioning him and two of his adult children under oath as part of a civil investigation of his business, the Trump Organization. Ms. James’s inquiry into Mr. Trump and the company is ongoing, and it is unclear whether her lawyers will ultimately file a lawsuit against them.

Still, the filing marked the first time that the attorney general’s office leveled such specific accusations against the former president’s company. Her broadside ratchets up the pressure on Mr. Trump as he seeks to shut down her investigation, which he has called a partisan witch hunt. Ms. James is a Democrat.

Trump may very well decide that the best way to fight any legal challenges is to get himself re-elected.

► Republican State Rep. Ron Hanks is the center of gravity in the GOP race for U.S. Senate. Republicans have only themselves to blame for this development; when you humor election denialists, you end up with an election denier as a leading candidate.

► Opinions are not facts, and Rep. Stephanie Luck (R-Penrose) is not a doctor.

► President Biden nominated Nina Wang to fill a vacancy on the District Court for Colorado.

► It didn’t take long for new Virginia Gov. Glenn Youngkin to reveal his true colors, which are mostly red.

Biden presented himself as an antidote to his predecessor, offering the promise of what his own campaign ads called “strong, steady, stable leadership” after four years of bedlam under President Donald Trump. But the tumult surrounding the administration’s withdrawal from Afghanistan offered an early glimpse of the cascade of crises that have badly eroded Biden’s image of restoring calm.

Biden on Thursday marks the first full year of his presidency facing intraparty Democratic disarray, stalled legislation, supply chain issues, worrying inflation, rising tensions with Russia and another highly transmissible coronavirus variant called omicron — all of which have led to an approval ratings average stuck in the low 40s.Biden’s staffers and other defenders say he took office facing unprecedented calamity — from a historic pandemic to a struggling economy — and note that despite a thin congressional majority, he managed to pass two major pieces of legislation in his first year: an economic stimulus plan designed to help rescue the country from the pandemic; and a massive infrastructure package.

But the administration has also repeatedly underestimated the magnitude of the nation’s challenges, including failing to anticipate the delta and omicron coronavirus variants, and has struggled to unite the liberal base and the more moderate wing of the Democratic Party. The president and his team have also stumbled in offering a clear and reassuring message, unable to convince many Americans that they understand their travails or that better days are ahead.

► The Colorado Springs Independent looks at a series of new bills introduced by Democrats and Republicans in the state legislature. 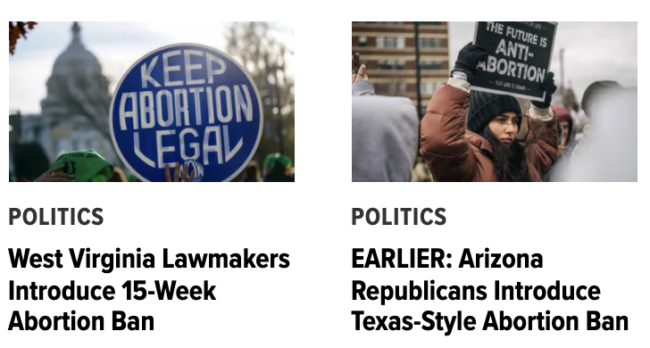 ► Colorado COVID-19 hospitalizations have reached a new high mark. It sorta feels like we can just keep this sentence here for the foreseeable future.

► The MyColorado app is getting some bug fixes.

► If you’re headed anywhere in the Eastern United States this weekend, be prepared for a lot of weather-related delays.

► What could be worse than Donald Trump? Well, maybe Florida Gov. Ron DeSantis.

► Neither The Joker nor Batman are running around in Missouri somewhere.