Republicans Have Some “Different Facts” on Wearing Masks 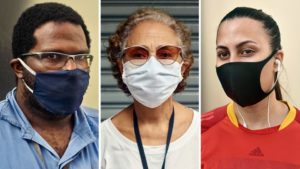 These people had no problem breathing oxygen, but someday their noses might fall off.

As The Colorado Sun explains in its “Unaffiliated” newsletter, Republicans are back to arguing about the definition of a “fact” as they continue their incessant whining about mean people making them wear something over their nose and mouth during a global pandemic:

Republicans in the House on Friday, the third day of this year’s lawmaking term, fought a resolution allowing House Speaker Alec Garnett, D-Denver, to require mask wearing and social distancing among visitors in the Capitol’s committee rooms, some of which are very small. The measure passed, though every GOP representative present voted against the measure…

…The vote came after Rep. Stephanie Luck, R-Penrose, pleaded with Democrats to reconsider the measure. She said her constituents won’t come to Denver to testify in person if they are forced to wear face coverings and instead would have to participate remotely. She also repeated disproven claims about masks, which have been scientifically shown to reduce the spread of COVID-19…

…Assistant House Minority Leader Tim Geitner, R-Falcon, unsuccessfully tried to amend the resolution to prevent the implementation of vaccine mandates and passports, which weren’t even on the table.

Luck’s Friday floor speech is pretty remarkable for its ridiculousness. Take a look yourself or read the transcription that follows:

It’s not a question of…I guess what I’ll say is people who decide not to wear a mask aren’t choosing to put other people in harm’s way. They’re looking at a different set of facts. They’re looking at a different set of arguments and they’re making the best decisions for themselves and their families based on those sets of facts. And so I think this particular decision really does need to be vetted more fully by this body.

Moreover, if you look at the science – and there are scientific studies on this very question. Some that are long standing scientific studies that show that wearing masks is harmful to one’s body. And so we need to understand that there is a risk. And so then the next question becomes, ‘Does the risk get outweighed by the reward of not having those masks on, right? The reward of, I’m sorry, of wearing those masks and allowing…fatal…in order to build herd immunity. [Pols note: It’s not clear what Luck is trying to say here; we transcribed her comments as they were heard]

There are just so many different perspectives out there, and depending on who you are listening to, and how you’re interpreting those facts, you may reach very reasonable conclusions as to what is in the best interest of your own health and the health of those around you. And so, in honor of freedom and in honor of liberty and in honor of the ability to say, not ‘I don’t care about you, and I want to put you at risk.’ Right? That’s not what so many of us who do not wear masks are saying. Even if that is what is being received, let me tell you from my heart of hearts, that’s not what is being said.

I would just ask that you would allow for my constituents to feel comfortable enough coming up here and sitting in committees and looking at you in the eye and sharing their hearts without feeling that they’re going to be kept out. Many of them won’t do that, and so then they’ll end up on remote testimony and we know how that is a diminished form of testimony. So often because of technology and the spits and spurts of listening, right, or if you’re in a particular room and the echoes…and so please I just do ask, allow for everybody to participate. Allow for everybody to come. Don’t discriminate against those who have said, ‘in the interest of health, I have made this decision.’

Truly, please hear my heart. It’s not…it’s not…I don’t wear a mask. It’s true. But I don’t wear a mask because I want to put you all at risk. I [don’t] wear a mask because when I looked at the evidence, when I did the examination, and when I tried to wear a mask, all of the things…all of the evidence, including my own experiences, told me, ‘This is not good for me. And this is not good for those who I am around.’ And so I would just ask, if you have made a different decision, so be it. But allow each of us to make that decision. Thank you.

State Representative Stephanie Luck (R-Penrose) is not a doctor. Luck is an attorney who also works as a sixth-grade teacher when she isn’t wandering the halls of the State Capitol. Luck is also not particularly consistent in her “freedom-loving” exhortations; in 2021, she was a prime sponsor of legislation that sought to allow the State of Colorado to publish personal information about individuals who have abortions.

Luck’s gibberish will be familiar to regular viewers of Fox News, whose Tucker Carlson has been saying for months (without evidence) that forcing children to wear masks is akin to “child abuse.”

In fact, we spent a considerable amount of time trying to find scientific research that supports Luck’s claims about masks constricting the flow of oxygen…to no avail. We did find a May 2021 study from Alberta Health Services that tried really hard to state evidence that wearing masks reduces oxygen levels and/or could be unhealthy; the best they could come up with was a brief mention of limited data suggesting, not surprisingly, that some people might perceive that they aren’t breathing as well when wearing a mask.

If Rep. Luck does actually know about some “long standing scientific studies” showing problems with oxygen supply related to wearing masks, we’d love to see it. Seriously: Please provide a link to any such evidence in the comments below.

You may have a very strong opinion that 1 + 1 = 3. You’re entitled to that opinion, we suppose, but you don’t get to say that it is a different “fact”…even if you are a state lawmaker.