America First or Burn It Down: Jenna Ellis Bails From GOP 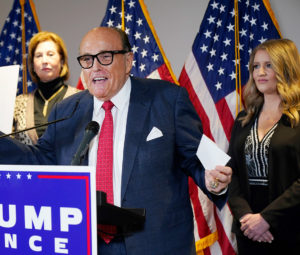 USA TODAY’s David Jackson reports–while of the of three people in the photo at right are facing sanctions up to and including the loss of their law license, ex-Trump couptorney Jenna Ellis of Colorado continues her high-profile transformation from lawyer with all those pesky strict ethical obligations to Newsmax pundit where…well, don’t be silly:

A lawyer who worked on Donald Trump’s election challenges says she is leaving the Republican Party in the wake of reports that an RNC official described her election fraud claims as “a joke.”

“What Rudy and Jenna are doing is a joke and they are getting laughed out of court,” Riemer said in an email. “They are misleading millions of people who have wishful thinking that the president is going to somehow win this thing.”

I’m not quitting the GOP. The GOP quit me and all true conservatives. I will always be a voice for conservatism and the truth.

We can reform the GOP if we stop sending money to the RINOs and liars and back only conservative, America First candidates.#RonnaMustGo https://t.co/jp3NRXfe8i

Ellis claims further that the Republican National Committee under Ronna Romney McDaniel has possession of some $200 million raised by ex-President Donald Trump for the purpose of overturning the 2020 elections, which is obviously not being used for that right now and most self-interested Republicans should be fine with that. Don’t look for Ellis’ departure from the GOP to be permanent, either–in fact, there’s a groundswell on the MAGA right forming right now that could topple the current RNC leadership rather than let resistance to the “Big Lie” live on even in the closet. In a few months Ellis may well announce her triumphant return to a fully purged MAGA-owned GOP.

Even while her lawyer colleagues in Trump’s attempted overturning of democracy suffer the consequences, Ellis is reaping benefits beyond anything she could have hoped for as a low-level right-wing sort-of-lawyer with a grossly inflated resume. Riding Trump’s maleficient resurgence instead of mourning her career’s ignominious end is a fate Ellis should be grateful for–and we assume she is, just for all the wrong reasons.