The failing NY Times plans to run a hit piece today. They’re trying to undermine the public’s confidence in the President’s election integrity battle by pushing a false “report” on my credentials & experience. 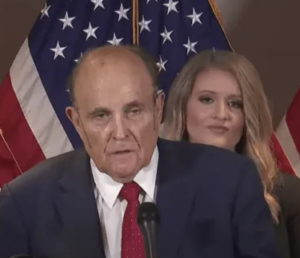 And sure enough, today the New York Times published a decidedly unflattering deep dive into the record of the Colorado Christian University “professor of constitutional law” who along with Rudy Giuliani has wrested control of Trump’s legal strategy to challenge the results of the election, and steered the 45th President toward an inevitable public relations flameout to distract from the pain of losing by six million votes and counting:

By late 2018, regular viewers of cable news would come to know Ms. Ellis as a “constitutional law attorney” — her preferred title — who aggressively came to Mr. Trump’s defense as he faced investigation and impeachment.

But a review of her professional history, as well as interviews with more than a half-dozen lawyers who have worked with her, show that Ms. Ellis, 36, is not the seasoned constitutional law expert she plays on TV…

Ms. Ellis’s work appears to largely be in a public relations capacity. [Pols emphasis] The Trump campaign and its supporters have so far filed about 50 election-related lawsuits. She has not signed her name or appeared in court to argue a single one.

As for Ellis’ self-described former job as “professor of constitutional law” at CCU, the facts aren’t all that auspicious for either the school or the instructor:

Colorado Christian does not have a law school or a program in constitutional law. [Pols emphasis] Ms. Ellis taught pre-law and political science to undergraduates and was part of the team that developed and advised a moot court program, according to a university spokesman. Eventually she was made an assistant professor of legal studies — but never a “professor of constitutional law,” which is how she identified herself in pieces for The Washington Examiner that she started writing in 2017.

The Times reports that it was Ellis’ appearances on Fox News that put her on Trump’s radar, but it wasn’t until the reported takeover over Trump’s legal effort by Giuliani and Ellis that her role became central–even more so after Ellis personally announced the disowning of fellow attorney Sidney Powell from the “official” legal team as Powell’s wild claims of a vast conspiracy wrecked her credibility even with Tucker Carlson.

Overall, Ellis’ ascension with Giuliani appears to be coincident with the transformation of the “legal strategy” seeking to actually undo the election via court action into a public relations effort to recycle claims of election fraud outside of actual courtrooms or other venues in which testimony might occur under oath. Giuliani denies reports that he’s being paid $20,000 a day to keep the PR charade going long enough to potentially influence Republican state lawmakers to ignore their state’s voters and appoint a pro-Trump slate of Electors–which is the only rational reason for any of this to be continuing weeks after the final result of the election has been plain. From what we can see, anything even close to that number is more money than Ellis has made in her life.

All we can say is, we hope Jenna Ellis is getting paid a lot of money.

Because, well, a person’s soul should be worth a lot of money.