Get More Smarter on Wednesday (Dec. 1) 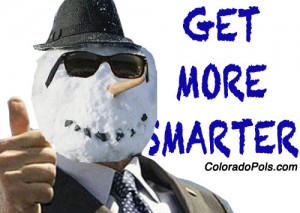 Yeah, we know there isn’t much snow right now in Colorado; we’re trying to suggest it into existence. Let’s Get More Smarter. If you think we missed something important, please include the link in the comments below (here’s a good example). If you are more of an audio learner, check out The Get More Smarter Podcast. And don’t forget to find us on Facebook and Twitter.

► All eyes are on the U.S. Supreme Court as the nation’s top judges debate, potentially, the fate of legal abortion in the United States. From The New York Times:

The Supreme Court seemed poised on Wednesday to uphold a Mississippi law that bans abortions after 15 weeks of pregnancy, based on sometimes tense and heated questioning at a momentous argument in the most important abortion case in decades.

Such a ruling would be flatly at odds with what the court has said was the central holding of Roe v. Wade, the 1973 decision that established a constitutional right to abortion and prohibited states from banning the procedure before fetal viability, or around 23 weeks.

But the court’s six-member conservative majority seemed divided about whether to stop at 15 weeks, for now at least, or whether to overrule Roe entirely, allowing states to ban abortions at any time or entirely.

► Congressperson Lauren “Q*Bert” Boebert (R-ifle) has become a YUGE story nationwide. Consistent with her brand, however, Boebert is making headlines for the wrong reasons.

Boebert continues to generate news coverage for her disgusting comments suggesting that Democratic Rep. Ilhan Omar is a terrorist/suicide bomber. The Denver Post editorial board felt compelled to apologize for Boebert’s behavior, while former President Donald Trump decided to see if he could say things about Omar that were even WORSE.

Boebert inspired TWO separate columns from Chris Cillizza of CNN, one on Tuesday and another on Wednesday. Today, Cillizza ultimately comes to a conclusion that we’ve discussed for years in this space:

As ugly and unsavory as Boebert’s actions are, they do provide insight into just how radically the mission of serving in Congress has changed — particularly for those, like Boebert, who have come into politics in the age of Donald Trump…

…Gone is the idea that politics is about making the country (and its people) better through compromise. Or even that passing any sort of legislation — or sponsoring any — matters at all.

In its place is politics as performance. Running for office and being in office are about promoting your personal #brand (barf). The best way to show “effectiveness” is not in bills passed but in appearances on Fox News…

…The unfortunate thing for our politics is that there are a whole lot of Republican politicians like Boebert in the pipeline. She’s the rule, not the exception, in the modern Republican party.

Performative Obstruction. That’s what this is. That’s what it has always been with Boebert. Whether or not she actually believes the crap that comes out of her mouth is secondary to the overall goal of just being the center of the discussion. Boebert also doesn’t seem to care that her persistent lies about Rep. Omar might literally be life-threatening accusations.

I grew up on the Western Slope. My parents and most of my family live there. It will always be home.

The people of Western Colorado are decent, kind, compassionate and fair. Their communities are open and welcoming. My heart breaks for the way they are represented in Congress.

► Congressional Republicans, including House Minority Leader Kevin McCarthy, are doing NOTHING in response to Boebert’s hateful rhetoric. McCarthy is instead trying to prevent GOP caucus members from tearing each other apart over Boebert’s horribleness.

Elsewhere, Robin Givhan of The Washington Post weighs in on The exhausting, soul-sapping meanness of Lauren Boebert.

Dana Milbank of The Washington Post writes that Boebert “is what George W. Bush called ‘the worst of humankind.'”

► As Jason Salzman writes for The Colorado Times Recorder, Boebert is throwing everything she can imagine at Rep. Omar — including completely unsupported claims that Omar denigrated Jews when she moved into her congressional office.

► Do Republicans such as Lauren “Q*Bert” Boebert and Georgia Republican Marjorie Taylor Greene represent the true Republican base? Olivier Knox of The Washington Post wonders if 2022 will answer that question:

The online fight between Republican Reps. Marjorie Taylor Greene (Ga.) and Nancy Mace (S.C.), both not quite through their first year in office, was personal and pointed. And it illustrated the explosive Republican intraparty tensions that will shape both the 2022 midterm elections and how the House will function (or not function) if the GOP retakes the majority.

As expected, Ganahl has gotten away with this, and in recent Colorado political coverage you can find policy views on taxes, crime, critical race theory, rural issues and more from a figure who began her campaign by repeatedly refusing to acknowledge that the earth is round. https://t.co/oLMupqMEu9

As Marshall Zelinger of 9News reported earlier this week, Ganahl is already openly telling right-wing audiences that she is going to campaign on things that might be attractive to Unaffiliated voters only because she thinks it could her get elected — not because these policies reflect her actual beliefs.

► How are things going in the mythical land of right-wing recalls? This sentence sums things up pretty well: The “Recall Polis – Griswold 2021” committee would need to raise $1,307 just to be able to report that they have no money.

► If you are going to keep a lion or tiger as a pet, you should not be surprised if one day your “pet” decides to eat your arm off. Republicans in Mesa County are finding out that this rule applies equally well to right-wing activists that they once courted. As Charles Ashby writes for The Grand Junction Daily Sentinel:

Mesa County officials are taking seriously recent threats of violence from voter-fraud conspiracy theorists in the past week.

As a result of threats uttered in a recent Zoom meeting between several of them, including Mesa County Clerk Tina Peters and Garfield County resident Sherronna Bishop, the county is in the process of beefing up its security just in case.

Some of the conspiracy theorists who where on the call said that if the government doesn’t back off on its “tyrannical” approach to investigating Peters, Bishop and others allegedly involved in breaches of election security protocols, violence may ensue.

“I have no desire whatsoever for violence, but I promise you the people in the country are not going to go down,” said retired Air Force Col. Shawn Smith, who has been working with Bishop, Peters and others in pointing out alleged voter fraud, to which they continue to offer no solid evidence.

Right-wing activists are threatening Republican elected officials with violence if they don’t let Mesa County Clerk and Recorder Tina Peters and friends get away with breaking into the county’s election computers.

► As The Washington Post reports, Congress could trigger yet another government shutdown as Republicans refuse to make any effort at governing:

The U.S. government on Wednesday teetered one step closer to a potential weekend shutdown, as a number of Republicans seized on a fast-approaching fiscal deadline to mount fresh opposition to President Biden’s vaccine and testing mandates.

Entering the week, Democrats and many Republicans initially had hoped to fund the government before a current spending arrangement expires at the end of Friday. Lawmakers aimed to pass a bill that would finance federal agencies and initiatives at least into late January, buying themselves more time to craft a series of longer-term measures that could sustain Washington through the rest of the fiscal year.

A day later, though, the very catastrophe that congressional leaders had strained so hard to avoid seemed to be a real possibility — offering a fresh glimpse of the rancor that has hamstrung Capitol Hill from fulfilling even the most basic duties of government in recent months.

Yeah, let’s put these same Republicans in control of the majority in 2022. What could possible go wrong?

Greg Sargent of The Washington Post marvels at the absurdity of the idea that Republicans could force a government shutdown over vaccine mandates:

When placed in the context of all the other GOP maneuvering on covid-19, it’s hard to discern a broader consistent organizing principle here other than opposition to pretty much any kind of collective action that might mitigate the pandemic…

…In political terms, this is pretty loopy. The public hates government shutdowns: Recall that during the 2013 standoff, the ACA was very unpopular at that point, but Republicans got their behinds handed to them nonetheless.

By contrast, vaccine mandates for private companies have plurality support. Staging a government shutdown over this policy would be a great way to boost its popularity.

But obviously, this is not aimed at a broad mainstream audience. It’s aimed at the base and the right-wing media apparatus.

► Republican congressional candidate Lori Saine is working very hard to make sure that Coloradans understand that she might well be the craziest Republican of them all.

Saine is running for Congress in Colorado’s new 8th Congressional district. Meanwhile, another candidate is joining the Democratic field of candidates in CO-08…whoever he is.

► As The Colorado Sun reports, Colorado’s Independent Ethics Commission needs more help to actually do something about ethics violations.

► Health officials in Colorado are keeping a close eye out for the Omicron variant of COVID-19. Colorado Public Radio has more on what YOU can do to help stop the spread of the virus.

► Colorado is doing pretty well when it comes to vaccinating children between the ages of 5 and 11 against COVID-19.

► As CBS4 Denver reports, Colorado is seeing a disproportionately large share of workers quitting their jobs. Axios Denver notes that Colorado’s unemployment rate could be considered much higher than has been reported if you stop counting people who are working jobs that do not pay a living wage.

Former President Donald Trump reportedly tested positive for the coronavirus three days before the first presidential debate with Joe Biden, according to an upcoming book from Trump’s former chief of staff Mark Meadows.

Absolutely nobody would be surprised if this is true. 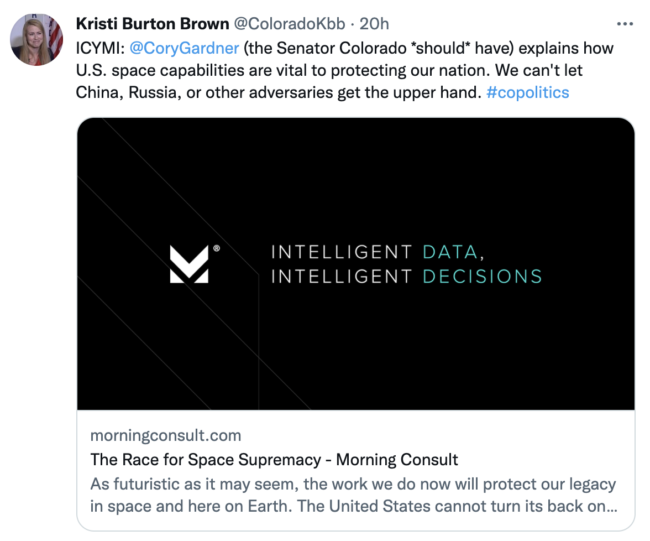 ► Because of course he is.

Trump tested positive for COVID-19 the day before an event with Gold Star families who he later blamed for infecting him https://t.co/gwo1wCUhUW

► The “MyPillow” guy seems to be paying a bunch of Colorado people to help promote the “Big Lie.”

► This week on The Get More Smarter Podcast, hosts Jason Bane and Ian Silverii talk with Charles Ashby of The Grand Junction Daily Sentinel about Tina Peters, Lauren Boebert, and other weird happenings on the Western Slope.