We’ve been doing our best to keep an eye on the latest efforts by right-wing grifters to “recall” Gov. Jared Polis and/or Secretary of State Jena Griswold. When last we checked — on August 31 — “lead organizer” Lori Cutunilli was promising the Facebook faithful that recall petitions were just a few weeks away from circulation!

However, Recallpalooza seemed to be gasping for air by the time California Gov. Gavin Newsom easily turned back an attempt to oust him from office in September. According to the latest campaign finance report for the “Recall Polis – Griswold 2021” committee, momentum remains elusive: 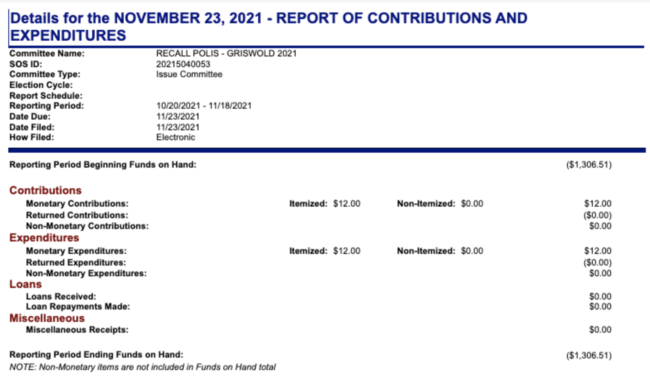 You’re reading that correctly. The recall committee raised $12 in the last month — all of which came from Cutunilli herself. Things are so bad, in fact, that they would need to raise $1,307 just to be able to report that they have no money.

The grift may be strong among Colorado Republicans, but it is apparently not without end.