Get More Smarter on Wednesday (Oct. 6)

Today is National Noodle Day and National Coaches Day. If you can figure out how to celebrate those together, we’re all ears. Let’s Get More Smarter. If you think we missed something important, please include the link in the comments below (here’s a good example). If you are more of an audio learner, check out The Get More Smarter Podcast. And don’t forget to find us on Facebook and Twitter.

► As The Washington Post reports, Senate Republicans are hell-bent on driving the United States right off the fiscal cliff:

Senate Republicans on Wednesday plan to block Democrats from raising the country’s debt ceiling, daring President Biden and his party’s top lawmakers to devise another path forward just 12 days before the U.S. government could run out of flexibility to pay its bills.

For the third time in as many weeks, Senate Majority Leader Charles E. Schumer (D-N.Y.) is set to hold a vote on a measure that would suspend the borrowing limit into next year, aiming to act before Congress blows past an Oct. 18 deadline that could catapult the country into an economic recession.

But the proposal is likely to be as doomed as the two that preceded it. Democrats for the moment cannot advance in the debate over the debt ceiling unless 10 GOP lawmakers join them — and Republicans once again are refusing to supply the votes as part of their broader campaign to oppose Biden’s economic agenda.

“They basically want us to be aiders and abettors to their reckless spending and tax policies, and we just aren’t going to do it,” said Sen. John Cornyn (R-Tex.). [Pols emphasis]

Now, remember that raising the debt limit is necessary in part to help pay for expensive policies ENACTED UNDER THE TRUMP ADMINISTRATION.

Earlier this week, Chris Cillizza of CNN broke down the dangerous game that Senate Minority Leader Mitch McConnell is playing:

McConnell knows — he’s a very smart dude — that his party’s current stance on the debt limit is utterly hypocritical.

But what he’s betting on is this: Democrats control the White House, the Senate and the House of Representatives. Knowing that, voters will put blame on Democrats if the debt ceiling isn’t raised.

That’s the calculation McConnell is making — that complete opposition to anything and everything that happens in Washington between now and November 2022 will best position Republicans to retake the House and Senate majorities.

As for what’s best for the country? That’s not relevant to McConnell or Senate Republicans.

Americans say 62 – 34 percent that they support a roughly $1 trillion spending bill to improve the nation’s roads, bridges, broadband, and other infrastructure projects. This compares to 65 – 28 percent support in August. In today’s poll, Democrats support the bill 85 – 11 percent, independents support it 62 – 35 percent, and Republicans oppose it 58 – 38 percent.

Americans say 57 – 40 percent that they support a $3.5 trillion spending bill on social programs such as child care, education, family tax breaks, and expanding Medicare for seniors, compared to 62 – 32 percent support in August. In today’s poll, Democrats support the bill 92 – 5 percent, independents are split with 50 percent supporting it and 48 percent opposing it, and Republicans oppose it 68 – 28 percent.

The Associated Press has more on a pared-down spending bill that is now being discussed. As The New York Times reports, Republican refusal to budge on the debt limit might be moving more Democrats toward supporting changes to the filibuster,

One week ahead of a deadline to submit its plan for new statehouse districts to the Colorado Supreme Court for review, the state’s Independent Legislative Redistricting Commission on Tuesday received details of a third and final plan proposed by nonpartisan state staff.

The maps released ahead of the commission’s Tuesday night meeting draw new boundaries for 65 Colorado House of Representatives districts and 35 state Senate seats, as proposed by state staff based on previous feedback from the commission’s 12 appointed members. Any further changes to the two maps must be approved by a two-thirds vote of the panel, which consists of four registered Democrats, four Republicans and four unaffiliated voters.

The deadline for the commission to submit its maps to the Supreme Court is Oct. 15. If commissioners can’t approve a final plan with at least eight votes by then, the third staff plan will be submitted.

► Colorado Republicans remain committed to the political strategy of complaining about mask and vaccine requirements, even when that message makes no sense whatsoever. State Rep. Tim Geitner (R-Colorado Springs) is all worked up about the idea that kidney transplant patients might first be required to get vaccinated against COVID-19, which to most rational people would seem to be a very logical and obvious request.

► Colorado Republican Party Chairperson Kristi Burton Brown has some serious explaining to do after court documents revealed that KBB was the leader of FEC United, a far-right conspiracy group, right up until the point in which she started running for the job of GOP Chair. 9News has more on this story:

Burton Brown and the Colorado Republican Party did not respond to 9NEWS’ questions about FEC United, an election rigging conspiracy theory group, and its affiliated militia, the United American Defense Force.

The extent of Burton Brown’s involvement with FEC United was revealed by the group’s founder Joe Oltmann and current president, Stuart Butler, in sworn depositions in September and August, respectively…

…Oltmann testified that Burton Brown was president of FEC United in November 2020 while serving as vice-chair of the Colorado Republican Party and left FEC United to run for state party chair. She was elected to lead the state party in March 2021.

► New Congressional redistricting maps, which are likely to be confirmed by the State Supreme Court, have forced some Colorado politicians to make difficult decisions. That includes State Sen. Kerry Donovan, whose campaign against Rep. Lauren “Q*Bert” Boebert in CO-03 might not make as much sense as it did just a few weeks ago.

► Republican gubernatorial candidate Heidi Ganahl is (predictably) wading into the manufactured debate about Critical Race Theory as she tries to convince her right-wing base to take interest in her campaign.

► Republican U.S. Senate candidate Eli Bremer announced a bunch of “county coordinators” for his 2022 campaign. The list includes a fair number of names that you could charitably call “controversial.”

The World Health Organization on Wednesday endorsed the first ever vaccine to prevent malaria, debuting a tool that could save the lives of tens of thousands of children in Africa each year.

Malaria is among the oldest known and deadliest of infectious diseases. It kills about half a million people each year, nearly all of them in sub-Saharan Africa — among them 260,000 children under age 5.

The new vaccine, made by GlaxoSmithKline, rouses a child’s immune system to thwart Plasmodium falciparum, the deadliest of five malaria pathogens and the most prevalent in Africa. The vaccine is not just a first for malaria — it is the first developed for any parasitic disease.

► Municipal employees in Denver may soon be eligible for a $400 bonus for getting their COVID-19 vaccinations.

► The City of Boulder is expanding an outdoor dining ordinance into 2022.

A report released Tuesday, titled Trouble in the Air: Millions of Americans Breathed Polluted Air in 2020, also shows the number of days where elevated air pollution occurred in areas across the U.S.

“The biggest issues here are actually how we produce our energy,” Rex Wilmouth, a Senior Program Director for Environment Colorado, said.

Experts say wildfires contribute to the elevated ozone, or air pollution, but they point to climate change as a primary cause.

► Somebody find that wolf!

► POLITICO provides a cheat sheet on the 36 races for governor in 2022. Colorado barely gets a mention since incumbent Gov. Jared Polis is thought to be pretty safe.

Cool story, Congressman Ken Buck (R-Greeley)! But this is from…California. 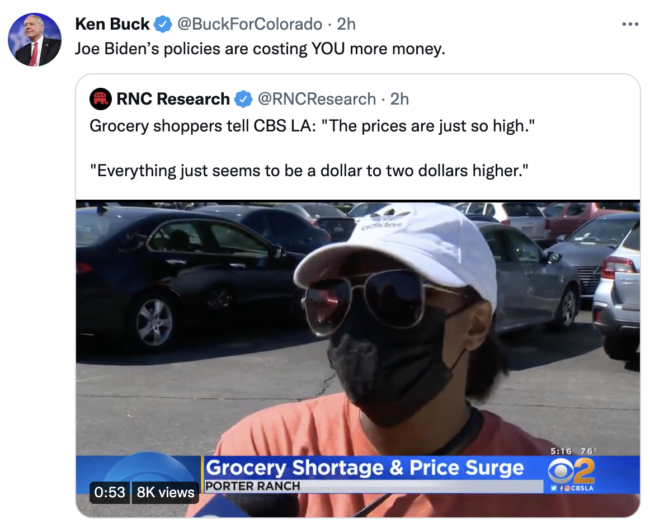 ► Schume Navarro, an odd candidate for Cherry Creek school board, gets roasted in this 9News story about her efforts to complain about being required to wear a mask at candidate forums:

In its response to a lawsuit from school board candidate Schumé Navarro, Cherry Creek School District (CCSD) said she has “substantially undermined” her own arguments against wearing a mask at candidate forums.

The district filed its response on Monday, nearly a week after Navarro’s lawsuit alleged the district violated the Americans with Disabilities Act (ADA) when it would not allow her into the forums without a mask….

…Navarro had provided the district with a note from her counselor saying she “cannot medically tolerate” a face mask because of trauma she experienced in the past. In her original complaint, Navarro said she panics when her mouth and nose are covered, and she has a nasal deformity, as well.

But according to a different social media post cited by the district, Navarro said “my doctors at UCHealth will not give an exemption.”

Yeah, let’s put THIS person on a school board.

► Colorado Republicans are completely obsessed with “The Big Lie,” demanding obedience from candidates for offices as unrelated to election security as local school board races. State Republican Party Chair Kristi Burton Brown, meanwhile, is making a half-assed attempt to convince Republicans to talk about anything else.

► Congressperson Lauren “Q*Bert” Boebert demonstrates her allegiance to the oath of outrage.