Get More Smarter on Tuesday (July 13)

Don’t believe the rumors you might have heard: The Home Run Derby actually did come to an end. Let’s Get More Smarter; if you think we missed something important, please include the link in the comments below (here’s a good example). If you are more of an audio learner, check out The Get More Smarter Podcast. And don’t forget to find us on Facebook and Twitter.

With all but the most affluent families eligible to receive up to $300 a month per child, the United States will join many other rich countries that provide a guaranteed income for children, a goal that has long animated progressives. Experts estimate the payments will cut child poverty by nearly half, an achievement with no precedent…

…While the government has increased many aid programs during the coronavirus pandemic, supporters say the payments from an expanded Child Tax Credit, at a one-year cost of about $105 billion, are unique in their potential to stabilize both poor and middle-class families.

“It’s the most transformative policy coming out of Washington since the days of F.D.R.,” said Senator Cory Booker, Democrat of New Jersey. “America is dramatically behind its industrial peers in investing in our children. We have some of the highest child poverty rates, but even families that are not poor are struggling, as the cost of raising children goes higher and higher.”

Among America’s 74 million children, nearly nine in 10 will qualify for the new monthly payments — up to $250 a child, or $300 for those under six — which are scheduled to start on Thursday. Those payments, most of which will be sent to bank accounts through direct deposit, will total half of the year’s subsidy, with the rest to come as a tax refund next year.

Colorado Newsline has more on how the program will work. Democrats are trying to make the child tax credit a permanent policy.

► At least you don’t live in Mesa County…unless you do, in which case, that sucks and we are very sorry.

► Voting rights are still a top issue as the Major League Baseball All-Star Game kicks off on Tuesday night. The Denver Post has more on an unusually-political meaningless baseball game.

► Texas Republicans are once again trying to restrict voting rights, which has forced Democratic lawmakers to flee the state in a last-ditch effort to preserve election integrity.

► Colorado’s Republican Members of Congress are a special bunch. Congressperson Lauren “Q*Bert” Boebert (R-ifle) is a raving lunatic; Rep. Doug Lamborn (R-Colorado Springs) is a barely-functional human being; and Rep. Ken Buck (R-Greeley) might be the most intellectually dishonest of the bunch.

Back in March, Buck wrote an Op-Ed decrying the use of earmarks in Congress, saying they go “hand-in-hand with corruption.” Today, Buck tweeted this:

I support @greeleygov‘s application to @USDOT for $25 million for the Greeley Regional Interchange Project, which would improve safety and accessibility along U.S. Highway 34.https://t.co/WvycGOxsoi

If there is an opinion to be held on any subject, Buck will grab onto it.

► The editorial board of The Aurora Sentinel bemoans the buffoonery at play with the Aurora City Council on the issue of filling a vacant position:

Republicans and members from the political right want to appoint Steve Sundberg, a long-time local tavern owner and registered Republican. Members on the left want to appoint Ryan Ross, a top-level college administrator and registered Democrat. Ross has made clear he seeks only to fill the vacancy through the election, and he will not run for that position. Sundberg announced his candidacy for Ward II long before Johnston stepped down.

Without doubt, Ross would carry the liberal torch until November. Sundberg, in city council interviews, hints that he would align with the council’s right on hot-button issues such as homelessness and police reform. Also unarguable is that the residents of Ward II, living in essentially northeast Aurora, have reliably moved politically to the left, just as much if not more so than almost all the rest of Aurora. Voter registrations and past elections are indisputable there.

Mayor Mike Coffman, a lifelong Republican who’s held numerous state and federal offices as a registered Republican, and other pronounced conservatives are trying to seize an opportunity to thwart voters and swing city council votes their way.

It’s a political ploy that has come to exemplify the dispiriting and disingenuous nature of American politics.

► Here’s yet another sign that the Republican Party is just an extension of whatever Donald Trump requires: The Alaska Republican Party is turning its back on Sen. Lisa Murkowski, a four-term Senator who drew the ire of Trump because she voted to convict him on impeachment charges earlier this year.

► A federal judge dismissed a lawsuit by a Colorado delivery driver who was incensed at being forced to wear a mask and insisted that the COVID-19 pandemic wasn’t real.

► As The Colorado Sun reports in its “Unaffiliated” newsletter, wildfires could turn out to be a major election issue:

Wildfire could be a consequential issue at the ballot box, according to a new poll of Colorado adults conducted by Morning Consult on behalf of the Environment Defense Action Fund.

The survey of 300 people between June 17 and 26 revealed that 67% would be more likely to vote for a U.S. Senate candidate who supports aggressive action to address wildfires. That percentage increases among Democratic and unaffiliated voters.

Colorado is already dealing with one of the earliest wildfire seasons on record.

► It’s about that time when Republican statewide candidates should start announcing campaigns for 2022.

► Lunatic Georgia Congresswoman Marjorie Taylor Greene is super-excited to be the keynote speaker for El Paso County Republicans next month. Colorado Democrats are equally excited, though for much different reasons.

► Shit is getting expensive because of worldwide supply shortages.

► 9News reports on another batch of bill signings by Gov. Jared Polis.

► Colorado Secretary of State Jena Griswold raised a record amount of money for a SOS candidate in the Q2 reporting period.

Whatever you say, Comrade Boebert: 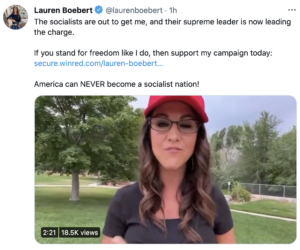 About a week ago, a company in Utah that makes custom modifications to firearms debuted what it described as a fun new product: a kit that encases Glock handguns in red, yellow and blue Lego blocks, refashioning lethal weapons to look exactly like children’s toys. 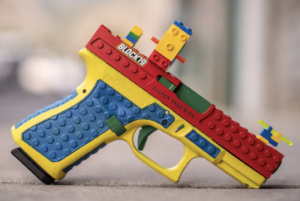 This is a working gun. Really.

► Here’s a solid ICYMI that we also missed: A former Aurora police officer who was demoted for wrongfully detaining a black family has filed to be a Republican candidate for Sheriff in Los Animas County. Darian Dasko wants to take his, uh, talents to a southern Colorado county near the New Mexico border.