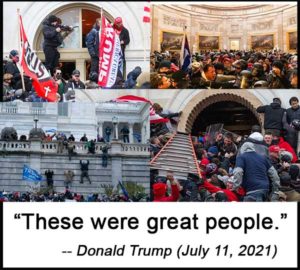 Following the deadly protests in Charlottesville, VA in August 2017, then-President Trump infamously said that “there are very fine people on both sides” in reference to a violent confrontation spurred by white supremacists who were angry about the potential removal of a statue of Robert E. Lee. Trump was roundly condemned for those comments by Democrats and Republicans alike; hell, even former Sen. Cory Gardner found a conscience and spoke out against Trump’s statement (which was basically the last time Gardner publicly criticized Trump).

On Sunday, Trump took what was probably the inevitable next step in his journey toward normalizing white supremacy and insurrection. As POLITICO reports:

Former President Donald Trump on Sunday widely praised those who attended the Jan. 6 rally that preceded the insurrection at the Capitol, repeatedly using the word “love” to describe the tone of the event…

…Speaking on “Sunday Morning Futures with Maria Bartiromo” on the Fox News Channel, he also said the rally participants were patriots, that some of them were unjustly arrested and jailed, and that a woman who was shot and killed by law enforcement during the insurrection was a great hero.

The remarks reflected recent efforts by Trump and his supporters to cast themselves as the aggrieved parties from the Jan. 6 riot, which left five people dead and others injured — and, for a brief time, halted the wheels of democracy as President-elect Joe Biden’s victory over Trump in the Electoral College was being confirmed by Congress.

You had over a million people there. They were there for one reason, the rigged election. They felt the election was rigged. That’s why they were there. And they were peaceful people. These were great people.

The crowd was unbelievable. And I mentioned the word love. The love — the love in the air, I have never seen anything like it.

And that’s why they went to Washington…

Capitol Police officers bar the door to the House Chambers on Jan. 6 to keep out the “love.”

As Philip Bump writes for The Washington Post, the rubicon has been crossed:

It was obvious on Jan. 6 that Trump was sympathetic to the rioters, as he made clear in his public comments on that day. Both because he was quickly muted by social media companies and, apparently, during a period of political temperature-taking, he largely didn’t wave away the rioters’ actions in the months that followed the violence. But he’s slowly been moving back to his original position, the one he reportedly articulated to House Minority Leader Kevin McCarthy (R-Calif.) in a mid-riot call that day: that the rioters simply loved their country…

…So now the Capitol rioters are tremendous, blue-collar folks battling an unfair system. They were simply in Washington to have their voices heard on the false belief that Trump and allies, including Bartiromo, fostered. They were the allies of law enforcement, not a mob that was seen on video attacking and abusing Capitol Police officers.

Trump’s comments on Sunday are more than just his typical airing of grievances and conspiracy theories. With this one interview, Trump has officially and unequivocally placed himself — and all those who continue to follow him, including Colorado Rep. Lauren “Q*Bert” Boebert — 100% ON THE SIDE OF THE INSURRECTIONISTS WHO BROKE INTO THE CAPITOL.

Trump isn’t even bothering with the “both sides are great” bullshit anymore. If you forced your way into the Capitol in hopes of kidnapping Nancy Pelosi, killing Mike Pence, and/or overthrowing the Electoral College on Jan. 6, then you are Trump’s kind of person. None of this should come as much of a surprise to anyone with a functioning brain, but it’s still jarring to see the former President of the United States of America completely embrace an insurrection.

To what extend it was ever possible, politicians can no longer stand with Trump and condemn the Jan. 6 insurrection. The line is clear.