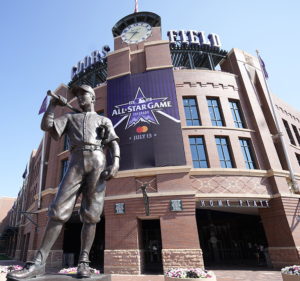 It’s a big-ticket week in Colorado, as the not long- but highly- anticipated Major League Baseball All-Star Game’s week of events leading up to tomorrow’s big game draw thousands of spectators and millions of dollars to lower downtown Denver. Despite a sporting willingness by Colorado’s Democratic elected leadership to downplay the politics of the All-Star Game’s relocation from Georgia to Colorado, politics is unavoidably front and center in this week’s celebrations after Republicans outside of Colorado wept, wailed, and ultimately sued to stop MLB’s decision to not reward Georgia’s passage of vote suppression legislation earlier this year.

With that said, as Denver Post’s Justin Wingerter recapped the story of the 2021 All-Star Game’s move to Denver, it wasn’t just Colorado’s model accessible and secure elections that lured the All-Star Game to Coors Field, but also quick work by Gov. Jared Polis and Denver Mayor Michael Hancock to freshen an existing proposal to host the game in future years:

Denver’s city government had spent five years polishing and presenting a plan for an All-Star Game at Coors Field. It first tried for 2022, then 2024. But here was a more immediate option. State and city officials went to work.

Gov. Jared Polis, a baseball fan, called MLB Commissioner Rob Manfred, Rockies owner Dick Monfort and Denver Mayor Michael Hancock. The opportunity was so unexpected that the city’s marketing arm, Visit Denver, didn’t have time to update its proposal. Instead, it began sending messages to MLB that Denver’s hotels and convention center were available in July.

Obviously, without Colorado’s model accessible and secure election system we would not have been worthy of landing the All-Star Game after MLB pulled the game out of Georgia in the first place. But it was being serendipitously ready with a plan to execute the event on short notice, and political leaders keen to jump on the opportunity presented by the decision to pull out of Georgia, that made this week’s multimillion-dollar economic boon for Colorado as easy call.

As for Colorado Republicans? It depends on who you ask, but it’s awkward:

“People watch sports to be entertained, not to be lectured about politics,” U.S. Rep. Lauren Boebert, a Silt Republican, said in a news release. “… I’ve lost trust in the MLB, the American people have lost trust in the MLB and now this organization must be subject to the same antitrust laws as everyone else. Let me be clear, if you go woke, you go broke.”

Next came a lawsuit by a conservative group, the Job Creators Network, that would have forced MLB to play the game in Georgia. Its lawyer was Howard Kleinhendler, who had tried and failed to overturn the 2020 presidential election on behalf of Donald Trump. The lawsuit was criticized almost immediately by a judge who called it “weak and muddled.” It was later dropped entirely.

The Job Creators Network, as readers know, seemed to have an awful lot of ties to Colorado Republican politics right up until this half-baked lawsuit was filed. Heidi Ganahl, whose announcement to (probably) run for governor is considered imminent, is the former director of the Job Creators Network–but when asked by 9NEWS about the lawsuit she insisted she had nothing to do with it. Ganahl claimed further to be happy about the All-Star Game having moved to Denver…but also said it was “not fair” to Georgia. This is what’s known in politics as “flopping like a fish,” and it was not a good sign for Ganahl’s incipient campaign.

Others, like Rep. Lauren Boebert as you can see, could care less about Colorado’s economy! For Boebert, choosing Republican sour grapes over Colorado jobs comes naturally.

Look folks, we get it. Republicans like baseball just like Democrats, and everyone wants Republicans to spend their money boosting Denver’s economy. Unfortunately for Republican baseball fans, a major Republican political mistake is inextricably linked to the game’s presence in Denver this week. That’s just the way it is. Much like acknowledging the fact that kids need to learn the truth about racism, they’re going to have to suck it up and admit that Georgia made a mistake passing vote suppression legislation to appease Donald Trump’s ego–and the market can respond how it wants.

In the long run, there’s no question how this all will be judged by history.