Get More Smarter on Monday (April 26) 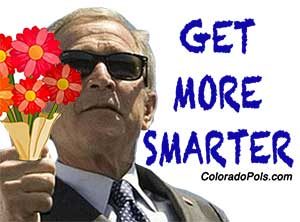 Happy Alien Day. Please celebrate responsibly. Let’s Get More Smarter; if you think we missed something important, please include the link in the comments below (here’s a good example). If you are more of an audio learner, check out The Get More Smarter Podcast. And don’t forget to find us on Facebook and Twitter.

*Coloradans can now get a COVID-19 vaccine at one of three locations without a prior appointment.

► The United States is sending aid to India as the country battles a massive COVID-19 outbreak that has seen in the neighborhood of 350,000 new infections per day in the past week. As The New York Times reports:

The Biden administration, under increasing pressure to address a devastating surge of the coronavirus in India, said on Sunday that it had removed impediments to the export of raw materials for vaccines and would also supply India with therapeutics, rapid diagnostic test kits, ventilators and personal protective gear…

…The announcement, an abrupt shift for the administration, came after Jake Sullivan, President Biden’s national security adviser, held a call earlier in the day with Ajit Doval, his counterpart in India, and as the Indian government reported more than 349,000 new infections, a world record for a single day. Ms. Horne said the United States had “identified sources of specific raw material urgently required for Indian manufacture of the Covishield vaccine,” the Indian-produced version of the AstraZeneca vaccine.

The situation in India is dire. The country is witnessing perhaps the worst crisis any nation has suffered since the pandemic began, with hospitals overflowing and desperate people dying in line waiting to see doctors — and mounting evidence that the actual death toll is far higher than officially reported. Officials say they are running desperately low on supplies, including oxygen and protective gear, as a deadly new variant is thought to be behind a rise in cases. [Pols emphasis]

Do your part to turn back the coronavirus by getting vaccinated ASAP. Remember, friends: Employers are REQUIRED to provide paid leave for employees who need time off work to get vaccinated.

In related news, the CDC and FDA lifted temporary restrictions on the Johnson & Johnson COVID-19 vaccine over the weekend.

► Colorado is expected to get the official word today that the state’s population growth in the last decade is enough to qualify us for an 8th Congressional District. The Census Bureau will announce updated state population numbers this afternoon.

► Nobody is coming for your meat. Sorry.

► Jesse Paul of The Colorado Sun updates on the status of the “Colorado Option”:

Democratic state lawmakers aiming to drive down health care costs are planning to move forward this week with legislation to potentially create a public health insurance option after roughly a month of still-unresolved negotiations with hospitals, doctors and others in the medical sector.

Two paths forward have surfaced. The first is to continue on with the current version of House Bill 1232, which would give the health care industry a chance to bring down costs and avoid the state offering its own insurance plan. The second path is to swap the original version for legislation akin to what was pursued last year, where instead of the state offering a health insurance option private insurers would be required to offer a highly regulated, standardized plan.

“I think (either) could happen when we go to committee on Tuesday,” said state Rep. Dylan Roberts, an Avon Democrat who is leading the push for House BIll 1232.

Paul’s story in the Sun does not contain any comments — much less policy arguments — from legislative Republicans.

► The Associated Press reports on a potentially significant decision from the U.S. Supreme Court on the second amendment:

The Supreme Court agreed on Monday to hear an appeal to expand gun rights in the United States in a New York case over the right to carry a firearm in public for self-defense.

The case marks the court’s first foray into gun rights since Justice Amy Coney Barrett came on board in October, making a 6-3 conservative majority.

The case probably will be argued in the fall.

► The Child Tax Credit included in the American Recovery Plan — a policy long championed by Colorado Sen. Michael Bennet — is resurrecting the same tired argument from Republicans. As The New York Times reports:

The question of work could be the largest obstacle to reimagining federal support for families. It adds to a growing tension on the right between promoting work and promoting traditional families: While some Republican policymakers, including Senator Mitt Romney of Utah, support a near-universal child credit, others, like Senators Marco Rubio and Mike Lee, believe it should have a work requirement…

“There’s always been a lot of overlap between social and economic conservatives: Two-parent families are better off economically,” said Angela Rachidi, who studies poverty and safety net policies at the American Enterprise Institute. “But the last few years, social conservatives have become more open to using government spending in ways that make economic conservatives uncomfortable.”

Republicans are pushing a familiar narrative that the Child Tax Credit will encourage minority women to refrain from working,

► Congressperson Lauren “Q*Bert” Boebert was in Mar-a-Lago, Florida with her family over the weekend, where she was one of the featured names at a fundraiser for a Republican entity called The House Freedom Fund:

Honored to have my entire family be able to spend time with President Trump. We know our country is better than the socialist path the Dems are taking us down. We know we need to win in 2022 & get back on track. Stay positive & believe. We are going to make good things happen! pic.twitter.com/k2gInKrAtS

► The Washington Post reports on attempts by “establishment” Republicans to protect one of their own, a key battle point in the larger war for the heart of the GOP:

…Cheney leads the smaller faction that views it as a foundation-shaking moment that must be dealt with, hoping to banish Trump to the political sidelines. These Republicans see her reelection as a critical marker for the party’s future.

“It is. She’s a person of character,” said Sen. Mitt Romney (R-Utah), whose PAC has donated two $5,000 checks to Cheney’s reelection.

► You probably won’t be surprised to learn that plenty of Colorado Republicans are still wedded to the idea that the 2020 Presidential election was a fraud.

► Things are going swell in Douglas County, where the Republican county commissioners are locked in an interminable internal struggle.

► President Biden is expected to announce on Tuesday new guidance from the CDC on how and when to wear masks.

► Senate Majority Leader Chuck Schumer says he expects a Senate vote on the “For the People Act” — the big Democratic election reform bill — to take place by August.

► Denver Latinos continue to lag behind on COVID-19 vaccinations despite efforts to focus on these communities.

► As The Denver Post reports, there appears to be no end in sight to the fight between Comcast and Altitude TV that has prevented millions of Coloradans from watching the Denver Nuggets and Colorado Avalanche.

► A vacancy committee selected Andrew Boesenecker as a replacement for State Rep. Jeni Arndt, who recently resigned her position after being elected Mayor of Fort Collins.

► Here’s the real question about Congressperson Lauren “Q*Bert” Boebert (R-ifle): Is she Beavis or Butthead?

Joe Biden seems to be THE master bait & switcher.

He lured in so many people with his fake speeches about unity and bipartisanship.

Then he switched it to extreme socialist policies and a never ending spending spree.

► An anti-masker State Senator from Alaska is barred from flying on Alaska Airlines for refusing to wear a mask in opposition to the company’s COVID-19 protocols. State Sen. Lora Reinbold was also booted from many of her legislative responsibilities in March when a bipartisan group of lawmakers grew tired and wary of her constant refusal to observe health and safety protocols.

The award for Worst Picture went to Mike Lindell’s documentary “Absolute Proof,” which claims that a Chinese cyberattack flipped the 2020 election — despite there being no evidence to back up the claim. Lindell, a vocal supporter of former President Donald Trump, also got a Worst Actor Razzie for the film.

Giuliani’s awkward appearance in “Borat Subsequent Moviefilm” left many wondering if he was in on the joke after he was caught on camera with his hand down his pants during a spoof interview — he said he was tucking in his shirt. The former Trump lawyer won the Razzie for Worst Supporting Actor. Giuliani and his pants zipper were also recognized as the Worst Screen Combo.

► Colorado Democrats are pushing for an end to the Senate filibuster.