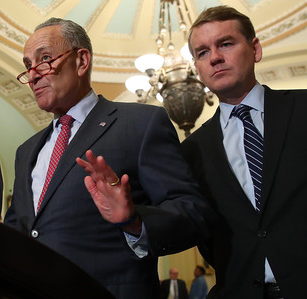 Crow admitted he’s not an expected champion for ending the filibuster, given the purple congressional district that he represents, but the second term lawmaker said he has had enough of seeing “bill after bill after bill” pass the Democratic-controlled House, only to die in the Senate…

Colorado Reps. Joe Neguse and Ed Perlmutter also signed onto the letter. Neguse highlighted bills around voting rights and gun safety that the House passed, but went nowhere in the Republican-controlled Senate last session and look to be stalled this year because the Democratic-controlled Senate cannot get past that 60-vote barrier.

“Our constituents are tired of excuses. They are tired of inaction. They expect the Senate to do its job,” Neguse said. “It’s time for the Senate to get it together and take action and start legislating for the benefit of the American people.”

In the U.S. Senate, of course, the so-far intractable opposition of Democratic Sen. Joe Manchin of West Virginia to eliminating the legislative filibuster is a problem for which no solution has yet emerged. Among Colorado’s two Democratic Senators, Michael Bennet is by far the most vocal proponent of changing the rules to get legislation passed, citing his decade of experience in the Senate watching good bills die on the vine.

The situation will come to a head, and Senate Democrats who are standing in the way of the Democratic agenda arriving on President Joe Biden’s desk will have to make a choice. That choice will have a major impact–materially, and also politically on Democratic performance in the 2022 midterms.

Local Democrats should be thankful for Bennet, encouraging John Hickenlooper to do the right thing when the time comes, and reciting the Alcoholics Anomymous serenity prayer for the Joe Manchins they cannot change.