Get More Smarter on Friday (March 19) 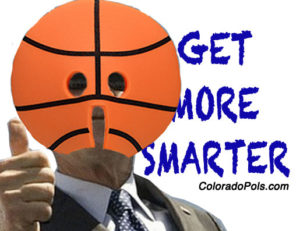 Good news, hoop heads: The NCAA Men’s basketball tournament is back after a one year COVID-19 absence. Let’s Get More Smarter; if you think we missed something important, please include the link in the comments below (here’s a good example). If you are more of an audio learner, check out The Get More Smarter Podcast. And don’t forget to find us on Facebook and Twitter.

► The public option bill is in the House (and, also, the Senate). From Colorado Newsline:

A group of Colorado Democrats officially introduced legislation that would potentially create the Colorado Option: a lower-cost, nonprofit-managed health insurance plan sold on the individual and small group markets that all providers would be required to accept.

Under the legislation, the Colorado Option would only become available — starting in 2025 — if private insurance carriers failed to reduce premiums by 20% over two years for standard individual and small group plans sold on the state’s exchange.

The public option would be carried by a quasi-governmental nonprofit entity called the Colorado Option Authority, set up by the state and managed by a board of directors. Individual and small group plans carried by the authority would have to achieve a 20% cut in premiums as compared with 2021 rates, and all health care providers in the state would be required to accept the plans.

The health care industry is all fired up in opposition to this, which should tell you everything you need to know about which side to be on.

► House Minority Leader Hugh McKean (R-Loveland) is about four months into his job. It’s not going well. McKean appears to be in over his head at the State Capitol.

Now, let’s catch up on more news from the Colorado legislature:

The Denver Post, The Colorado Sun, and Colorado Public Radio have more on the unveiling of a public option plan.

Colorado Newsline looks at the progress of legislation that would improve wages and working conditions for farm workers.

A proposal to put a fence around parts of the State Capitol continues to draw opposition from former Colorado leaders.

► Now that Colorado’s Independent Redistricting Commissions have been selected, it’s time to get to work on those new maps…maybe. As The Colorado Sun reports in its “Unaffiliated” newsletter:

This week, Gov. Jared Polis, the Democratic and Republican leaders of the Colorado General Assembly, and the co-chairs of the campaign for Amendments Y and Z urged the congressional commission to push ahead using population estimates from 2019. There are, however, questions about the legality of doing so.

Jeremiah Barry, a legislative attorney and legal counsel for the congressional redistricting commission, said he isn’t opposed to using the estimated data to get the commission’s work started, but he thinks the Colorado Supreme Court should be asked first if that’s OK.

State lawmakers are now planning to do just that, said Senate Majority Leader Steve Fenberg, a Boulder Democrat. Initially, legislative leaders were going to ask the Colorado Supreme Court to push back September and December map-drawing deadlines placed in the Colorado Constitution when voters passed Amendments Y and Z in 2018. That’s no longer in the cards.

The redistricting commissions should be able to start working on maps based on 2018 Census data, at the very least.

► Colorado is doing a great job of vaccinating adults over the age of 65. We aren’t doing quite so well with everyone else. The last subgroup to become eligible for the COVID-19 vaccine is activated today; the next step is to open up eligibility for all Coloradans.

President Biden, meanwhile, says the U.S. should hit his goal of 100 million COVID-19 vaccinations in his first 100 days by today — 40 days ahead of schedule.

► Colorado Sen. Michael Bennet (D-Denver) has always been a big fan of longstanding Senate norms and practices, but he appears to have reached a breaking point on the filibuster.

As Chris Cillizza explains for CNN, Kentucky Republican Sen. Rand Paul is not a real doctor — no matter how much he pretends otherwise:

Rand Paul is a Republican senator from Kentucky. He is also an ophthalmologist. What he is not is an infectious disease expert.

Which is what makes Paul’s repeated attempts to discredit Dr. Anthony Fauci, who has run the infectious disease operation at the National Institutes of Health since the 1980s, all the more puzzling.

Paul had repeatedly antagonized Fauci during congressional hearings on the United States’ response to the Covid-19 pandemic. Last September, he raised questions about whether the mitigation policies championed by Fauci even work. (The data says they do.) On Thursday, Paul was at it again — questioning Fauci’s claims that people who have already had the virus or have had the Covid-19 vaccine should be wearing masks, and suggesting that those who do, like Fauci, are engaging in “theater.” (The CDC had advised vaccinated people to continue to wear masks because they could have the virus still present and pass it to other non-vaccinated people. They also could be vulnerable to other strains of the virus.)

Paul, never one to back down when facts dispute his beliefs, doubled down on his erroneous claims during an interview with “Fox & Friends” on Friday morning.

► Colorado Newsline reports on the passage of important immigration bills in the House of Representatives that came despite — stop us if you’ve heard this before — blind Republican opposition:

Overall, nine Republicans supported the measure giving a path to citizenship to immigrants protected under the Deferred Action for Childhood Arrivals program, compared to seven who voted in favor of the measure in 2019. It passed 228-197.

However, rather than reflecting new broad support in the congressional GOP for this policy, the uptick is likely attributable to more Republicans holding swing district seats after sweeping the November elections.

For instance, Florida Reps. María Elvira Salazar and Carlos Gimenez, who beat Democrats Donna Shalala and Debbie Mucarsel-Powell, respectively, were new lawmakers to vote for the Dreamer bill. So was Rep. David Valadao, a Californian in his fourth term.

► Former Congressman Tom Tancredo and blowhard talk radio host Peter Boyles say that former Republican Sen. Cory Gardner could have won re-election in 2020 if only he had done more to disparage immigrants.

► The Washington Post reports on some (not at all) shocking news:

► As Denver7 reports, Colorado farmers of color are very happy with the help they are receiving through the American Recovery Plan.

► As Ernest Luning writes for the publication formerly known as the Colorado Statesman, the races for State Party leadership positions for Democrats and Republicans could not be more different.

► Colorado has joined with the federal government in extending tax filing deadlines this year to mid-May.

► Unemployment filings in Colorado are flattening out.

“And you’re saying it will be really difficult to imagine a Senate where business grinds to a halt because you’re making it difficult to get things through?”

Mitch McConnell said that yes, he was.

The laughter started up again, and Mitch McConnell waited for it to finish. “I’m sorry,” the voice went on, “it’s just — you have seen the Senate lately, yes? Or wait, are you a time traveler? That would explain it.”

► You know, because ALL immigrants are gang members:

Breaking 🚨 Democrats just voted to give gang members benefits, including a pathway to citizenship, instead of prioritizing them for removal from our country. Unbelievable!

► Would you be surprised if we told you that South Carolina Republican Sen. Lindsey Graham was talking out of both sides of his mouth? Of course you wouldn’t.

► A wax museum in San Antonio removed a statue of former President Trump because visitors kept punching it in the face.

► Congressman Lauren “Q*Bert” Boebert (R-ifle) should make all Coloradans proud…so long as those Coloradans have no concept of the word “pride.”

► Georgia Democratic Sen. Raphael Warnock delivered his first speech on the Senate floor this week. It was impressive.

► Check out the latest episode of The Get More Smarter Podcast and our new feature, “Legislating With Crayons.”