Audio: At the End of an Interview, Gessler Requests That His Recorded Comments Be Kept Secret 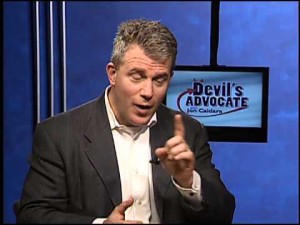 Scott Gessler, a candidate to lead the Colorado Republican Party, recently bragged about how media savvy he is, claiming credit for getting Colorado Public Radio to run a story critical of a top Colorado Democrat.

But last week, he made a media-relations mistake widely regarded as amateur: After conducting an interview with ultra-conservative blogger Holly Casan, he asked that she keep the recording of his comments under wraps.

Gessler’s comments came at the end of his interview with Casan, directly after she had complimented Gessler on his “candor.”

“Listen, Scott, thank you for your candor, and you really clarified a lot of things for me and my readers,” Casan tells Gessler in the recorded segment posted on her website. “I think it was super helpful to hear it from you in long form, so that, you know, we were able to air out the details in long form. And I just think that’s really valuable. And I really appreciate you taking the time.”

Casan agreed to Gessler’s request but nonetheless published a transcript of her Gessler interview with a little bit of audio on her website, which is called “The Real Scott Gessler.”

Gessler is a former Colorado Secretary of State and former candidate for governor with tons of media experience. He even indicated in his Casan interview that you normally lay out the rules for an interview, if any, before it takes place, not after.

So Gessler’s unusual request to can the audio recording led his critics to speculate that he was so concerned about what he’d said during his recorded conversation with Casan that he wanted it buried.

The website states that the email is Gessler’s, and it’s replete with F-bombs, volcanic eruptions, and more.

The Colorado Times Recorder was able to reach the former secretary of state by phone, but he didn’t want to talk about any topic.

Casan, who didn’t return an email seeking comment, is connected to the U.S. Election Integrity Project (USEIP), a Colorado-based group that supports both QAnon and election fraud conspiracies.

Gessler, a lawyer who’s seen as the GOP establishment figure in race to lead the Republican Party in Colorado, is facing pressure from people like Casan, who’s crusading against voting measures widely deemed safe, and also from prominent Republicans, who are likely trying to push Gessler to denounce extreme and baseless claims, which are seen as crazy by many outside fringe GOP circles.