Get More Smarter on Wednesday (March 17) 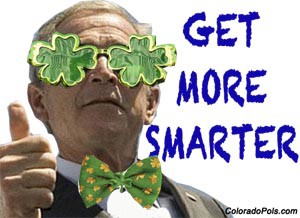 Happy St. Patrick’s Day! It’s too cold and virus-y to get black out drunk. Let’s Get More Smarter; if you think we missed something important, please include the link in the comments below (here’s a good example). If you are more of an audio learner, check out The Get More Smarter Podcast. And don’t forget to find us on Facebook and Twitter.

► Republican Attorneys General are threatening to sue the federal government for providing stimulus funds to state and local governments. As The Washington Post explains:

Twenty-one Republican state attorneys general on Tuesday threatened to take action against the Biden administration over its new $1.9 trillion coronavirus stimulus law, decrying it for imposing “unprecedented and unconstitutional” limits on their states’ ability to lower taxes.

The letter marks one of the first major political and legal salvos against the relief package since President Biden signed it last week — evincing the sustained Republican opposition that the White House faces as it implements the signature element of the president’s economic policy agenda.

The attorneys general take issue with a $350 billion pot of money set aside under the stimulus, known as the American Rescue Plan, to help cash-strapped cities, counties and states pay for the costs of the pandemic. Congressional lawmakers opted to restrict states from tapping these federal dollars to finance local tax cuts.

How dare the federal government make it harder for states to take things away from people! Republicans will do everything in their power to stop you from getting help…and that’s a really weird political strategy.

Republicans would do well to take the advice of former GOP Congressman and gubernatorial candidate Bob Beauprez. As POLITICO reports, some Republicans are finally seeing how much they screwed up here by focusing their attention on Dr. Seuss and genderless Potato Head toys:

…in conservative circles, a feeling of missed opportunity has taken root in the wake of the passage of the Covid-relief bill last week. Republicans were never expected to support the measure and unanimously opposed it when the time came for a vote. But in interviews with top GOP operatives, Trump confidantes, and congressional aides, there was a common refrain that the party could have done more to frame it for the public. Instead, periodic claims that the bill was bloated with progressive add-ons and bailout money for blue states were overshadowed by a more relentless focus on the culture wars du jour…

…None of the attack lines seemed to resonate with voters, who began receiving stimulus checks as early as last weekend and appear overwhelmingly supportive of the law. A CBS-YouGov survey released on Sunday showed 71 percent of adults believe the American Rescue Plan will benefit the middle class more than wealthy Americans. The bill’s passage coincides with an uptick in vaccinations and recognition from Democrats and allied teachers unions that schools need to reopen soon — which together have the potential for improving the electoral landscape for Democrats as they try to keep both chambers of the Congress.

► As CNN reports, there is an obvious similarity with Russian election interference efforts and Republican proposals to roll back voting rights:

A new US intelligence report that finds Russia interfered in the 2020 election to help Donald Trump and hurt Joe Biden also underscores a fundamental truth: The gravest threat to US democracy comes from within.

The report, released by Director of National Intelligence Avril Haines, finds that Moscow sought to inject misleading information about Biden into the campaign through officials and others close to Trump.

The real bombshell it contains is not the confidence of the spy agencies that Russia hoped to subvert American democracy. It is that US intelligence experts effectively confirmed that for the second election in a row, Trump acolytes repeatedly used, knowingly or otherwise, misinformation produced by the spies of one of America’s most sworn foreign adversaries to try to win a US election. [Pols emphasis]

Some Republicans will no doubt decry any comparisons to Russian election meddling, but they’re clearly on the same side of this fight.

► Keep wearing those masks, people! COVID-related hospitalizations are rising in Colorado, as The Denver Post reports. Meanwhile, more mass vaccination sites are opening around the state.

► Let’s get you caught up on the Colorado legislature…

Governor Jared Polis signed a bill that suspends standardized testing for certain grades in Colorado on account of COVID-19. Another bill to restructure CMAS assessments is winding its way through the legislature.

A bill that seeks to slow the increase of prescription drug prices is expected to be opposed by the pharmaceutical industry…which tells you pretty much everything you need to know.

The Colorado Springs Independent summarizes some new and pending laws in Colorado.

Democrats are working on legislation to enhance protections for agricultural workers.

A couple of Georgia businesses have already perked up. After the state’s Chamber of Commerce came out against anti-voting legislation, Coca-Cola and Home Depot said they were “aligned” with the Chamber, The Post reports. Other businesses have been quiet because they “don’t want to alienate their traditional allies in the Republican caucus.”

The response from voting advocates is simple: Tough. Democracy is not an issue on which any responsible corporate citizen can remain quiet. Georgians of all races will continue to hold businesses’ feet to the fire, implicitly threatening a devastating blow to these firms in a state with a substantial African American population.

► The final members of the Colorado Independent Legislative Redistricting Commission have been selected.

► California Gov. Gavin Newsom would be happy to hold the door if octogenarian Sen. Dianne Feinstein would be interested in exiting the building.

Elsewhere, today is the deadline for signatures to be submitted in an effort to recall Newsom.

► A board of education meeting in Grand Junction was adjourned because one attendee refused to wear a mask after repeated requests. 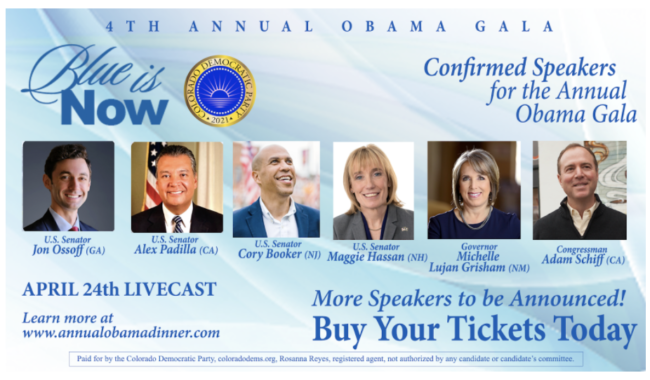 And there will be much speechifying.

► As The Washington Post reports, President Biden supports a filibuster reform that would require Senators to actually filibuster if they want to block certain legislation.

Senate Majority Whip Dick Durbin, the #2 Democrat in the Senate, is also on board with changing the filibuster.

► Voter registration numbers in Colorado are not looking good for Republicans in 2022.

► As Ian Silverii writes for The Denver Post, the COVID-19 pandemic exposed significant economic inequalities in Colorado and around the country.

► A new study from The New York Times looks at “partisan segregation” in cities and other population centers around the country.

“I didn’t ask for this color!” shouts GOP Rep. Rod Bockenfeld, offended by references to white supremacy on the House floor. The speaker intervenes and Bockenfeld steps off.

► As a publicity stunt, the great meat war has proven successful.

► It only gets dumber.

► As Jesse Paul reports for The Colorado Sun, the road to becoming the next Chair of the Colorado Republican Party remains paved with election fraud nonsense.

► Denver7 reports on the search for new superintendents in five Colorado school districts.

While the media hyperventilates over non-issues, they’ve decidedly ignored that leftists have set up an autonomous zone – an ACTIVE insurrection – in Minneapolis for the George Floyd trial.

They ignored the insurrection in Georgia & Seattle too.

I’m starting to sense a pattern.

► Republicans are going to lose their shit over this.

► The Onion weighs in on the killing of eight people in a series of shootings in Atlanta on Tuesday:

► The Senate made history in approving Deb Haaland as Interior Secretary. So what comes next for the Bureau of Land Management HQ?

► Check out the latest episode of The Get More Smarter Podcast and our new feature, “Legislating With Crayons.”