Last week the House of Representatives gave final approval to The American Rescue Plan (ARP), a $1.9 trillion stimulus package that President Biden promptly signed into law. The ARP contains all kinds of helpful things for Americans of all political backgrounds, including $1,400 direct payments to families; extended unemployment benefits; the expansion of child tax credits that could cut child poverty by 50%; much-needed relief for state and local governments; and new money to help schools reopen as quickly as possible.

Not one Republican in either chamber of Congress voted in support of the ARP. Congresswoman Lauren “Q*Bert” Boebert (R-ifle) spoke for Colorado Republicans in opposition to the bill, rattling off a bunch of debunked facts and figures as part of her rudderless attack on what has proven to be one of the most popular pieces of legislation in modern American history. Just this week, Boebert tried out another attack on the legislation that made absolutely no sense whatsoever.

Republicans are having a hard time making a logical argument against the ARP, for obvious reasons. As James Downie writes for The Washington Post:

The just-passed stimulus package is a rarity in today’s Washington: a major new law that’s a win in terms of both politics and policy. Poll after poll shows overwhelming support. As my colleague Greg Sargent notes, the bill is even popular with both lower-income Republicans and non-college Whites, two key components of the Trump-era GOP coalition. Millions of Americans are already receiving desperately needed payments to help the country get back on its feet from a once-in-a-century pandemic. 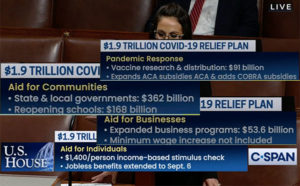 A lack of a coherent message won’t stop Republicans from crapping on a stimulus package that they should have just supported in the first place. But as the right-wing Washington Examiner explains, Republicans might want to listen to former Colorado Congressman and two-time gubernatorial candidate Bob Beauprez’s warning about relentlessly attacking something that people are generally happy about:

Another former Republican congressman, Bob Beauprez of Colorado, refused to call Biden’s spending package a “legislative win” given it wasn’t a bipartisan agreement. But he did echo Heye’s point about what conservatives call irrelevant inclusions in the framework.

“I’m not sure I’d want people to talk about it much more because they might actually find out what’s in it,” he joked. [Pols emphasis]

Beauprez questioned the package’s positive polling — “Free money? That does sound good.” — and the pressure it places on the country’s finances — “buying votes with borrowed money.” But those are more nuanced messages that are harder to convey to the public.

Beauprez may have been a terrible statewide candidate in Colorado, but he’s no dummy: He understands that Republicans have backed themselves into a corner by attacking a stimulus package that is really helpful to base Republican voters. Americans need help NOW, and Democrats are providing that help; Republicans, meanwhile, are hoping that people will overlook this help because they are more concerned about nebulous federal deficits down the road. It’s not a fair fight, and rational Republicans know this.

We can’t believe we’re saying this, but…Republicans should listen to Bob Beauprez.