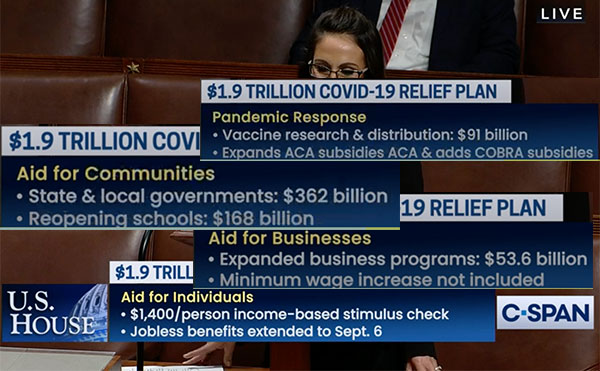 C-SPAN was on point with the chryons during Boebert’s floor speech today.

The House of Representatives today gave final approval to the American Rescue Plan (ARP), President Biden’s $1.9 trillion stimulus bill passed by the Senate last weekend that poll after poll has shown to be one of the most popular pieces of legislation in modern U.S. history. As expected, Colorado’s Congressional delegation voted along partisan lines.

But before today’s scheduled vote (and after unsuccessfully trying to force the House to adjourn at 10:07 am) Republican Members of Congress dialed up the rhetoric on the House floor in opposition to — we’ll say it again — one of the most popular pieces of legislation in modern U.S. history.

Colorado Republicans were represented in Congress by Rep. Lauren “Q*Bert” Boebert (R-ifle), who gave one of her typical “firey” speeches in opposition to whatever it is that Democrats are proposing (Colorado’s other Republican Members of Congress, Reps. Ken Buck and Doug Lamborn, did not speak publicly).

We should also note that this discussion came on the same day that Colorado lawmakers — both Democrats and Republicans — introduced the state version of a COVID stimulus plan.

You can watch Boebert’s full speech after the jump, or read our full transcription and commentary that follows.

And here we go…

COVID relief…ah, Mr. Chairman, here we go again. The left continues to manipulate the English language however it suits their fancy. Lying to the American people about what is really happening in the swamp.

American Rescue Plan? Please. President Biden is dropping bombs before anyone is getting checks.

Since we’re not entirely sure what Boebert is talking about, here are some lyrics from Ice Cube’s classic track, “Check Yo Self”:

Alright, back to Q*Bert:

Relief? Where is the relief for moms and dads trying to return their children to school? This legislation has more funding for Democrat pet projects than it does for getting our kids out from behind the screens and back into the classrooms.

Where is the relief for moms and dads and kids and schools? Um, it’s IN THE BILL. The bill is called “The American Rescue Plan” (ARP). You should read it.

As CNN reported on Saturday:

Both the Senate and House bills would provide nearly $130 billion to K-12 schools to help students return to the classroom. Schools would be allowed to use the money to update their ventilation systems, reduce class sizes to help implement social distancing, buy personal protective equipment and hire support staff. Both bills would require that schools use at least 20% of the money to address learning loss by providing extended days or summer school, for example…

...The bills would also provide about $39 billion to child care providers.

Again, back to Boebert:

Democrats say this money — that hasn’t been, and won’t be spent anytime soon — is urgently needed to safely reopen schools. Bull. Many states have had their schools open for months now.

Yes, some school districts have reopened schools already. Some have not. You cracked the case, Columbo.

By one estimate, state departments of education have between $53 and $63 billion federal funds to reopen that’s unspent [sic].

There are a couple of conservative organizations making this claim, but it’s not something that has been widely reported or accepted as accurate.

This bill has another $130 billion dollars, but only five percent would be spent this school year.

Hold up. You LITERALLY just said, “Where is the relief for moms and dads trying to return their children to school?” It was the first bullet point in your notes.

Democrats should stop using kids’ schooling as a bargaining chip for more money for teachers’ unions. Stop holding our children’s education hostage for your pet projects and your lobbyist friends.

The Senate bill includes $2.75 billion for private schools…which do not have teachers’ unions.

What about our seniors? Where is the relief for those who have suffered under draconian leadership of Cuomo, Whitmer, Newsom?

Look, we’ll give credit where it’s due: “Like cheap drugstore concealer” is a pretty good line.

This is nothing more than a trashy spending spree while doing nothing for those who have suffered the most from this China Virus.

Here Boebert shoe horns “trashy spending spree” and “China Virus” into the same sentence. If Donald Trump could still use Twitter, he would be smashing the ‘LIKE’ button.

With a $1 trillion dollars left previously unspent from previous COVID bills [sic], only nine percent of this bill is going to address COVID-related issues.

Politifact checked this talking point out after Rep. Steve Scalise, a Republican from Louisiana who is the #2 ranking member in the minority, first rolled out it out last month:

His source is the COVID Money Tracker, a project of the Committee for a Responsible Federal Budget, a group focused on reducing federal deficits. The tracker’s latest number shows that out of $4.1 trillion approved by Congress, about $3 trillion has been committed or disbursed.

But in a Jan. 27 blog post, the budget group warned that figuring out how much money remains is complicated. It’s not, they wrote, as though the money is “sitting in budget accounts waiting to be allocated.”

“Much of it is already allocated or scheduled to be spent, and a small portion will never be spent,” they wrote.

A large fraction of the nominally unspent money comes from the Response and Relief Act, passed in late December.

“These funds will take some time to disburse and even more time to appear in the data,” they said.

We should also note that Boebert is kind of an expert on spending money as soon as you get your hands on it.

And it begs the question: Why would Democrats push such a partisan, divisive, and frankly, unhelpful bill? The answer can be found on K-Street, Mr. Speaker, where lobbyists close to Schumer, Pelosi, and Biden are already chilling the bubbly.

Partisan? Yes, this is partisan, but only because no Republicans are supporting the legislation.

Divisive? Not so much. Stop us if you’ve heard this before: The ARP is one of the most popular pieces of legislation in modern American history.

Unhelpful? You’re really going to go with “unhelpful” in describing a $1.9 trillion stimulus package? Up to this point, Boebert has been saying that the COVID stimulus bill is “excessive,” which is not an adjective that you would generally associate with “unhelpful.” Perhaps the best way to explain this logical inconsistency is to remind you that Boebert generally thinks words are dumb.

Mr. Speaker, Americans see why this legislation will be the first COVID bill to receive zero bipartisan support.

Americans know this bill will benefit states and unions that have been poorly mismanaged.

As we’ve noted before in this space, Boebert is attacking HER OWN STATE here.

But on Main Street, the small businesses will continue to suffer. $90 billion dollars to bail out private pension plans.

Hmmm…where do you suppose that people who rely on a pension plan happen to spend their money? If you answered, “At Small Businesses,” then you get to move on to the next square on the board.

$500 billion dollars to states and localities to keep their economies locked down.

Wait, what? We’re going to give $500 billion to state and local governments so that they can…cripple their own economies? We tried to diagram this logic but our hard drive melted.

Less than nine percent of this $1.9 trillion dollars goes to something COVID related.

Last week, Boebert claimed that $414 billion of the ARP would be spent on abortions. That would be enough money for every woman in America to have 10 abortions. Boebert’s math here is…not good.

If conservatives were in charge, you would see a limited, targeted relief plan, while enabling businesses and schools to remain open, and reigniting our economy.

You mean, like, when “conservatives” were in charge of the White House and the U.S. Senate in 2020 as the COVID pandemic raged across the country? Boebert is correct on one point: If conservatives were in charge, we definitely wouldn’t be paying for every woman in America to have 10 abortions.

Look at businesses and schools…excuse me…look at Florida and Texas, who have led the way.

“We should be more like Florida and Texas,” said no health expert ever.

Only California and New York can compete with the COVID infection and death rates we’re seeing out of Florida and Texas. California has 10 million more residents than Texas, but only 10,000 more deaths.

Never forget, these jobs are essential, and the best stimulus plan is to reopen.

Which jobs? Florida and Texas jobs? What are you talking about?

And with that, I yield. Thank you.