Impeachment 2.0 has taken up all of the political oxygen this week, moving President Biden’s COVID relief bill to the sideline temporarily. But a bevy of new information shows that Republican opposition to the $1.9 trillion relief bill is wildly out of touch with the rest of America.

The first major legislation of Joe Biden’s presidency will be the covid-19 relief bill, which has engendered a good bit of controversy in Washington over its size, whether it sends aid to the right people and whether the process by which it will pass is sufficiently bipartisan. Given that controversy, you might think the matter is contentious among voters, generating argument, discord and eventually hurt feelings among those who don’t wind up getting their way.

But it isn’t. In fact, this bill so far looks to be one of the most popular pieces of major legislation in U.S. history. [Pols emphasis]

That in itself doesn’t prove it’s a good thing — the public sometimes supports bad ideas — but it should give Democrats confidence that the political winds are at their backs no matter what Republicans do or say. It also shows how skewed the view from Washington can sometimes be. 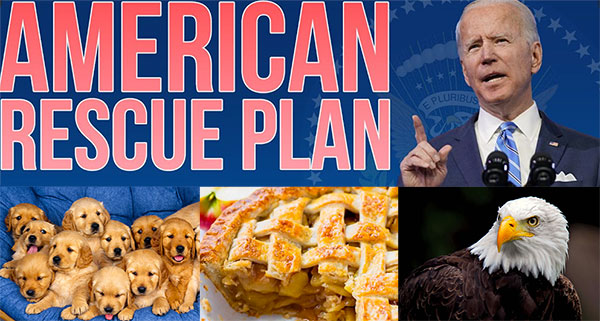 Things that are popular in the United States.

The numbers in support of this claim are pretty hard to dispute. Polling from CBS News shows that 83% of Americans approve passing a big stimulus bill. Quinnipiac University found that 68% of Americans support Biden’s $1.9 trillion plan, as do 63% of small business owners.

Of all 20 policies covered by the poll, the two most popular were the ones at the center of Biden’s current COVID proposal: $2,000 relief checks (74 percent favor vs. 13 percent oppose) and increased federal funding for vaccination (69 percent favor vs. 17 percent oppose). A full 58 percent of Americans also support raising the federal minimum wage to $15 an hour, another key element of Biden’s COVID-19 rescue package. That’s almost twice the share of Americans (31 percent) who oppose a wage hike.

Democrats can (and likely will) pass the full $1.9 trillion plan without support from Republicans…not that the GOP hasn’t tried. As Waldman notes:

It isn’t that Republicans haven’t tried to discredit the bill — they have — but their efforts have been desultory and ineffectual. They’ve complained about its overall size, and that too many people may be helped, and that assistance to state and local governments may flow to places where there are lots of Democrats. But none of those arguments seems to persuade anyone.

As we noted last week, Democrats seem to have learned some important lessons from the last time they controlled Congress and the White House. Republicans can complain all they want about “bipartisanship” and “unity,” but the American people just want some help, and they elected Democrats to get it done.