In Which Cory Gardner Makes You Glad He’s Gone 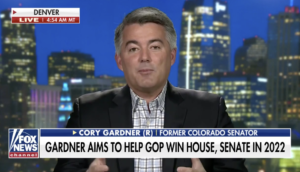 Former Colorado Senator Cory Gardner was a guest on “Fox and Friends” on Wednesday morning to discuss his new career venture running a SuperPAC for Republican candidates.

But before Gardner discussed his new fundraising job, talking muppet Ainsley Earhardt asked Gardner to comment on Tuesday’s opening hearings in the second impeachment trial against President Trump. If you thought perhaps that Gardner would be less “used car salesman-like” now that he is no longer in elected office, then you’ll be disappointed:

EARHARDT: Good morning. What did you think about what happened yesterday and what can we expect going forward?

GARDNER: Like most Americans yesterday I was working and wasn’t glued to live television processies [sic]. Reading the aftermath of yesterday it sounds like there was a video presentation made for TV, is how it was described.

You know, I would remind people that there is no “made for TV” provision of the Constitution. And so, this is a trial taking place in spite of the fact that the new President says he wants unity. An impeachment trial to remove someone from office who is out of office, following cries and calls for unity in a city that is now seeing an impeachment trial and a partisan COVID-19 relief measure. And so, I really think you’re seeing Washington again completely at odds with the rhetoric that is coming out of its leadership.

Gardner has never publicly commented on Trump’s claims that the 2020 Presidential election was fraudulent. When he was asked in mid-November about whether he considered Joe Biden to be the President-elect, Gardner responded by saying, “I’m not going to play your gotcha questions.” Gardner didn’t address Trump’s election lies in his farewell speech on the Senate floor in December. To our knowledge, Gardner has also never publicly commented about the terrorist attack on the U.S. Capitol on January 6 (he was no longer in the Senate at that point).

In his brief interview today, Gardner affirmed all of the criticism about him as a dishonest, snake oil salesman of a politician, framing the impeachment of Trump for inciting an insurrection as little more than a mean thing Democrats are doing (while also tossing in a weird attack on Democrats for trying to pass a COVID-19 stimulus package). This is why Gardner lost his re-election bid in November by a 9 point margin to John Hickenlooper.

Gardner was always a mealy-mouthed huckster who, for a brief time, managed to fool enough Colorado voters into believing there was some actual substance behind his cherubic grin. That old saying, “you don’t know what you’ve got until it’s gone” doesn’t apply here; we know what we had, and we’re thrilled that we don’t have it anymore.