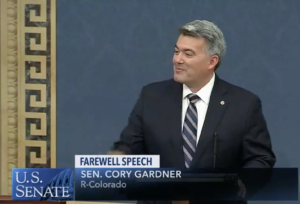 To understand the brazen hypocrisy of Gardner’s speech, you need to know that Gardner has steadfastly refused to acknowledge that Democrat Joe Biden defeated President Trump in the 2020 election. Gardner did not respond to some pretty basic questions from The Washington Post last week about the election outcome. On November 17, Gardner snapped at a reporter who asked if he considered Biden to be the President-elect:

Asking a U.S. Senator if he recognizes the winner of the 2020 election as the President-elect is a “gotcha question”?

GARDNER: Ten years ago, I sat on the floor of the United States House of Representatives as we prepared — some of my colleagues here with me — to be sworn in to the 112th Congress. I watched with our daughter Allison patiently sitting by my side as the peaceful transition of power took place. The hallmark of our Republic. As the most powerful Constitutionally-prescribed Member of Congress, the Speaker of the House, gave the gavel to a newly elected Speaker, without gunshot or war, peacefully transitioning to a new majority.

Today I speak on the Senate floor with a heart of gratitude, that as I leave, with a new Congress set to begin, I go home not because of or due to the threat of violence or revolution, but because of that same Constitutional governess that has give this country over two centuries of strength and certainty. A jewel among nations, exceptionally blessed by God.

The irony of Gardner’s words was not lost on others, including Justin Wingerter of The Denver Post.

In many ways, Gardner’s farewell speech was a good summation of his time in the U.S. Senate, where his motto seemed to be, “Do as I say, not as I do.” Gardner went on and on about the importance of ideals that he himself refuses to demonstrate:

All of us here in the Senate — the American people, all of us — are responsible for the starting point that we hand off to the next generation. And we have a moral obligation to make it the best starting point possible.

Apparently everyone else has this “moral obligation,” since Gardner will not allow a Democratic President this same courtesy.

Here is the same Sen. Gardner who regularly lied about important issues, including his support for protecting pre-existing medical conditions, decrying the celebration of political tactics over legitimate leadership:

…We cannot govern when every tactic and detail is elevated to the status of principle. There is no compromise with this approach.

This nonsense reminds us of what The Denver Post editorial board famously opined in March 2019:

We endorsed Sen. Cory Gardner in 2014 because we believed he’d be a statesman. We knew he’d be a conservative voice in Congress, to be certain, but we thought his voice would bring “fresh leadership, energy and ideas.”

We see now that was a mistake – consider this our resolution of disapproval.

Gardner fooled Colorado voters into electing him to the Senate in 2014 by pretending to be something he was not. It is fitting, then, that he would end his Senate career committed to the same misdirection. Goodbye and good riddance.