UPDATE (MONDAY): Gardner’s pre-existing medical conditions ad is so dishonest that even CBS4 Denver political reporter Shaun Boyd didn’t have anything nice to say (Boyd is well-known in Colorado political circles for her eagerness to toss softball after softball toward Gardner). From a CBS4 “Reality Check”:

There is maybe no provision of the Affordable Care Act that is more popular than protections for people with pre-existing conditions. And that has created a predicament for Republicans like Senator Cory Gardner who has voted repeatedly to repeal the law…

…This ad is meant to convince you Cory Gardner is sincere about his promise to protect people with preexisting conditions… Problem is, unlike the protections in the law he wants to repeal, his protections don’t go far enough.

Politifact is out with a new fact check on legislation being promoted by Senator Cory Gardner’s campaign that has already been blown to bits by local fact checkers.

Despite spending his entire career railing (and voting) against the Affordable Care Act (ACA), Gardner is campaigning on a 117-word bill that he introduced in late July that is intended to give the impression that he is doing something serious about protecting pre-existing medical conditions. The reason is simple: Protecting pre-existing medical conditions is popular with voters, and Gardner is not.

Rather than concentrate on a TV spot from Gardner’s campaign about his legislation regarding pre-existing medical conditions, Politifact instead skips straight to the meat of the discussion: Does Gardner’s bill do what he says it would do?

A campaign spokesperson reiterated in an email that Gardner’s goal is “to guarantee coverage for individuals with preexisting conditions and ensure they cannot be charged more as a result of their underlying medical conditions.”

Thomas Miller, a resident fellow at the American Enterprise Institute, a think tank in Washington, D.C., quipped that the main goal might be something else entirely.

“It’s probably about 100 words too long,” Miller said. “It could have said, ‘I’m running for election. I’ll do whatever is necessary.’” [Pols emphasis] 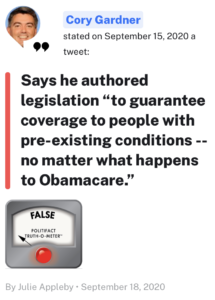 Politifact’s ultimate ruling is consistent with what other news outlets have discovered: Gardner’s bill is crap.

Because protecting people with medical conditions requires many moving parts, the brevity of Gardner’s proposal makes it appear to be a fig leaf for a political problem rather than a means to guarantee protections for people with preexisting conditions. [Pols emphasis]

The legislation is unclear on whether it guarantees that people with health problems will be able to buy insurance in the first place. And, even if they can, they may well find it priced out of reach because the legislation does not bar insurers from varying premiums widely on the basis of age, gender or occupation.

Viewed in its most favorable light, Gardner’s 117-word proposal would only serve as a place holder for larger legislation, upon which more protections would have to be layered to bolster the effectiveness of its guarantee.

In an effort to defend Gardner, his campaign spokespeople have been working really hard to move the goalposts in describing “things that are true.” A spokesperson tells Politifact above that Gardner’s “goal” is to “guarantee coverage for individuals with preexisting conditions and ensure they cannot be charged more as a result of their underlying medical conditions.” That’s a cute bit of wordplay about a “goal” that skips past the fact that this is not what Gardner’s legislation would actually accomplish.

Responding to a Fox 31 News “truth check“, a Gardner spokesperson said, “Insurers would be required to take on and cover individuals with pre-existing conditions no matter what happens to Obamacare.” That’s not what health policy experts say. But our favorite Gardner campaign narrative came in response to a 9News “Truth Test” about his pre-existing conditions TV spot:

In an email, Gardner’s campaign spokeswoman defended the bill.

“One thing is 100% true: Cory Gardner authored the bill and he says it guarantees coverage, which means insurers would be required to cover and take on individuals with pre-existing conditions,” wrote spokeswoman Meghan Graf.

Here’s one more thing that is true: Gardner’s pre-existing medical conditions stunt is not working.