UPDATE: It’s worth noting that this is not a new phenomenon. As Justin Wingerter reported for The Denver Post on November 23:

In the nearly three weeks since Biden defeated Trump, none of the state’s four congressional Republicans have acknowledged Trump’s defeat or signaled support for his wild claims of widespread election fraud. On Monday, spokespeople for the four declined to comment when asked if Trump should concede. 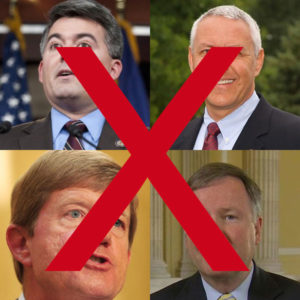 Life is full of unanswerable questions. “Who won the 2020 Presidential Election?” is not among them.

Nevertheless, The Washington Post devoted what we imagine was a considerable amount of time into surveying every Republican Member of Congress — all 249 of them — about the results of last month’s election. The Post mostly got a bunch of non-responses and was thus forced to research other public comments from Republicans. All told, only 27 GOP lawmakers acknowledged that Democrat Joe Biden is the President-elect. Two Republicans, Rep. Mo Brooks of Alabama and Rep. Paul Gosar of Arizona, actually maintain that Donald Trump won the 2020 election.

All told, 88% of Congressional Republicans REFUSE TO OFFER AN OPINION on the winner of the 2020 election. That percentage is even more dismal among Colorado’s GOP delegation, which is 100% united in silence. No member of Colorado’s Republican delegation even bothered to respond to questions about the election outcome. Not Sen. Cory Gardner, not Rep. Scott Tipton, not Rep. Ken Buck, nor Rep. Doug Lamborn.

And these were not difficult questions: 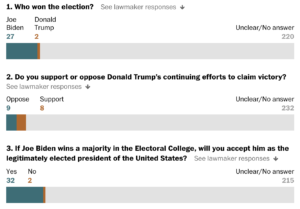 The last question and non-answer is particularly absurd. Most Republicans won’t even say if they would accept Biden as President of the United States once members of the Electoral College cast their ballots. How about after Biden is inaugurated on January 20, 2021? Or when Biden is literally sitting in front of the Resolute desk in the Oval Office of the White House?

As Chris Cillizza writes for CNN, this is beyond ludicrous:

Saying that we need to consider both sides of this argument equally is an utter farce. It’s as though one side is arguing that 2 +2 = 4 and the other side is saying that 2+ 2 = 5, and we have to act as though both arguments are equally valid.

We are fortunate that the outcome of the Presidential election does not depend on the opinion of Doug Lamborn, but there are other important factors at play in this discussion. Cillizza goes on to make a point that should not — must not — be dismissed as simple partisan politics:

Because if some decent chunk of the population is so convinced — facts be damned — that Trump won and the election was stolen from him, it leads to events like we saw in Michigan on Saturday night: A group of armed protesters surrounded the home of Democratic Michigan Secretary of State Jocelyn Benson demanding that she “stop the steal” of the election from the President.

Donald Trump’s poisonous impact on America is undebatable, but let’s not forget the importance of Trump’s enablers. Republicans don’t have to mimic Trump’s unfound allegations about widespread voter fraud in order to weaken democracy and foment violence. By remaining silent, they are admitting that avoiding a mean Tweet from Trump is more important to them than preventing real people from getting hurt.

Shame on Cory Gardner. Shame on Scott Tipton. Shame on Ken Buck. Shame on Doug Lamborn. May their cowardice never be forgotten.