Cory Gardner is a Bad Example 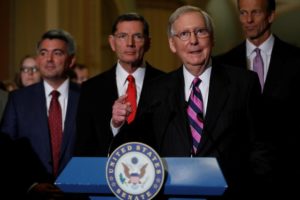 “The electoral college has spoken, so today I want to congratulate President-elect Joe Biden,” said McConnell (R-Ky.). He also nodded to the historic elevation of his Senate colleague, Kamala D. Harris (D-Calif.), to the vice presidency.

McConnell’s statement comes after some of his Senate colleagues strained to avoid saying the same thing Monday. The No. 3 Senate Republican, John Barrasso (R-Wyo.), called questions about the matter “gotcha” questions.

Chris Cillizza follows up for CNN on Barrasso’s ridiculous comment:

After the Electoral College — as expected — confirmed Monday that Joe Biden will be the 46th president of the United States, a reporter asked Wyoming Sen. John Barrasso whether or not Biden was now officially the “President-elect.” Barrasso called it a “gotcha” question.

How was asking whether Biden is President-elect a “gotcha” question, you ask? “I know what the Constitution says, Article 2, Section 1. And I know that the Electoral College has voted today, so to me, that tells us a lot … I follow the Constitution,” Barrasso, the third ranking member of Republican Senate leadership, explained. “Three weeks ago the transition occurred in terms of … access to the briefings and access to the money.”

It’s possible that Barrasso was following the example set by Sen. Cory Gardner (R-Yuma), who used this same lame excuse for an answer back in November:

Sen. Cory Gardner (R-Colo.) when asked if he considers Joe Biden the president-elect:

The lesson, as always: Don’t be like Cory Gardner.