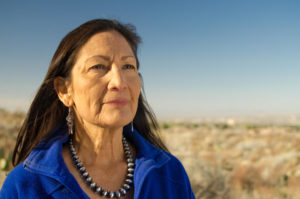 As the Grand Junction Sentinel’s Dennis Webb reports, Rep. Deb Haaland of New Mexico has been confirmed by the U.S. Senate to be the next Secretary of the Interior, elevating a 35th generation Pueblo Native American to the highest authority over the nation’s land use policies short of the President himself. It’s an historic moment.

A big backlog of thorny issues awaits Haaland as she settles into this crucially important leadership role over the American West, not least the fate of the highly controversial move of the Bureau of Land Management (known since 2020 as the “other BLM”) from its former headquarters in Washington, D.C. to Grand Junction, Colorado during the previous administration:

Haaland…previously has criticized the Trump administration’s relocation of the BLM’s headquarters from Washington to Grand Junction. The agency moved 41 largely top-level jobs to the city, and many more from Washington to other locations in the West. Hickenlooper and Bennet support having what they call a fully functioning headquarters in Grand Junction but say the Trump administration didn’t follow through on its commitment to the city by moving only 41 jobs there.

Haaland said during her confirmation hearing that she would keep an open dialogue with western senators on the issue and accepted Hickenlooper’s invitation to visit the new headquarters if confirmed. She said it will be important to look at the headquarters issue while first considering the well-being of the career staff there. 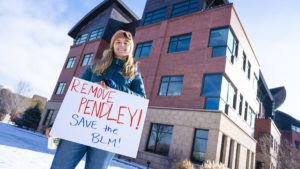 It’s necessary to be honest about this: the issue of the BLM headquarters’ move to Grand Junction has split Colorado’s top Democratic elected officials from many of their colleagues, as well as the bulk of the environmental advocacy community. Environmental groups including local advocacy organizations like the Center for Western Priorities have been clear from the beginning that this move was a terrible idea taking place for all the wrong reasons:

Aaron Weiss, deputy director of the Center for Western Priorities, described the move in blunt terms.

“This headquarters move has just been a total failure,” Weiss said.

Some people would argue that trimming government is not necessarily a bad thing, and supporters of the move have argued that BLM employees unwilling to relocate closer to the lands they manage weren’t a good fit for the agency anyway. But for Weiss, the numbers confirmed his worst fears about the Trump administration’s real motivation.

“The headquarters move was not a move. It was simply an evisceration of the agency,” Weiss said. [Pols emphasis]

In a January statement, Colorado Sens. Michael Bennet and John Hickenlooper reiterated their support for the agency’s move to Grand Junction under President Joe Biden, while making the case that the Trump administration had executed it poorly:

Despite committing to move the BLM headquarters to Grand Junction, the Department of the Interior assigned 41 senior staff positions to Grand Junction, many of which they rushed to fill at the end of 2020. After the scaled-down move was announced, the Grand Junction Daily Sentinel editorial board wrote, “We’re stuck between feeling grateful that Grand Junction will be known as the BLM’s Western Headquarters and frustrated that such a distinction has been hollowed out to its barest impact.”

In a letter to President Joe Biden, the senators touted the benefits of a fully-fledged headquarters on the Western Slope and urged the Biden Administration to work with the bipartisan members of the Colorado Congressional Delegation on the BLM headquarters move.

“We continue to support a full BLM headquarters in Grand Junction. We believe that such an effort must be more than symbolic and must include the staff and resources to improve management and protect our public land,” wrote the senators. “A full headquarters in Colorado would not only grow the Western Colorado economy, but also send an important signal that rural America is an appropriate place for such a prestigious institution.”

There are a few important considerations that help inform the debate over the future of the BLM in Grand Junction. First and foremost, there’s a recognition that the new administration will not be continuing the Trump administration’s heedlessly pro-extraction management of America’s public lands regardless of where the headquarters is located. There’s no reason to presume nefarious intent from Sens. Bennet and Hickenlooper or other local Democratic boosters of the BLM in Grand Junction, who may well have a point about the devil being in the details. Moving some employees against their will while scattering more throughout the West, and moving the agency to a building literally shared with oil and gas companies, are decisions the Trump administration made that could cast the entire plan in an unfavorable light.

With that said, the troubled execution of this move under President Donald Trump and former love-to-hate acting BLM director William Perry Pendley could simply constitute an unsalvageable failure at this point. Coloradans should be prepared for the possibility that the Biden administration will reverse the BLM’s move to Grand Junction, and given how this move has gone so far that cannot be considered a great loss.

It’s the policy that matters most to Colorado, not the street address.