Colorado is a blue state. As we’ve written many times in this space, there is simply no denying the results of the 2018 and 2020 elections in our state: Democrats won bigly and Republicans lost equally, uh, hugely.

But if you thought Colorado Republicans might do a little soul-searching and try to figure out a way to reverse this trend, you’ll be interested to know that the local GOP is all aboard the “election fraud” crazy train that has been crisscrossing red states in America for the past couple of months. Since Republicans don’t seem to know how to get more people to vote for them, they are actively working to figure out ways to make it harder for people to vote in general.

Republicans in the legislature are going after Colorado’s nationally-celebrated, all-mail ballot elections, trying to make it harder for people to vote in our state. Though even the Republican who brought the bill, Senator Paul Lundeen, has voted via mail. https://t.co/Gdh4ibEuLE pic.twitter.com/5E3HCoORf3

Meanwhile, the top two contenders to become the next Chair of the Colorado Republican Party are STILL OPENLY RUNNING on the idea that Donald Trump really won the 2020 Presidential election, facts be damned.

From the new Axios Denver newsletter:

Top leaders in the Colorado Republican Party are doubling down on the baseless idea that voter fraud cost President Donald Trump the 2020 election. [Pols emphasis]

Republican state lawmakers cited the potential for fraud as the reason they introduced a handful of bills that would make it harder to vote.

The top contenders for Colorado GOP chair, former Secretary of State Scott Gessler and current party vice chair Kristi Burton Brown, are advocating for a recount of the 2020 vote and review of the Dominion Voting Systems equipment in Colorado.

Why it matters: The Colorado GOP is embracing the same debunked claims of a stolen election that helped propel a mob of Trump supporters to attack the U.S. Capitol on Jan. 6.

Gessler has already had to find a new email provider after MailChimp cancelled his account for repeatedly spreading the evidence-free claim that the 2020 Presidential election was rife with fraud. 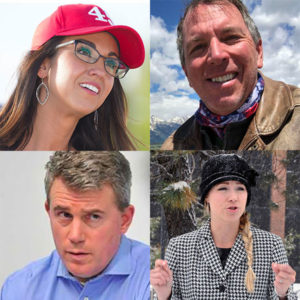 Nationally, the fraud rhetoric will be on full display this weekend at the Conservative Political Action Conference (CPAC) in Orlando, Florida; the keynote speaker is none other than former President Trump himself, which is problematic for any Republicans trying to establish a post-Trump political identity. As POLITICO notes, GOP contenders looking ahead to 2024 are finding that you can’t spell “Republican” without “Donald J. Trump”:

Conversations with more than a dozen Republican consultants, strategists and officials depict a party over which Trump exerts an irresistible gravitational pull, pointing to his continued strength in polls and the megawatt energy he generates among the GOP grassroots.

Trump’s grip on the Republican base and his effect on the minds of White House hopefuls is so total, they say, that the path to the GOP nomination is best defined by the degree of loyalty to Trump — to the point where party operatives reach for elaborate metaphors to best convey the extent of his influence.

Both Rep. Lauren “Q*Bert” Boebert (R-ifle) and Rep. Ken Buck (R-Greeley) are scheduled to speak at CPAC on Sunday. [Side note: Former Congressman and multi-time gubernatorial candidate Bob Beauprez is also speaking at CPAC for some reason] Boebert has not wavered from her claims of election fraud — though it wasn’t a concern in her district, apparently. Buck, on the other hand, has vacillated on the topic depending on the day he is asked; it would be no surprise if he repeated lies about 2020 election fraud in his speech on Sunday.

Trump’s insistence that the 2020 President election was stolen led directly to the terrorist attack on the U.S. Capitol on January 6. Trump’s role in stoking that insurrection made him the only President in American history to be impeached TWICE, though Senate Republicans were too weak-willed to do anything about it. You would think Republicans would be well-served by not trying to draw attention back to Jan. 6, but the GOP base is not so easily sated.

Republicans have plenty of other problems heading into 2022, including trying to explain their open embrace of white supremacy, but their stubborn refusal to stop talking about something that didn’t happen will keep them tethered to minority party status for the foreseeable future.